Mac Rumors Oct 24,  2013
Juli Clover Oct 24,  2013 Read Source
Oct 24,  2013
Read Source
Following the announcement of Apple's iPad Air and Retina iPad mini, multiple accessory manufacturers are preparing cases and other products to accompany the new iPads ahead of their November release. Below are some of the new product offerings from a number of well-known vendors, which should be able to ship before or shortly after the new iPads are available to consumers.

Additionally, there are several standard cases, including the $60 LapStand Cover, the $60 FreeStyle Cover, the $40-$50 FormFit Cover, and more that can be found on the Belkin site. The company also has an Apex 360 Advanced Protection case for the iPad mini, priced at $70.

Zagg has invisibleSHIELDs and keyboard Folio cases ready for the iPad Air. The screen protectors range in price from $30 to $35 and are available in high-definition and smudge proof varieties. The $100 ZAGGkeys Folio is available in black, with white coming soon.

Incipio has announced several different folio-style cases for the iPad Air, ranging in price from $35 to $70. There are also a range of folio and shell cases for the Retina iPad mini priced at $30 to $45, including the popular Smart Feather.

Griffin has multiple products coming for the iPad Air, including the $80 Slim Keyboard Folio and the $80 Survivor Case, which is similar to Otterbox's offerings. The company also plans to debut a $50 Back Bay Folio and a folio-style $40 Journal Case. Griffin is currently selling multiple cases for the Retina mini, including the Folio and the IntelliCase for $45 and $40, respectively.

Cygnett has debuted a range of folio cases for the iPad Air as well, each with varying colors and designs. Prices range from $40 for a basic fabric folio case to $70 for a leather origami-inspired case that can be folded into multiple stand angles. The company's flexi-folding Paradox cases are also available in several colors for $40.

Moshi has several different Retina iPad mini cases available, including the $50 VersaCover and the $45 Concerti Portfolio, along with multiple iVisor screen protectors priced at $30. The company also plans to debut similar cases for the iPad Air, retailing for $55 to $60. iPad Air iVisors will also be available for $30. 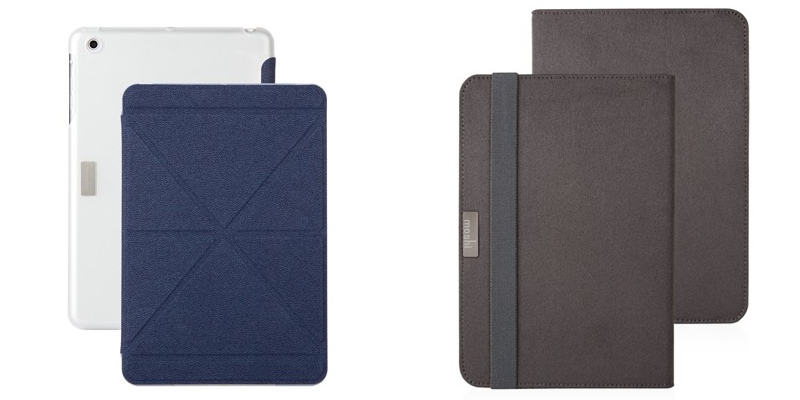 While the iPad Air has taken on a full redesign necessitating all new cases, the Retina iPad mini is just 0.3 millimeters thicker than the previous generation. It is unclear whether existing cases will fit the new Retina iPad mini, so consumers would be wise to check with vendors about fit before purchasing a first generation iPad mini case for the Retina mini.

Apple will begin accepting orders for the iPad Air on November 1, with orders for the Retina mini commencing later in November. As with the iPhone 5s, the company does not plan to offer pre-orders.