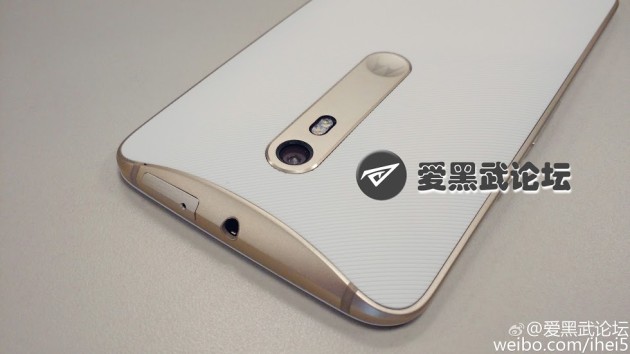 Just yesterday the rumored Moto X (3rd Gen) showed up in an array of pictures, and now it’s making its rounds on social media once again, only featuring a golden frame.

The image showed up on popular Chinese social media website Weibo, and has also been circulating Google+ by way of user hellomotoHK. The image shows that the Moto X (3rd Gen) could feature a golden metallic frame with a gorgeous white and textured back panel.

This could mean that Motorola will be offering a golden frame option in its Moto Maker this time around. Pricing could prove to be a little more expensive, as wooden backs through the Moto Maker also costed an additional charge. Considering that gold is the hip thing for smartphones this year, it wouldn’t be surprising to see an added surcharge for that extra glimmer on your smartphone.

We’re expecting to hear an official unveiling of the Moto X (3rd Gen) at Motorola’s press conference in New York City on July 28.

Only a few more days until we can see Motorola’s next big move.