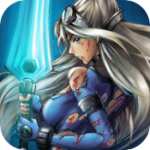 Late last year, a quirky little game called Sage Fusion [$2.99] was released on the App Store. It carried its fair share of problems thanks to its attempt to merge no less than three genres: point and click adventure, visual novel, and RPG. With aspirations to do three genres justice, it ended up not really doing terribly well at any of them. Furthermore, the game was a very short affair, being a simple first chapter of what was to be an epic story, an all too common occurrence on the App Store. Unlike many other first chapters on iOS, however, we've actually received a second (and concluding) chapter to this story, Sage Fusion 2 [$2.99].

The game's description proudly proclaims that story comes first, and it does not lie. If any part of the first game worked, it was the story, which introduced us to an interesting cast of characters and a fascinating world rich with its own mythology. It set up a conflict, and then just as soon as things were starting to percolate, it hit the player with a big ol' cliffhanger ending. Well, Sage Fusion 2 picks up immediately where the first game left off, and unlike the first chapter, it delivers on pretty much all of its story promises. All the cards are laid out, and by the end, virtually every question is answered and things are resolved pretty nicely. Unlike many other visual novels, there aren't really any choices to make that will result in alternate paths or endings, but I'd rather have one excellent story than a handful of mediocre ones, which is the usual result in visual novels. 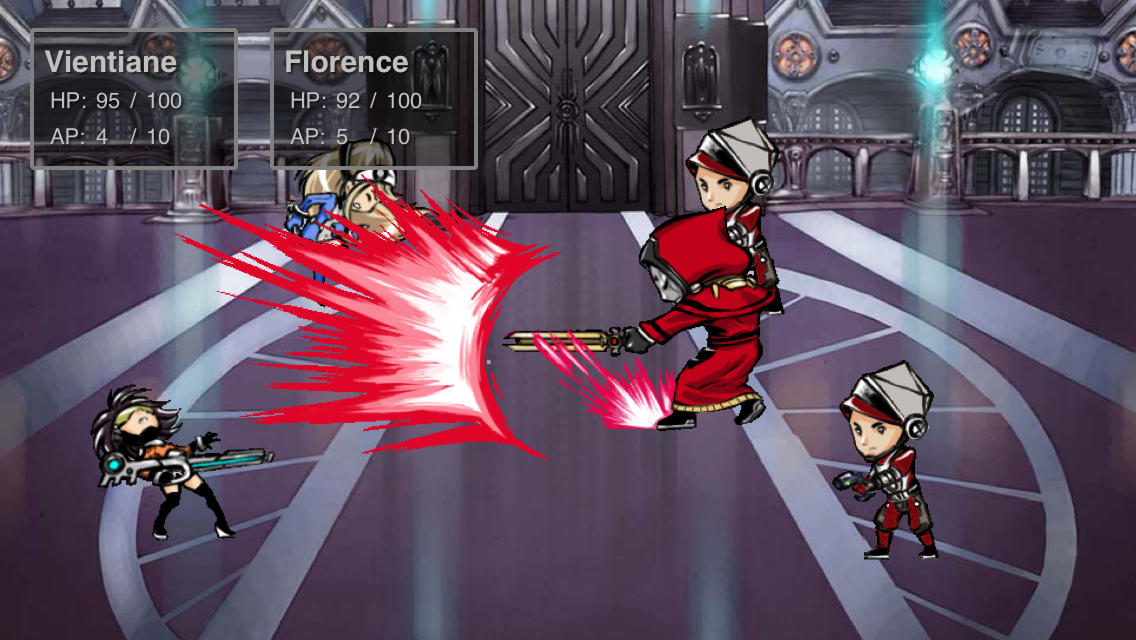 The cast of the first game all return with one notable exception, so you'll be back in the proverbial saddle with the tragic bodyguard Alvonse, the reckless merchant Marlon, and the mysterious agent Vi. While the first game was limited to just four playable characters, Sage Fusion 2 adds a few more to the roster. The interactions resulting from these new cast members give us a lot of new angles on the returnees, a welcome change from the sometimes isolated nature of the protagonists in the first chapter. There are also some new antagonists added to the cast, thankfully more interesting than the rather flat Brother Amon from the first game.

This increase in roster size helps address one of the issues from the first game, the utterly dull combat. Perhaps the biggest failing of the first chapter, length aside, is in its RPG mechanics. Battles play out Final Fantasy-style, with each side taking turns smacking each other until one side runs out of life. You have two stats to worry about in battle. Naturally, you have hit points, 100 to be precise, and if they run out, your character is down. If all of your characters are down, it's a game over. The other stat is AP, or action points. Every move you make in battle uses a certain amount of AP, from attacking to using items. At the beginning of each character's turn, a single AP will be restored, which will let you, if nothing else, use your weakest attack. 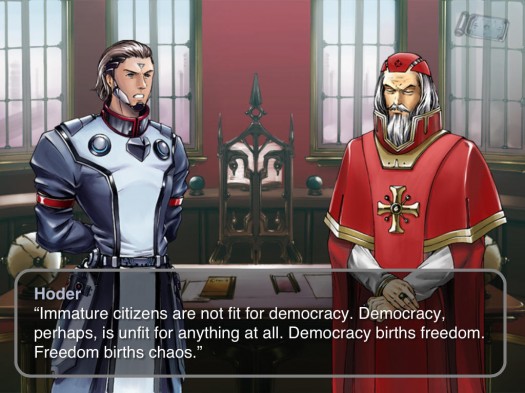 Of course, stronger attacks use a lot of AP, with your best attacks requiring a full ten AP to unleash. You could pass your turn ten times to get enough, but that wouldn't be very fun at all, right? Luckily, there's another way to build AP, and it's tied into the battle system's one interesting element. When a character is about to attack another character, a shield appears above that character's head. What you want to do is to touch the shield at the moment just before the attack lands. Doing so will result in your characters doing more damage with their attacks, and receiving less damage from the enemies. Successful defense also has the effect of restoring your AP. Even though it's turn-based, you'll need to pay attention at all times during battle, because timing those presses correctly is pretty much required if you want to win any battles.

This seems like a fun idea, and it does liven up combat a little bit, but it's really the only trick up the game's sleeve. I've heard it compared to Nintendo's Mario RPGs, but while those games constantly want input from you during battle, they tend to change up both the actions and the timing. Crucially, battles are generally short affairs in those games. The same cannot be said for Sage Fusion 2. Even random mooks take far too long to go down, which results in a tedium that you must pay attention to, a bad combination if there ever was one. In the first chapter, it was nearly insufferable, because you were always more or less using the same characters with the same handful of attacks. This one has a few new characters, adding a little more variety, and your maximum party size is increased to three, but it's still a serious issue for the game any time combat pops up. 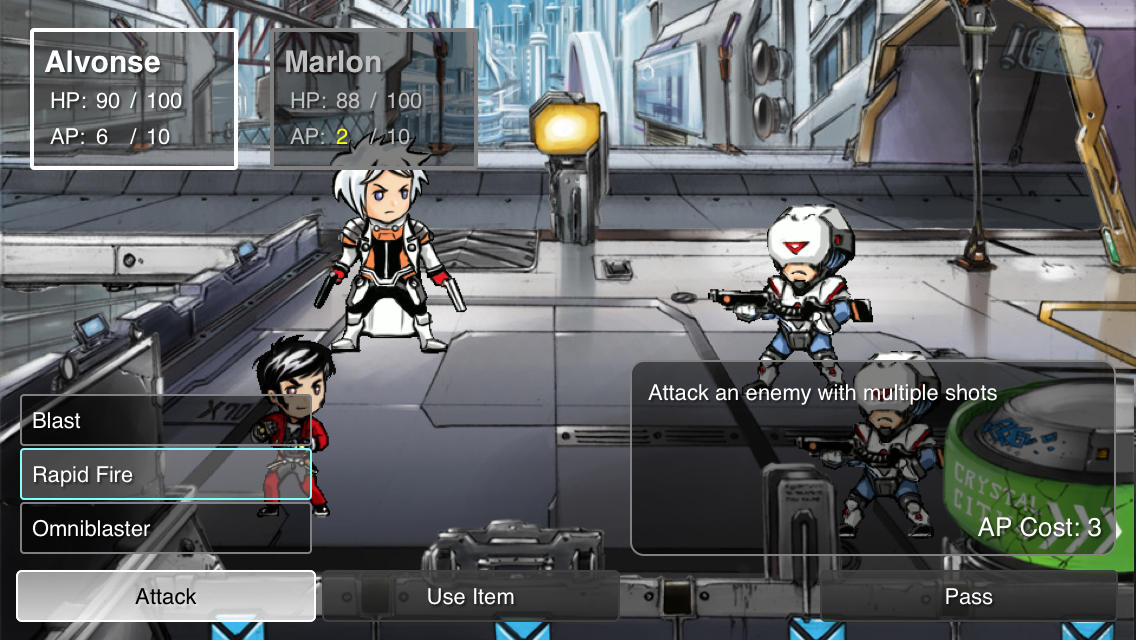 Fortunately, there are no random battles in Sage Fusion 2. Every single battle is scripted to happen, and you can't fight more even if you wanted to. This is where some RPG fans might cry foul, wondering how they can level up their guys if there are no optional fights. Well, lucky you! There isn't any leveling up nor are there any experience points in this game. Very rarely, a character will learn a new move due to a story event, but other than that, what you have at the beginning is all you will ever have. It might sound nice to have no grinding, but the end result is that battles feel even more pointless and aggravating, particularly when it's not an actual important story fight. While you can collect items to use in battle, these too are finite. If you use too many healing items in earlier fights, you'll probably get yourself into an unwinnable situation, because there's no way to replenish your stocks. 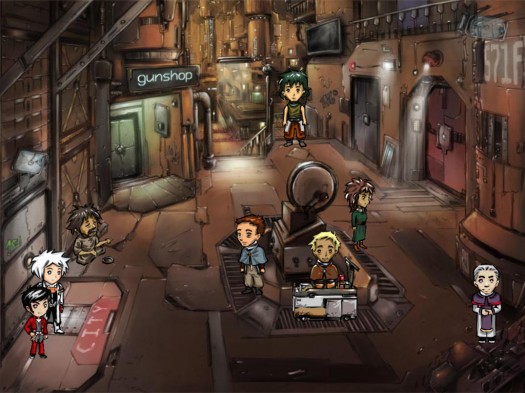 So, as an RPG, Sage Fusion 2 pretty much fails completely. Between the fights, though, you'll be playing something more akin to a very wordy point and click game. You'll have to pick up items and use them to solve puzzles here and there, talk to this guy to get that thing, and so on. The puzzles aren't terribly difficult, but they do take a little thought. None of the solutions are the insane sort that plague some of the more nightmarish point and click games, which counts in the game's favor. That said, there aren't very many puzzles at all, and with not one serious head-scratcher in the bunch, I can't say the game really delivers much for point and click fans. At the very least, the sometimes absurd backtracking you had to do in the first chapter is heavily curbed here.

The game is significantly larger than the first chapter, addressing what was probably the chief complaint with the first game. Virtually nothing has been recycled from chapter one apart from the nominal ship itself, and the number of areas you'll visit during the story surpass the original's size in both hard numbers and feel. You aren't just wandering around a small area on the surface of one planet this time, which is good, because nuts to games with spaceships that never use them. All told, I spent about six hours on this one, which was more than double what I spent on the first chapter.

What we're left with here is a pretty unimpressive point and click game married to some very badly implemented RPG mechanics, all wrapped up in the blanket of a visual novel with no actual branching choices. I don't think fans of any of the three genres it dips into are going to be terribly satisfied with its take on them. As a game, it's quite poor. The only way this game would be worth playing at all is if the story delivers. You see where I'm going with this, don't you? I regret, or possibly am delighted, to inform you that the story of this game is good enough to suffer this game for. It's fun, twisty, deep in lore, and written pretty sharply.

There are some English mistakes here and there, and in its effort to be stand-alone from the first chapter, it gets very exposition-heavy at times. Ultimately, though, whoever wrote the story of this game tackled an extremely well-trodden topic and, while they did not manage to say much new on it, they do raise some questions that are enjoyable to ponder, and build a believable world around those questions. It manages to handle some seriously heavy story beats without descending into schmaltz, and even throws in comic relief at appropriate moments to keep the whole thing from getting too dour. When I saw this second chapter was to be the last, I didn't have any faith in getting a proper conclusion to what was set up in the first chapter, and I'm pretty happy to have been proven wrong.

In short: Sage Fusion 2 is a story worth experiencing. I just wish it were attached to a better game.