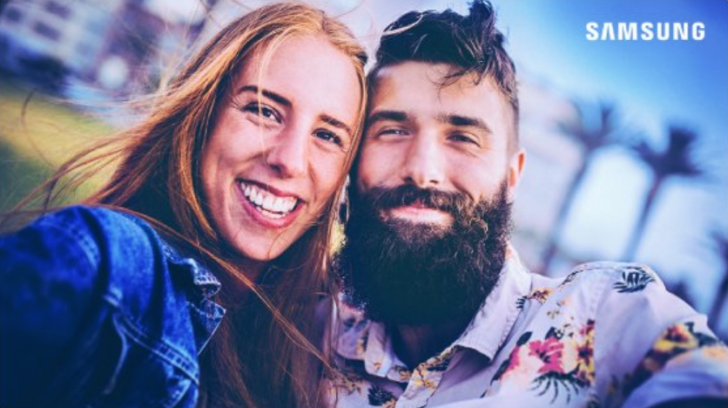 Remember when Huawei tried passing a photo from a $4,500 camera off as one from the then-new P9? Samsung Brazil's just done the same thing, but with a lot less justification, by attempting to pass a stock photo off as a sample from the Galaxy A8's front-facing camera - twice.

It's clear that Samsung intended to mislead. When translated, the caption on Samsung's tweet (which has since been deleted) reads:

A dating registered in many selfies. The front camera #GalaxyA8 has dynamic focus and highlights in the photo what matters most.

You'd think that it'd be easy enough to get some people to just take a selfie with a Galaxy A8, but someone at Samsung Brazil apparently decided it'd be easier to take a stock photo, edit it to make it more vibrant, throw a Samsung watermark on the top right, and pass it off as an A8 photo. Unfortunately for Samsung, a Twitter user discovered that the image, entitled 'Portrait of a beautiful hipster couple looking happy,' was actually from Getty Images, and it was uploaded in 2015 according to iStockPhoto data.

Interestingly enough, this wasn't even the only instance of this. Samsung tried doing this with a different photo, also to demonstrate the A8's front camera, but as it turns out, 'Boyfriend and girlfriend taking selfie, piggy back ride' was yet another Getty Images product. This picture's translated caption says:

Was that willingness to take a selfie? #GalaxyA8 camera gives you the incredible photo, ready to post.

Oops, sorry, you're right, Feliperas. The answer given before was not really correct. Many of the photos we post are taken using our smartphones, but some, like that, are images that also express the attitude of our target audience.

Each photo from Getty Images was $499, so it looks like that was a waste of $998 on Samsung's part. It probably would have been easier to have hired some actors and taken actual Galaxy A8 photos, but hindsight is 20/20. The Galaxy A8 has dual front-facing cameras (one 16MP, one 8MP), so the photos it produces can't be that bad... right?