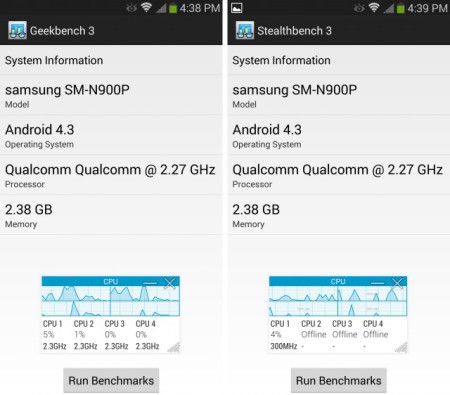 Back in July, it was uncovered that Samsung was artificially inflating their benchmark scores on the Galaxy S 4, and it looks like they are up to the same old trick again, this time with the Galaxy Note 3. Arstechnica found that the Note 3 “blows the doors” off LG’s 2.3GHz Snapdragon 800. That would be fine if Samsung was using a different processor, but they aren’t. They are using the same exact Snapdragon 800 clocked at the same speed. There has to be something going on right?

It appears Samsung has a special high-power CPU mode on the Galaxy Note 3 that kicks in when it runs popular benchmarking apps. This is very similar to what was going on with the Galaxy S 4, but that involved the GPU and it was only on the international version. This time, it’s the U.S. version. In this special high-power mode, all cores are active and none of the cores are allowed to shut off like when other apps are running. It’s triggered by package names from the most popular benchmarking apps, so if Geekbench is loaded, the mode will kick in.

When this happened in July with the Galaxy S 4, Samsung responded by saying they didn’t do anything on purpose. They claimed the phone would run at higher frequencies for apps used in full-screen mode, but also demanded substantial performance. Benchmarking apps would obviously fall into this category and so would the S Browser, Gallery, Camera, and Video Player. In other words, Benchmarking apps were just an innocent bystander. They explained it as providing an “optimal performance” for their customers. This is an entirely different situation in which, Samsung purposely set this high powered CPU mode to kick in when certain package names are running, namely benchmarks.

In the end, it really doesn’t matter to me, and it shouldn’t matter to you. Benchmarks are useless in the real world, but the fact that Samsung is cheating at something isn’t going to bode well. It will be interesting to see how they respond to this.

Come comment on this article: Samsung caught juicing benchmarks again, this time with the Galaxy Note 3