We might now be seeing one of the first proofs of Android 4.4's ability to run on lower end hardware. Samsung has rather quietly outed the Galaxy Ace Style in Germany with rather mediocre specs but also with the latest software.

Samsung has been known to put out low- to mid-tier smartphones, and sometimes in droves, but those have usually played around with older Android versions, Android 4.2 probably being the most recent. Now, however, we might be seeing the first budget smartphone that will lay claim to Android 4.4's promise of svelte performance even on less capable devices.

In that sense, the Galaxy Ace Style is actually unremarkable. You have a 4-inch display with a measly 800x480 pixel resolution. The processor is an unnamed 1.2 GHz dual core. The amount of RAM is unknown, but it would most likely be 512 MB. You have 4 GB of data storage though it was noted that only 2 GB is actually available for the user to use. There are supposedly both single and dual SIM versions available. But the highlight of this smartphone will definitely be the software. This little device runs not only Android 4.4 but apparently even the same version of TouchWiz on the Galaxy S5, though that bit still needs to be confirmed. 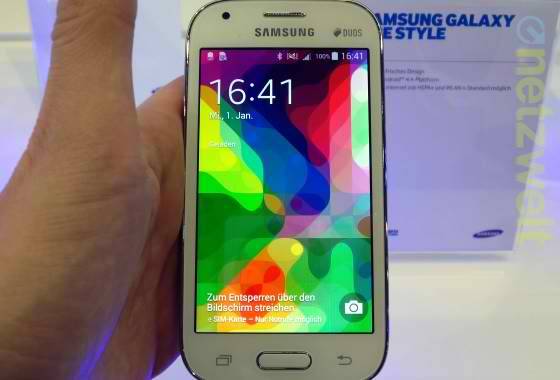 The Galaxy Ace Style has so far been spotted only in Germany and market availability is still unknown. Word is that it will fetch a price of around 200-300 euros, which is roughly $274 to $411. This might be a device worth keeping an eye on if only to really see how such types of devices will be able to handle the latest Android version.