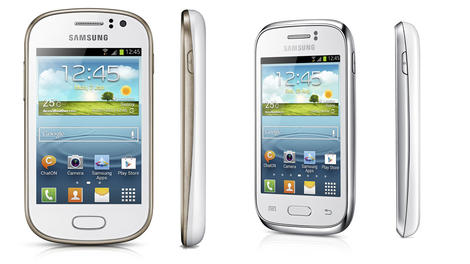 It was initially thought that the Galaxy Frame would be unveiled at MWC 2013 in Barcelona, but Samsung clearly couldn't wait until then.

Design wise, both handsets borrow heavily from the Samsung Galaxy S3, as do all the new Galaxy handsets - probably in an attempt to get away from any potential law suits with Apple.

Jelly Bean for all

Probably coming in slightly cheaper than the Frame, the Samsung Galaxy Young has a smaller 3.27-inch display, the same 1GHz processor and Jelly Bean OS - but surprisingly more RAM at 768MB.

NFC doesn't feature on the handset and you only get a 3MP camera round the back, while the Bluetooth technology is version 3.0 instead of the Galaxy Frame's 4.0 offering.

TechRadar spoke to Samsung regarding pricing and availability of the Galaxy Frame and Galaxy Young, with the manufacturer confirming that "availability for the UK will be week commencing March 25."

Both handsets will likely be knocking around MWC 2013 at the end of February, and we'll be there to get hands on with both of them, so stay tuned for our early findings.