Samsung Galaxy J7 Max To Be Launched In India This June

In an effort to combat the increasing presence of Chinese brands in the Indian subcontinent, Samsung is rumored to release its latest budget handset, the Samsung Galaxy J7 Max, in India by the second week of June. If the leak posted on the Tekz24 website is correct, then it is quite clear that Samsung will attempt to combat the Chinese manufacturers in providing the best bang for the buck proposition to Indian consumers.

According to the leak, the Samsung Galaxy J7 Max will sport a 1.6 GHz octa-core MT6757v processor from Mediatek. The device will also have a 5.7-inch full HD TFT display, which will be powered by a 3,300 mAh battery. The handset will likely have 32GB of internal flash storage and 4GB of RAM, which is more than enough for consumers interested in budget devices. A 13-megapixel sensor could also be found in both the rear and front cameras, with a front facing flash included to illuminate selfies taken during the dark. Installed on the device is Android 7.0 Nougat, which is the same Android OS version installed in the Samsung Galaxy S8 and Samsung Galaxy S8 Plus. Also installed in the device is the Samsung Pay Mini Application, which is a version of Samsung Pay primarily used for online transactions.

Aside from the spec sheet, also included in the leak is a table comparing the Samsung Galaxy J7 Max with the most popular products from the Chinese brands. Among those compared are the OPPO F1s, the Vivo V5, and the OPPO F3. Samsung emphasized some of its handset’s hardware and software features that are better than those available from the Chinese competition, like larger and higher resolution display, installation of the latest Android OS version, and support for Samsung Pay Mini Applications. The Samsung Galaxy J7 Max also sports comparable specs in terms of front and rear camera, and internal storage. However, in terms of camera optics, Samsung takes pride on the improved low light photography due to the wider aperture of the front and rear cameras of the Samsung Galaxy J7 Max. All of these impressive specs are found in a budget device that will likely be priced lower than 20,000 Indian Rupees ($311), with the launch scheduled for the second week of June. 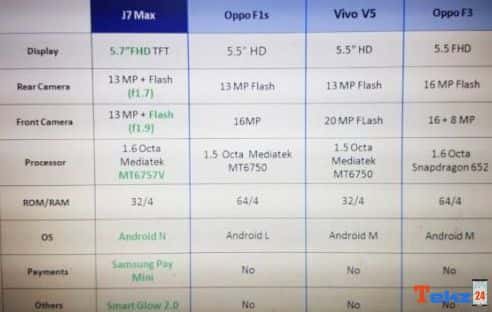 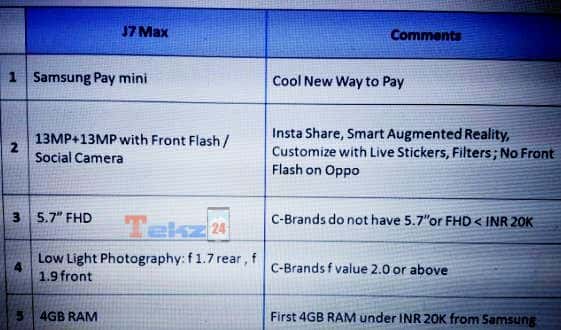 The post Samsung Galaxy J7 Max To Be Launched In India This June appeared first on AndroidHeadlines.com |.