The Dual SIM Samsung Galaxy J7 Max is being prepared for a release in India in the near future, as evident by a leaked screenshot of what the generously-sized smartphone will offer in terms of hardware specifications. The revealed Galaxy J7 Max specifications point to a mid-range Android-powered device that should be able to cater to users who would like to own a phablet from a well-known manufacturer without having to pay a premium for it.

The Samsung Galaxy J7 Max will allegedly be powered by an octa-core 1.6GHz Mediatek SoC (System on Chip), accompanied by 32GB of internal storage, 4GB of RAM, and a 5.7-inch Full HD TFT (Thin Film Transistor) display panel. Both cameras of the device will feature 13-megapixel sensors, the leak reveals, though the main camera will likely perform better than the other one due to its aperture of f/1.7 compared to f/1.9.

Based on the leaked slides, the direct rivals to the Samsung Galaxy J7 Max are the F1s and the F3 from OPPO and the Vivo V5. All three of those handsets will arrive in a smaller form factor due to their 5.5-inch displays. Apart from different camera sensors, the Galaxy J7 Max will ship with Android 7.0 Nougat running out of the box, unlike the rest of its competitors that feature older versions of Google’s ubiquitous operating system. The device might also stand out from the rest due to its support for Smart Glow 2.0 and Samsung Pay Mini. The inclusion of Samsung Pay Mini should be able to resonate with the growing number of smartphone users who enjoy the convenience of making online purchases. Expect Samsung to introduce the Galaxy J7 Max within the first fortnight of June in India, as it arrives in shades of Black and Gold. Pricing details remain unconfirmed at the moment, although the device should not cost more than 19,000 rupees, which translates to approximately $312. While it remains to be seen whether the South Korean consumer electronics manufacturer manages to maintain its momentum in India in the future, an update on its efforts to do so should follow in the coming months. 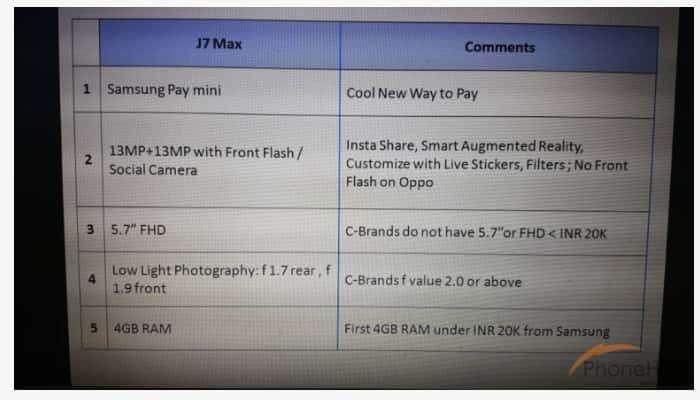 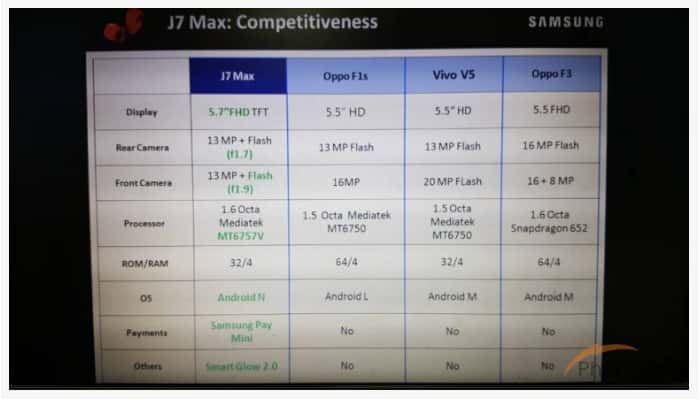