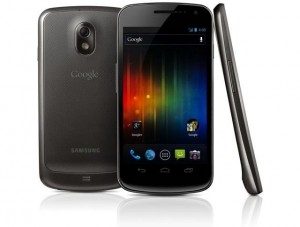 Based on the above definitions you wouldn’t think that Samsung’s Galaxy Nexus (SGN) is actually a culmination of anything good, particularly in the way of an Android phone.  Literally, the name alone would indicate that you would have a billion stars connected together.  But you would be wrong.  The Samsung Galaxy Nexus is the best smartphone on the market today - bar none.

After living with this phone for almost a month now, it has not only met my expectations but have exceeded them in almost every way.  I will spare all of the tech specs as the SGN has been in the public eye for quite some time now, and I will largely review the phone on its day-to-day merits for real world use.  My must have apps are: Google Voice, K-9 for work email, AndChat for always-on IRC connectivity, Plume for Tweeting, Catch Notes,  Facebook, and all other Google services.

The first thing you will notice about the SGN is that it looks like a smaller brother to its Honeycomb forerunners, i.e. no physical buttons.  No, Android 4.0 has eschewed the buttons for a cleaner look and a better way for landscape to portrait screen orientation that moves the buttons with the phone.  There is a downside however, for those who depended on the ‘magnifying glass’ button for search it has been replaced by a Google search box on the main screen. 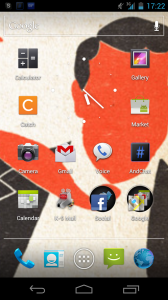 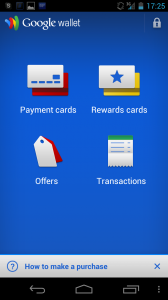 The second thing?  The Screen is HD Super AMOLED.  This.  Thing.  Is.  For.  Real.  I won’t bore you with the specs but here they are if you need confirmation.  Just before getting the SGN, I briefly flirted with an iPhone 4 as a backup phone and the SGN makes the Retina Display look second rate at best.  The viewing angles of this device are marvelous as is the resolution: a proper 1280x720 pixels.  Movies look gorgeous, especially those from the PIXAR family and applications look vibrant and almost have a 3D like quality to them.

As with most of the Samsung Galaxy phones, the lock screen will be familiar and the volume buttons, but there is some strange placement afoot.  Namely the charging port and 3.5mm headphone jack on the bottom of the phone.  I use to have the Samsung Fascinate and they were on top of that device.  The top is a much better place to have any cables/wires coming from as they will not get in the way of putting the phone in normal portrait mode, like say, in a windshield holder.  The power button is on the upper left side all by its lonesome.  The actual heft of the device is one that is much lighter than it looks but that’s to blame/credit on the plastic body.  While I do prefer the design and the materials of the iPhone 4, I was always very deliberate when using it because I was afraid of dropping it.  I do not like having cases on my phones so while the SGN does not feel like it will shatter from a three foot fall, I still handle it very gingerly.  But even with the larger size the phone feels very thin and light and not as large as my old Motorola Droid X or my very old HTC HD2. 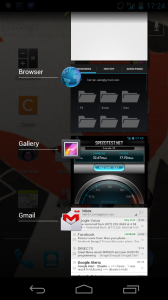 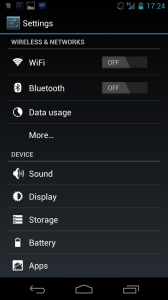 Some other niggles with quality and build is the back battery door.  It is very thin and flimsy and I have already bent one of the tabs on the bottom of that keeps it locked.  So be very careful while exchanging batteries.  Which brings me to my next point.  You will be changing out the battery if you are a normal to heavy user.  Regularly.  When I got my phone, I immediately bought the battery charger that came with an extra battery.  Then I bought two more batteries from a Twitter friend of mine who bought the extended batteries for his and didn’t need the standard ones anymore.  I was thinking of the extended batts but didn’t want the extra thickness.  So I now have four batteries total that I keep in a very thin case that can fit into any jacket and can go for about two days without any external charging.  The Verizon 4G is spotty at best and I have only used it a few times, but mainly just to check the speed.  But boy, is it FAST!  I have seen downloads as fast as 35mbps and it can make your SGN double as a hand warmer when activated.  I do have PDAnet installed so I occasionally use it for wired tethering, and in this case is very helpful since phone can be charged at the same time.

While trying to get as much battery life as possible, I sometimes turned off the auto-sync, but what’s the upside to a smartphone that is not constantly getting data and updates?  So now I turn it off only when I am at my computer to not duplicate email alerts, etc.

Okay, now for the software.  Android 4.0 AKA Ice Cream Sandwich (ICS) is everything I wanted in a smartphone.  While I have been recommending Android to many people, I still tell some to get an iPhone if they just “want it to work”.  And ICS is the first version of the software that truly feels like production software and not a Beta that is meant to be forgiven from the onset.  Just like a proper desktop OS, the addition of folders has saved screen real estate and helps organize applications for easy look up.  And now that my Motorola XOOM was blessed with ICS, I have a double helping of goodness.

The browser is finally like a true mobile version of Chrome.  The menu button gives context for bookmarks and sharing options and even a new feature "Request desktop site" as well as the way to access the Settings.  The address bar button gives you options for "add a tab" and bookmarks.  You can also view other browser sessions as thumbnails with the same button.   Also, you can no longer just long press the screen to add widgets.  These are now found along with all of the other applications just a swipe away.  Long presses now just give you a way to change wallpapers. 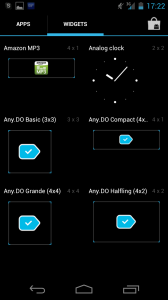 The notifications are now easier to delete as they can now be swiped away from the window shade, while the screen is locked.  This makes it much easier to interact with the phone when just looking at the screen for the notification LED to blink. 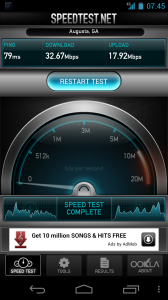 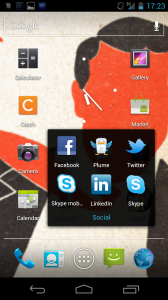 As far as I can tell, the phone feature is very good.  I can hear other callers loud and clear and have had no complaints from others, however the speakerphone sounds muffled and a bit thin.  The new phone dialpad UI is very Tron-like, courtesy of Android's new Roboto fonts. 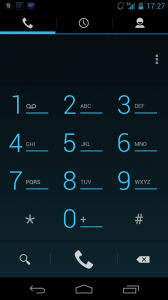 The camera is good and very fast but not as good as the Samsung Galaxy II’s but since I still carry a Canon ELPH 300HS, this is not an issue with me.  And I am never thrilled to see a soft shutter button.  But it can be used from the lock screen now: left for Camera, right to Unlock.  I don’t use my SGN for viewing movies regularly (just to show others how good the screen is) and I don’t use it for MP3 listening it is a competent media player but not a primary use for me.

This last feature that I have used a lot for this article is the ability to easily take screenshots.  Just hold the power button and volume down rocker simultaneously and voila!  The screenshot saves into its own Screenshot folder in your gallery and it's very easy to show others what is going right and wrong with your phone as well as post pictures like I have done.  No more rooting your phone and sticking your tongue out and holding your arm out to get a decent screenshot. 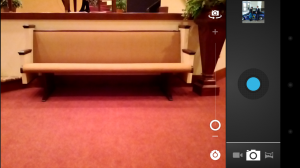 I can honestly say that after using and owning many Android phones, the Samsung Galaxy Nexus is the best phone out there right now.  And while a few may come along this year to compete against it, the SGN will still be at the top of the list for me.