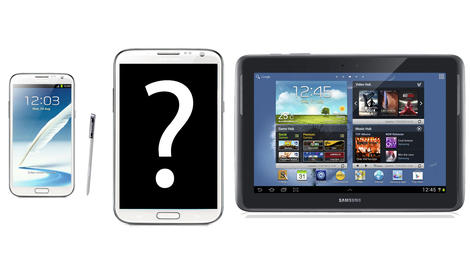 Apparently developed under the codename "Kona", the Galaxy Note 8.0 seems set to be the name the tablet will go to market with.

Although not yet officially confirmed there's an awful lot of talk on the web that Samsung is readying a new, S-Pen wielding slate to slip between the two devices currently making up the Note family.

In fact Samsung's Head of Mobile, JK Shin has apparently confirmed that the Galaxy Note 8.0 will indeed arrive at MWC 2013 in Barcelona.

Although Samsung already has the Galaxy Tab 7.0 and Galaxy Tab 7.7 on the market, it may be that the company sees the Galaxy Note 8.0 as it's best chance of directly competing against Apple's 7.9-inch iPad mini, given its unique styus-based spin.

Everything seems to point to an MWC 2013 unveiling for the Galaxy Note 8.0, with Samsung's Head of Mobile even reportedly confirming a Barcelona launch.

MWC 2013 kicks off during the last week of February, but don't go thinking you'll be able to lay your hands on the Galaxy Note 8.0 anytime soon, as it will probably take a month or two to reach stores.

We'd expect to see the Galaxy Note 8.0 carry a healthy price tag as it will be competing more with the iPad mini than the likes of the budget focussed Nexus 7 and Kindle Fire HD.

The iPad mini starts at £269/$329/AU$369, so in true Samsung fashion the Galaxy Note 8.0 will probably look to undercut its Cupertino-based rival in an attempt to pull customers away from Apple.

Unsurprisingly the Galaxy Note 8.0 will sport, yes, you've guess it, an 8-inch display, with early reports suggesting it will pack Super Clear LCD technology and a decent 1280 x 800 resolution.

If true it would mean the Samsung Galaxy Note 8.0 would have an ever-so-slightly better display than the iPad mini, but there's not a lot in it.

The Samsung Galaxy Note 8.0 will almost certainly come running Android Jelly Bean out of the box, but whether it will be version 4.1 or 4.2 is still up for debate.

According to SamMobile the Note 8.0 will indeed ship with the very latest version of Jelly Bean - Android 4.2 - which would be excellent news for anyone interested in picking one up.

There have been a couple of specification leaks regarding the Samsung Galaxy Note 8.0 recently, both of which come via SamMobile.

A second set of specs turned up a few days later claiming to be from Spanish marketing material for the Galaxy Note 8.0.

This leak revealed that the slate is likely to pack a 1.6GHz quad-core processor alongside the 2GB of RAM and 5MP camera, but this report suggests you'll only get 16GB of internal memory.

Samsung could well offer the Galaxy Note 8.0 in both 16GB and 32GB variants, as well as having the option to throw in 3G connectivity if you so wish.

If you require a web connection on the go then the portable Galaxy Note 8.0 should have you covered, with details appearing online about three variants of the tab.

Apparently you'll be spoiled for choice when it comes to selecting the right Galaxy Note 8.0 for you, will the tablet set to come in Wi-Fi only, Wi-Fi + 3G and Wi-Fi + 3G + 4G guises.

The first glimpse we potentially got of the Samsung Galaxy Note 8.0 came via SamMobile; the site was sent a snap of a Spanish listing for the tablet revealing some specs alongside photos of the front and back of the tablet.

The Samsung Galaxy Note 2 design is reinforced in our second set of photo leaks, this time showing the Galaxy Note 8.0 taking a ride on public transport.

Interestingly in these sanps the Galaxy Note 8.0 is sporting a physical home button flanked by touch sensitive back and menu keys, as found on the smartphone and it's something which didn't feature in the image above.

Last up, for now anyway, is a snap found by French site FR Android which sees the supposed Galaxy Note 8.0 sitting beside the Galaxy Note 2.

The famous Samsung button set up from its smartphone range is present once again on the front of Galaxy Note 8.0 making it look more like a phone than a tablet.