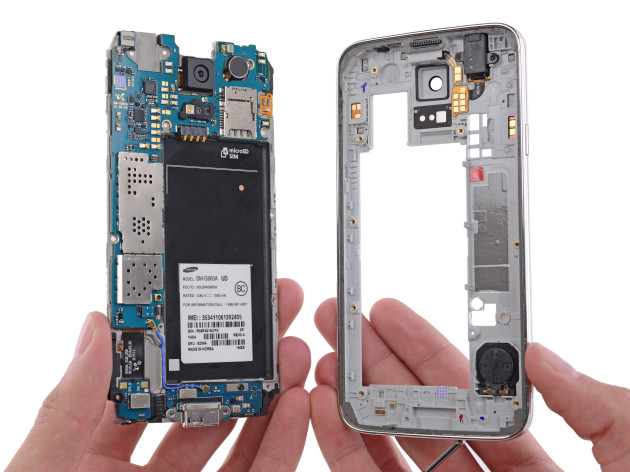 We had a chance to see a teardown of the Galaxy S 5 last month, but we were still awaiting iFixit’s version. The previous teardown made it clear that the GS5 won’t be easy to repair, and iFixit agrees 100%. After a complete teardown, they concluded that the Galaxy S 5 is a 5 out of 10 for repairability.

The biggest issue is the display. Unfortunately it needs to be removed first in order to replace any part other than the battery. The display has a “significant amount of adhesive,” which makes it very difficult to remove without damaging it.

Last year’s Galaxy S 4 received a score of 8 out of 10, which is a big difference, and one of the reasons why Samsung has stayed with plastics. However, last year the display wasn’t in the way of replacing other components. I guess if there is any good news out of this, the GS5 didn’t score as bad as the HTC One (M8), which came in at 2 out of 10.

You can check out the video below, which goes through a lot more detail on how difficult it will be to repair your Galaxy S 5.

Come comment on this article: Samsung Galaxy S 5 repairability not looking so hot