Need more evidence that Samsung is looking to bring out a more powerful version of their 2014 flagship Samsung Galaxy S5? The device — which we’ve been calling the Samsung Galaxy S5 Prime to this point — has popped in a Hong Kong pricing database. It’s listed as the Samsung SM-G906S, which is the same model number that leaked on Samsung’s own site a while back.

The listing doesn’t tell us much more than we already knew, but most its specs fall in line with the most recent rumors. Said rumors suggest the device will look and feel pretty much like a Samsung Galaxy S5, except you can expect 3GB of RAM and a 5.1-inch 2560 x 1440 Quad HD display.

One discrepancy that contradicts with recent rumors is that the device will be coming with a Snapdragon 805 processor instead of the Octa-Core Exynos 5430. That may not mean much, though, as Samsung has never shied away from using different chipsets for different markets in the past.

New information gleamed from the listing suggests it’ll launch with Android 4.4.3 KitKat, an Android upgrade that doesn’t even officially exist yet.

Everything else is largely the same. It’s listed with a 16 megapixel rear camera, a 2 megapixel front camera, has a microSD card slot that can support up to 128GB of storage, will have LTE radios, and will come with the usual connectivity options of WiFi, NFC, Bluetooth, and microUSB. 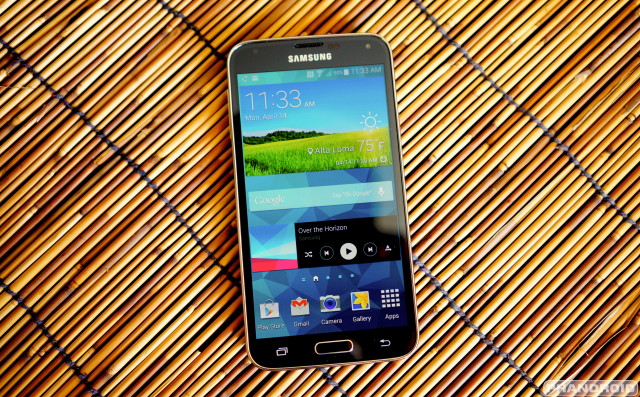 It’s the phone we thought Samsung would be bringing to us in the first place, but alas it will take this second release to bring everyone the goods they were waiting for. The listing has the price set at $5,020 Hong Kong dollars, which comes out to about $650 over here in the states. That sounds about right for a device of this caliber, though we expect Samsung to go with a more traditional number whenever it is slated to launch over here.

Many of you expressed discontent with Samsung’s decision to bring this smartphone after the base Galaxy S5′s launch, and that’s understandable. It’s not fun to hear that the device you really wanted is going to come out after your return period is already up, but that’s what’s likely to happen, and there’s nothing we can do about it at this point.

We’re still waiting on details in terms of availability windows, though Qualcomm’s late 2014 availability of the rumored Snapdragon 805 processor should give us a hint that it won’t be here until late summer, or fall at the latest. Let us know what you think about the Samsung Galaxy S5 Prime, and don’t be shy to share your thoughts with the folks over at AndroidForums.com.