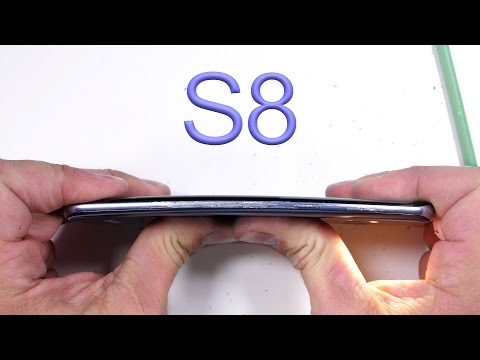 The Samsung Galaxy S8 is about to officially launch in the US, and while reviews for the smartphone, and its larger brother the Galaxy S8 Plus, have been mostly positive so far, some people might still have questions about how much abuse the phone can take. Thankfully, the popular JerryRigEverything YouTube channel is willing to spend the money to try to scratch, burn and bend their copy of the Galaxy S8.

The team says the Gorilla Glass 5 that’s placed on the front of the Galaxy S8’s display offers about the same amount of scratch resistance that’s expected on most smartphones that are made today, so that’s good news. What’s not so good, according to them, is the speaker grill on top of the display. It’s recessed inside that glass, which could make it collect a lot of lint over time.

The back of the phone is also made of glass, and the video mentions that the glass even covers the flash for the rear camera, which is something that the team has not seen before on other smartphones. The ring that surrounds the rear camera is made of metal and should protect the lens if the phone is placed on its back. The fingerprint scanner still worked (almost) every time, even with extensive scratches. The side frame of the Galaxy S8, along with its buttons, is made of metal, and the back of the phone is recessed inside that metal frame.

The team placed a flame next to the phone's screen. It took 30 seconds for the display to be affected, and even then it fully recovered with no noticeable issues.

The burn test on the Galaxy S8’s display seemed to go very well. The team placed a flame next to the phone’s screen. It took 30 seconds for the display to be affected, and even then it fully recovered with no noticeable issues. Putting the phone through a second test of the same length had the same result. The third time finally caused the display to get a permanent mark due to the heat of the flame.

Finally, the team hit the Galaxy S8 with its bend test. To no one’s surprise, it had almost no flex issues during that test, and the seals in the phone also remained in place, which means that it will continue to stay water resistance even after a lot of use. All in all, JerryRigEverything seems to be impressed with the build quality of the Galaxy S8, but we would still recommend you get a good case and screen protector for the phone, just in case.