Samsung has enjoyed much success with its Galaxy S family of smartphones. But now it seems like every mobile device that comes from the company has the “Galaxy” name on it. Samsung’s spiel might be that it is using the name to provide a unified brand across its products, but part of me suspects that they’re also trying to ride the coattails of the Galaxy S’s wins. The end result is confusion for the consumer.

This is the first time Samsung is offering an eight-inch tablet in the Tab family (the company also offers the S-Pen-equipped Galaxy Note 8.0), so I was curious to see what it had to offer. In my week of testing, I found the $300 Galaxy Tab 8.0 to be a solid tablet, with a nice combination of portability and larger display for reading e-books and viewing videos. Its built-in multi-window feature is great, since it allows you to work in two apps at once, which you can’t do on the iPad. You can also use it as a remote control, and performance was smooth. 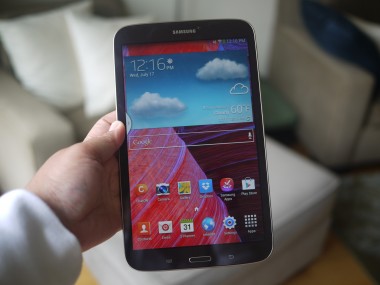 That said, it has a significantly shorter battery life than competing tablets like the Apple iPad Mini and Google Nexus 7. It also has a lower-resolution screen than the Amazon Kindle Fire HD 8.9, which costs about $30 less. Given these shortcomings, the Galaxy Tab 3 8.0 wouldn’t be my first choice in mid-size tablets.

The Galaxy Tab 3 8.0 is a good-looking device. It measures 8.26 inches tall by 4.87 inches wide by 0.27-inch thick, and weighs 0.68 pounds. It’s slightly taller than the iPad mini, but lighter and smaller than the Kindle Fire HD.

I took it with me on a quick flight up to Portland over the weekend, and easily stored it in my big purse. I also had no problem holding it in one hand to read an e-book, using the Amazon Kindle app. My only criticism is that the plastic back makes it slick. I much prefer the texturized back of the Nexus 7.

The tablet’s eight-inch touchscreen has a resolution of 1,280 by 800 pixels. That’s the same resolution as the Nexus 7’s seven-inch display, but that extra inch of screen real estate made a difference when watching movies and reading Web articles. It’s also sharper than the iPad mini’s 7.9-inch, 1,024 by 768-pixel touchscreen, but the Kindle Fire HD’s 8.9-inch screen bests them all with a 1,920 by 1,200 pixel resolution.

I’m not one for taking pictures with tablets, but the Galaxy Tab 3 8.0 has a five-megapixel camera on the back, and a front-facing 1.3-megapixel camera. The Kindle Fire HD doesn’t have a camera, and the Nexus 7 only has a front-facing camera. Picture quality is decent, though like many mobile devices, it struggles with indoor environments.

The tablet only comes in a 16 gigabyte model, but it has a microSD slot for more storage space.

The Galaxy Tab 3 8.0 runs the latest version of Google’s Android Jelly Bean operating system (version 4.2), and comes preloaded with a number of extra apps. Many of them are Samsung services, and require creating an account, which I didn’t want to be bothered with. 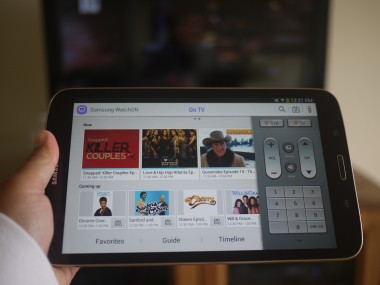 But I did like Samsung’s WatchOn service, which turns the tablet into a universal remote. You don’t have to create an account to use it, and I was able to connect it to my Samsung TV and Motorola cable box, using the step-by-step guide. The in-app program guide does a nice job of showing you what’s currently on air or coming up. You can also search for content by genre.

Like some of Samsung’s other tablets and smartphones, the Galaxy Tab 3 8.0 has a multi-window feature that allows you to view and work in two apps at once. It’s not immediately clear how to use it, and you first have to turn the feature on from the Notifications window. Once you’ve opened an app, you can press the little tab that appears on the left-hand side of the screen and drag another app over to view it on the same screen. 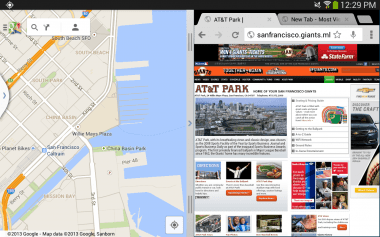 One thing to note is that multi-window currently supports only about 20 apps right now. This includes the Web browser, video player, the Polaris Office Suite and Facebook. Still, I found the list of supported apps to be adequate for my needs, and it was useful for tasks like viewing email and calendar all at once.

A 1.5GHz dual-core processor from Samsung powers the Galaxy Tab 3 8.0. In general, the tablet felt responsive. Apps launched almost immediately, and I didn’t experience any crashes during my testing. Still, it didn’t provide quite the snappiness of the Nexus 7, which has a quad-core processor.

In my harsh battery test, where I set the screen brightness to 75 percent and played a video in a continuous loop, with Wi-Fi and email running the background, the Galaxy Tab 3 8.0 lasted just five hours. Meanwhile, Kindle Fire HD offered nine hours and 28 minutes; the iPad mini and Nexus 7 came in at more than 10 hours.

While the Samsung Galaxy Tab 8.0 offers a good mix of portability and screen size, its mediocre battery life drags it down. If you’re after a tablet in the mid-size range for consuming all types of media, the Kindle Fire HD will get you a better screen and battery life for less money.