Samsung’s Galaxy View was a behemoth of a tablet, a huge 18.4 inch device, that was good for people who spent their day on the couch watching TV shows obsessively. Now the device gets a follow-up, the often leaked Galaxy View 2, which we actually haven’t heard of in a while. Now the machine appears again, courtesy of some certifications by Bluetooth and WiFi organizations.

Samsung Galaxy View 2 is expected to be a tad smaller, at 17.5 inches in diagonal and it’ll offer a Full HD resolution. An S-Pen could also happen, but we can’t guarantee it. There could also be a handle in order to carry the product around. The codename T927A also points towards a debut on AT&T, fitting the recent rumors. This will be by no means a powerhouse of a device, but rather one with a midrange Exynos CPU tops. 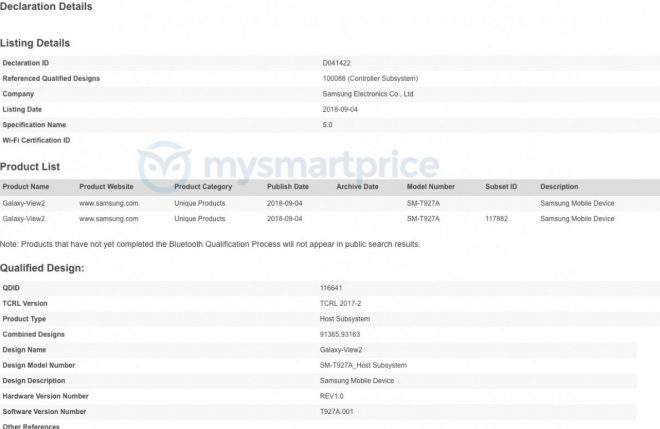 It should also have 3 GB of RAM and it’ll lack DeX support probably. Samsung Galaxy View is expected to use an USB Type-C port for charging, which is new, since the previous one had a laptop type plug. Its kickstand is going to be replaced with a hinge for extra flexibility, when you adjust the view angle. Samsung is going to debut this on carriers, most likely with bundled streaming services and offers.