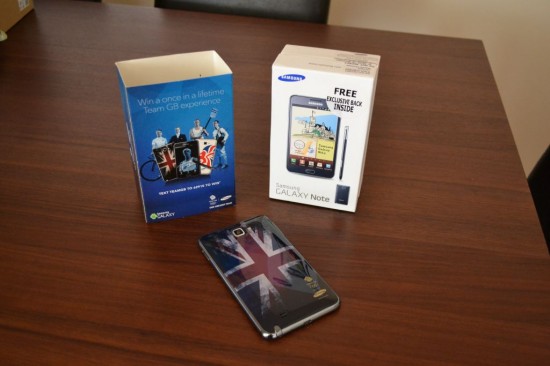 Last week we saw Samsung’s latest tie-in ad for the Olympics featuring soccer star David Beckham and the Galaxy Note, and today we are learning of a new special offer for the same handset. Samsung has launched an “Olympics pack” featuring an exclusive Olympics-inspired back cover for the Galaxy Note. The exclusive deco seems to be available in the UK only and features one of several Team Great Britain designs. In this case we see a stylishly faded Union Jack, but judging by the packaging other options are available. The Note is also said to feature a special Olympics software skin and pre-installed apps for the summer games.

We don’t know much about the availability of this particular version of the Note, but it is suggested that all in the UK purchasing the handset in the near future will be receiving the Olympics edition. It is also the version of the phone that will be given to Olympic athletes.