Samsung’s Galaxy S8 Active has shown up in some new leaks today giving consumers the best look at the device yet. In the gallery of images below, the device is shown off in a series of hands-on type shots, and they paint a pretty good picture of what to expect, while also displaying the phone from just about every angle and even showing off some of the user interface. Of course, this isn’t the first time that the design of the Galaxy S8 Active has leaked. It recently passed through the FCC and along with the documents was a diagram of the phone showing the design from the back, which matches up with these images. While the pictures aren’t officially from Samsung, as they appear to have come from a user who has gotten their hands on an early test unit, the words Galaxy S8 Active are clearly visible on the back.

One of the images shows that the device comes with a 4,000mAh capacity battery. This looks like the about phone screen which would also show other useful details like the software version, but the top half of the image is covered up. The galaxy S8 Active supports USB Type C and has a 3.5mm audio port on the bottom just to the left of the charging port. Also on the bottom is the single speaker.

Just as depicted in previous leaks, the Galaxy S8 Active has the telltale signs of the device series when it comes to the design, like the bumper style frame that protects the corners as well as a more rugged material composite that’s used for the back of the phone instead of the glass that’s used on the Galaxy S8 and Galaxy S8+. The dual camera module remains the same as well, as does the rear-facing fingerprint sensor. The phone shown in the images below is Black, which could very well be the only color that Samsung and AT&T (the exclusive carrier of the device) end up offering. There’s still no confirmation on a release date for the phone yet nor is there any mention of how much AT&T will be charging for it, but if it’s already passed through the FCC and hands-on images are starting to leak, chances are a launch is not too far off. 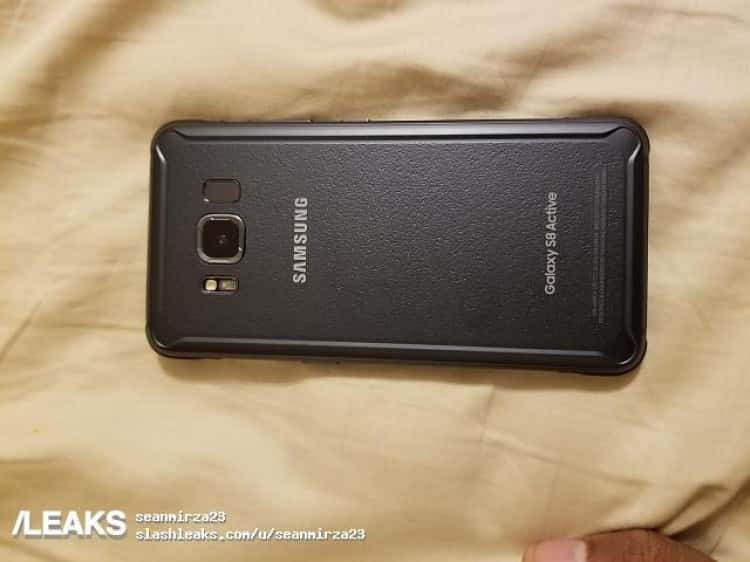