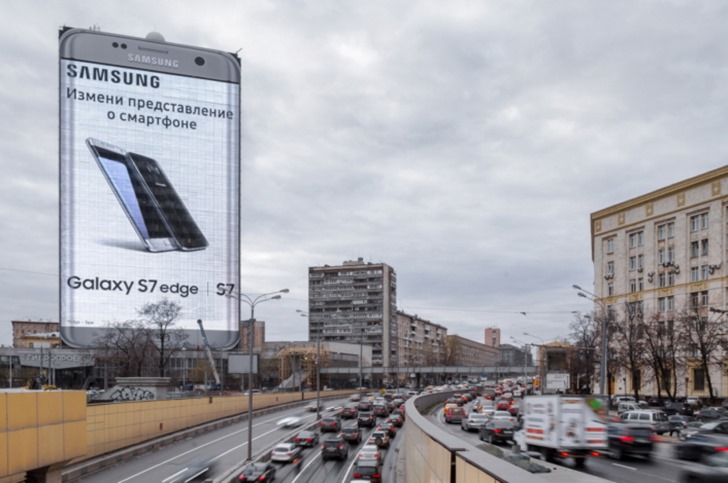 These days advertising seems to be looking for an edge, a unique and original approach that will engage potential customers and hold their attention better than the bombastic and simple ads of days gone by. And then again, sometimes it doesn't... sometimes subtly goes out the window, right before you apply a sign the size of a 25-story building to the other side of it. Such is the case with a Samsung advertisement in the Sokol district of Moscow, which uses a 262-foot tall building as a backdrop for the world's largest Galaxy S7 Edge.

The LED sign covers the entire side of the building, 80 meters tall by 40 meters wide, strategically placed near a highway that connects to a major airport. Some serious thought went into the design: the top and bottom portions of the sign aren't illuminated aside from the scale-appropriate Samsung logo, but the massive construction of LEDs can display video and still images on the "phone's" screen. Samsung claims that the sign can be seen as far away as 2.2 kilometers.

Samsung is a little light on the technical details of the sign. I'd love to know how the resolution of the LEDs in the sign compares to the actual resolution of the Galaxy S7 Edge, for example. But if you happen to be heading to Sheremetyevo Airport, be sure to check the sign out... as if you could miss it.