Skin and protect your Nexus 7 [Review] 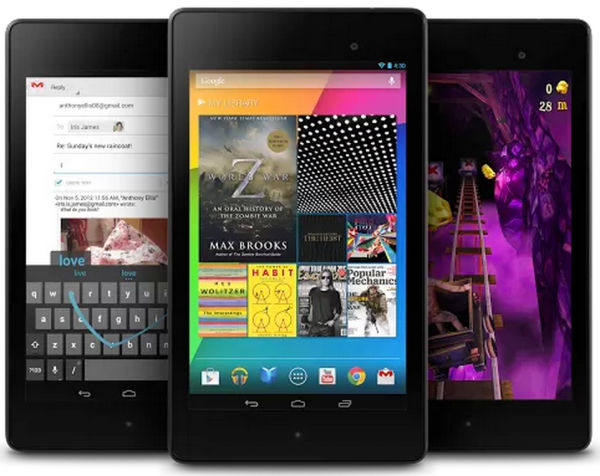 The Nexus 7 has gone down well with the team here at BetaNews (despite a few teething problems) and it's proving popular with a lot of other people as well. Part of the tablet's appeal is that it offers great value for money. But just because something is relatively cheap, it does not mean that it should not be looked after.

Whatever phone or tablet you have, there are countless protective skins to choose from and also various ways in which to stamp your mark on your mobile device. With a couple of Nexus 7's (Nexi?) to take care of, I thought I'd take a look at some of the options that are available. The official sleeve has been available for a while and the official case has been unveiled. At $50 it's worth seeing what else is out there as well. 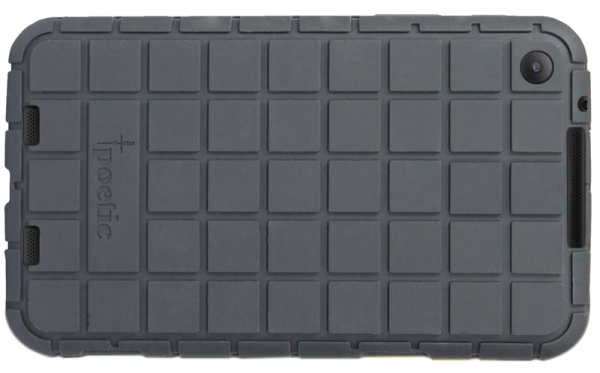 The GraphGrip is available in six colors in total, including a fairly unpleasant pick. I opted to look at the rather more stylish, and Goth-friendly, black. This is a simple silicon case that envelopes your Nexus and is robust enough to offer protection against bumps and drops. The screen is left exposed but the front ridge is big enough to largely avoid scratches should the tablet land facedown.

All of the ports are free accessible and the GraphGrip feels great in the hand. It does not add too much weight or bulk, but being silicon does mean that it has a grippy, rubbery feel to it that make slipping in an out of a bag or pocket a little awkward. 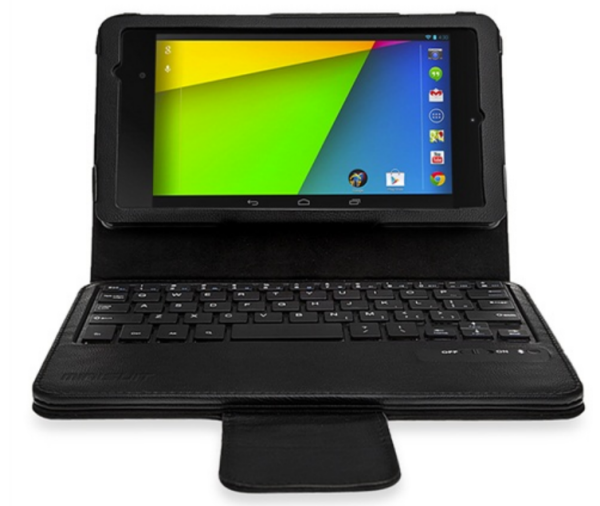 When looking at this particular case, my first experience was not great. For some reason the wake/sleep function was not working -- I tried it with two Nexus 7s, both of which worked just fine with other cases -- but the replacement functioned as it should.

Once up and running with the case, it feels like taking a step back in time. The fat leather case is reminiscent of 1980s business organizers -- it's good-retro and bad-retro at the same time. And another thing… it's big. Your Nexus just about triples in thickness, and the other dimensions are rather extended as well.

At least part of the reason for the extra bulk is the inclusion of a Bluetooth keyboard. This is not unpleasant to use, but it's not the best keyboard in the word by any stretch of the imagination. The keyboard itself sits on a separate leather base which can be removed from the case if required, but is held in place with magnets when it is in position.

There's a pop-out stand on the back to prop up your tablet for a decent viewing angle, but there's no room for adjustment. The Nexus can be tricky to use in the case as the leather hold area has a tendency to get in the way a little, making it hard to use the very edge of the touchscreen. All that leather simultaneously gives the case a quality feel whilst making you feel a little like a "stereotypical 1980s businessman". It does the job fairly well though -- function wins over style here. 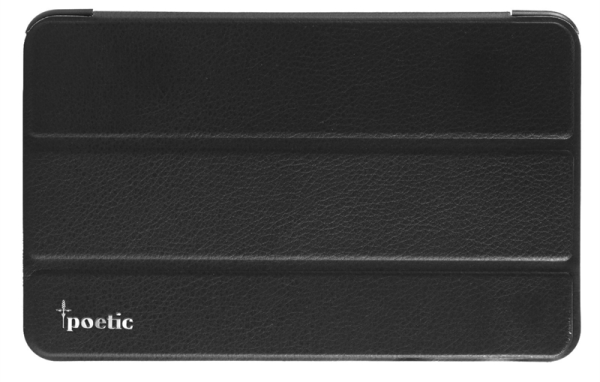 This is actually the case I have ended up using the most, despite the fact that it is probably the cheapest looking of the bunch. As the name would suggest, what the case has in its favor is its svelteness -- it adds just a few millimeters to the thickness of the tablet.

This is a magnet case which wakes and sleeps the Nexus inside as it is opened and closed. There are three magnets that snap the cover into place, but these do not run down the full length of the open edge, just the bottom half. You might think that this is a slight oversight, but in fact it make the case easier to open. The top right edge has just enough movement to it to make it easy to flip open with a finger.

The portion of the case that the tablet fits into is pleasingly sturdy. This hard section feel robust and grabs onto the Nexus with reassuring firmness.

The cover doubles as a stand so your Nexus can be propped up for watching videos or typing. But what lets the case down is the material. While it is entirely functional, it looks and feels very cheap. It put me in mind of old plastic coated notebooks from the 1980s -- or maybe even 1970s! Luxury is certainly not the word. 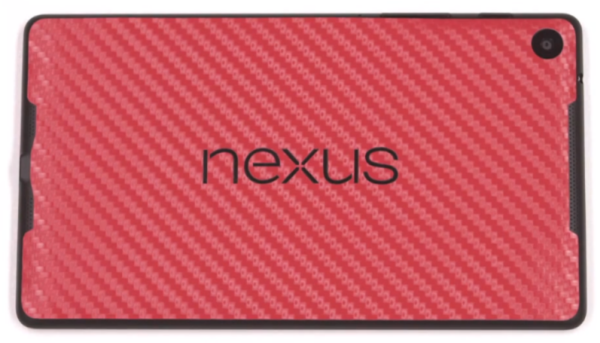 If you're more interested in changing the look of your tablet that keeping it protected, a skin may be what you're looking for. Dbrand has a series of colored, metal-effect, wood-effect and carbon fiber skins to choose from. There are versions available for numerous phones and tablets and each is precision cut with apertures for earpieces, speakers, cameras etc

With 15 different designs to choose from, you should be able to find something you like, but be warned: getting the skins installed is not a ten second job. The skins are described as having "the most precise fit on the market". This means that you have to take great care to line everything up correct before sticking the skin in place -- there's even a video to guide you through the process!

Once the adhesive has made contact, the skin is secure in place by heating with a hairdryer. This is a little disconcerting and another time you'll need to take care with these skins -- no one wants to melt their tablet!

The skins do offer a little protection, but only really to the front and back -- the sides do not get a look in. The screen is very slightly protected due to the thickness of the skin, so you could place your Nexus facedown on a flat surface without risk of scratching. Overall, the look is pretty good, but installation is fiddly, and protection levels are low. 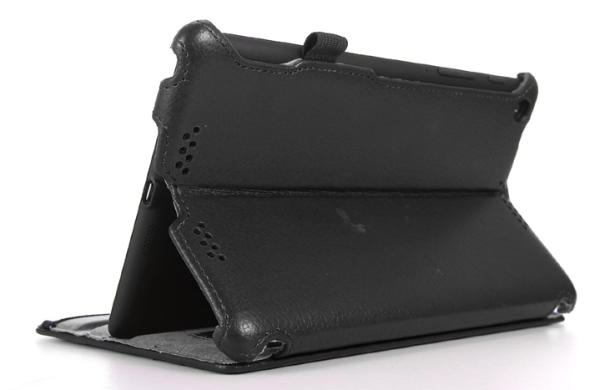 This is another relatively slim case which again offers sleep/wake support. This time, however, the cover is held in place with a clip rather than magnet -- it feels solid, but it's also slightly annoying and it means it's not possible to flick the case open quite so quickly and easily.

Why the name? Open the cover all the way and there's a strap you can slip you hand through to help avoid dropping your tablet. The case itself has a cotton fibre exterior and brushed cotton finish on the inside. Oh, and there's a pen holder too, weirdly. Maybe it's for a stylus, but the Nexus 7 doesn’t come with one.

The StapBack's nifty secret extra is the way it doubles up as a stand. The portion of the case that the Nexus clips into fold in half. This allows the tablet's left hand edge (of the bottom as it will become in landscape mode) to rest in one of two ridges for the preferred viewing angle. There's no protractor to hand, but I'm estimating 45 and 60 degree angles.

Buttons and ports remains easily accessible, and while there are some parts of the Nexus left exposed, the case does provide protection all the ways round including at the all-important corners.

Of these five, I have the Poetic SlimLine and StrapBack in use at the moment. I'm not completely decided which I'll end up sticking with -- and there are plenty more to look at! -- but these two will do for now.

Are there any cases or skins you have been particularly impressed with?