Following the Huawei P10, Huawei P10 Plus and the Huawei Mate 9 flash storage controversy, it seems like some Samsung Galaxy S8 handsets are coming with inferior flash storage as well. This was discovered by an XDA member who owns the Exynos 8895-powered Galaxy S8 (SM-G950FD). Now, his smartphone is using a UFS 2.1 flash storage, though he managed to discover that some other variants of the phone ship with UFS 2.0, which is inferior to UFS 2.0, read on.

The aforementioned XDA member asked other Galaxy S8 and Galaxy S8 Plus owners to try and find out what type of flash storage are their units shipping with. Well, the results were all over the place, as it was discovered that some Galaxy S8 handsets ship with UFS 2.0, while others come with UFS 2.1. Interestingly enough, all the Galaxy S8 Plus handsets seem to sport UFS 2.1, no matter what variants are we talking about. That being said, Samsung initially stated that all the Galaxy S8 smartphones ship with UFS 2.1, but the company has since removed that page. Now, we’ve included a screenshot of the info Samsung provided before the page was removed, and it said that the Galaxy S8 ships with uFS 2.1, and that the storage configuration will vary from one region to the other, and not the storage type, which means that all Galaxy S8 units should ship with UFS 2.1.

Now, truth be said, the difference between UFS 2.1 and UFS 2.0 isn’t as big as it is between UFS 2.1 and eMMC 5.1, which was the case with Huawei’s P10 and Mate 9 units. Still, this info must be a bit disturbing to some Galaxy S8 owners whose phones are running UFS 2.0, even though they’ll probably never be able to tell the difference in real life. Now, if you’d like to find out what flash storage is built into your Galaxy S8 unit, you can head to the Google Play Store and download the ‘AndroBench’ application. If your phone rocks UFS 2.0, you will get read speeds between 500MB/s and 600MB/s, while UFS2.1 will get you read speeds between 750MB/s and 800MB/s. It will be interesting to see whether Samsung will opt to comment on this situation or not, but there you have it. 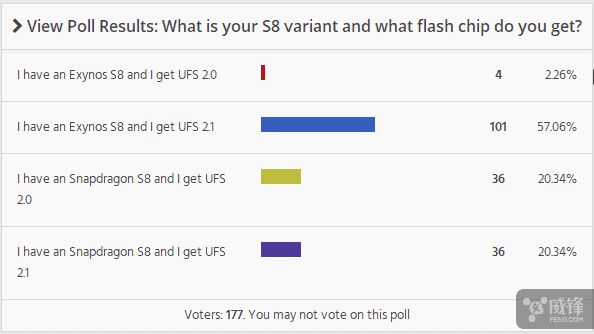 The post Some Galaxy S8 Units Ship With UFS 2.0, Instead Of UFS 2.1 appeared first on AndroidHeadlines.com |.