Certain Google Pixel units are unable to install the July Android Security Update that Google started rolling out on Wednesday, as numerous owners of the 5-inch flagship took to the company’s official product forums to complain about their smartphones failing the installation process. The Alphabet-owned company is distributing its latest set of security patches as an over-the-air (OTA) update, yet owners of some models are presented with a “Couldn’t update” message once they attempt to install the 61.1MB package. The error doesn’t clarify on the problem and only provides users with the option to “Try again,” which reportedly doesn’t do anything. According to recent reports, Google Pixel models from Google Fi, Rogers, and T-Mobile are the only ones affected, indicating that the issue is related to the OTA build NKG47M. Google Pixel units bought from Verizon Wireless and unlocked, international versions of the handset are all seemingly updating without any issues.

The Mountain View, California-based tech giant already said it’s aware of the problem and is working on a fix, though it’s currently unclear how long the company will take to distribute the patch. Google didn’t go into any details regarding the nature of the issue and what caused it and it remains to be seen whether the firm does so by the time it distributes a new software package. None of the Pixel XL units are affected by the phenomenon, with their 70.1MB OTA arriving and installing on all models without any hiccups. While some owners of the smaller Pixel-series smartphone are now still running the June security patch, the company assured them that there’s no reason to be nervous as no known exploits are currently in circulation and their devices are still safe as of this writing.

The latest OTA already hit the Nokia 6 in certain territories even before Google managed to push out the images for compatible Nexus and Pixel devices, which isn’t an everyday occurrence and signals that HMD Global Oy is seemingly serious about its promise of regular software updates for new Nokia devices. More details on a revised version of the problematic NKG47M image should follow shortly. 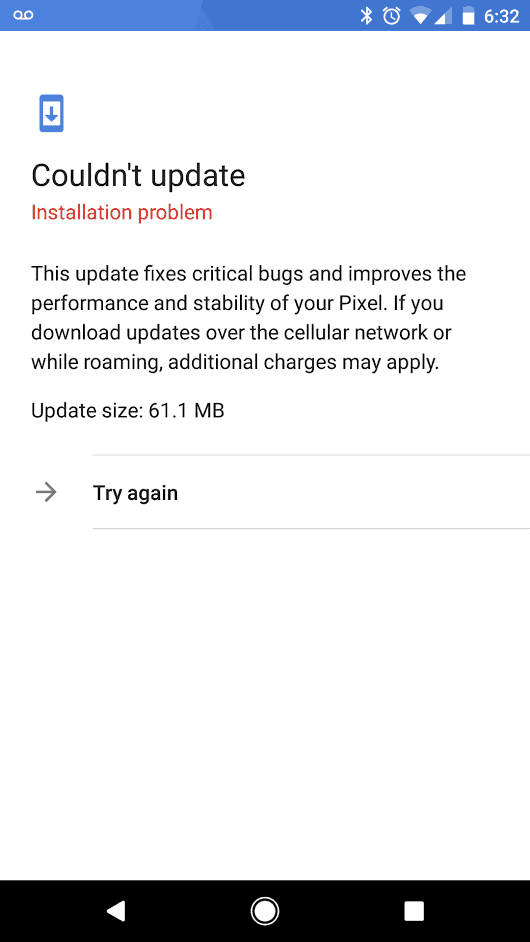