Sometimes a sociopath is the only hope for ensuring the emotional freedom of the world. eMOTION: Forced Pair by C. Ryan Bymaster 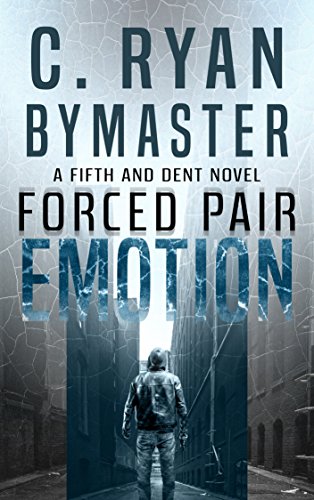 Marion Dent is a high-functioning sociopath, unafflicted by emotions, trained from a young age to become the perfect soldier to combat illegal emotional-tampering technology known as eTech. Relieved of his military duty, he has become a contractor for the highest bidder, his mental handicap making him the perfect weapon in a world where illegally controlling emotions means controlling economic power. Dent’s skills are put to the test when he’s contracted to steal a package—a young girl dubbed Fifth, who has a very unique talent which has the potential to render current eTech obsolete and usher in a new form of undetectable emotion-tampering.

Seemingly betrayed by the person who hired him, Dent flees with Fifth, where they find themselves in a tentative partnership, struggling not only to survive hitmen and assassins but also to understand each other. Dent races to figure out why he was betrayed as he comes to suspect the people behind Fifth’s secretive past may have ties to his own. For the first time in his life, Dent’s actions are clouded by emotions, and if he can figure out how and why Fifth makes him act irrationally, he may have a chance to save her from the same fate he suffered at a young age—being studied and manipulated into becoming an unwitting pawn as countries and corporations fight for economic dominion, with no remorse for those they harm or kill in order to obtain power.

A sociopath may just be the only hope for ensuring the emotional freedom of the world.

The post <p style="text-align:center;font-weight:bold;">Sometimes a sociopath is the only hope for ensuring the emotional freedom of the world. <em>eMOTION: Forced Pair</em> by C. Ryan Bymaster</p> appeared first on Kindle Fire on Kindle Nation Daily.