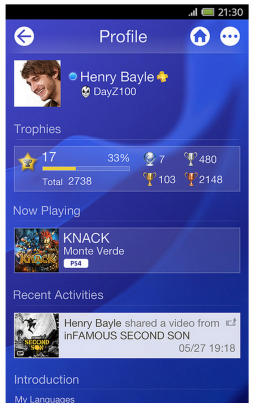 The "second screen experience" is a buzzword (buzz-phrase?) being tossed out a lot lately as everyone out there tries to figure out how they can offer deeper integration with their products/services and the device you carry with you everywhere you go. Of course next generation consoles are leaning heavily on this, but it still remains to be seen just how useful it's going to be in the future. This morning, Sony published a bunch of details on how the new PlayStation App is going to work.

It's hard to get excited, at least right now, as the base functionality is basically going to allow you to do things you'd typically just do on your console anyway. Specifically mentioned was being able to communicate with people on your friends list, compare trophies, browse the store, check out game replays, and view live streams.

Like most of these second screen experiences, more interesting functionality is promised in the future:


PlayStation App will also offer ‘second screen’ gameplay features on enabled titles. For example, during the TGS presentation Yoshida-san showed how the app interacts with THE PLAYROOM – he drew a picture of Knack on his smartphone’s touch screen and then pushed it into the PS4 game on his TV, allowing the game’s bot characters to play with the item he’d created.

“There are many big publishers creating their own apps for their games, like Watch_Dogs or Battlefield, and that’s great,” he added.

“But smaller developers can use PlayStation App to connect to PS4 and load an application, like drawing software for example, so that you don’t have to download and install a specific app on your smartphone. It’s open to all PS4 developers to use.”

I don't mean to sound like a downer on all this, I've just really yet to see a second screen experience that makes me go, "Alright, now this is awesome." Instead, especially in the case of all the Xbox SmartGlass implementations I saw, it seemed to be more of a solution in search of a problem. We'll see how that changes in the future. Certainly the potential is there, but, will it be realized as anything more than an afterthought in console game development?