'Space Qube' Review - These Are The Voyages Of The USS Toilet 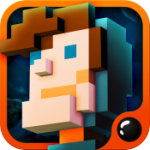 The App Store being what it is, one of the bigger challenges a game faces is simply being noticed. With almost every genre represented and then some, unless you're working with a well-known IP, you need to have some kind of gimmick or hook to stand out. Well, Space Qube [$0.99], a shoot 'em up from new faces Qubit and Playground Publishing, owns its gimmick proudly. The hook here is that you can build your own 3D ship, piece by piece, and take it into battle. This isn't the first game to allow this kind of custom design, but it's uncommon enough to give the game a bit of a unique feel. Unfortunately, there's something else that feels unusual about this game.

In Space Qube, you'll play through level after level, shooting down waves of enemies in a behind-the-ship shooter that looks a little like StarFox but plays more like Galaga, since you can really only move left and right and shoot ahead of you. At the end of each level, you'll face one of four different types of bosses. Beat the boss, and you'll zoom to the next stage. As you progress, the stages of course get more and more difficult, and while the types of bosses repeat, they're always a little stronger (and differently colored) the next time you see them. 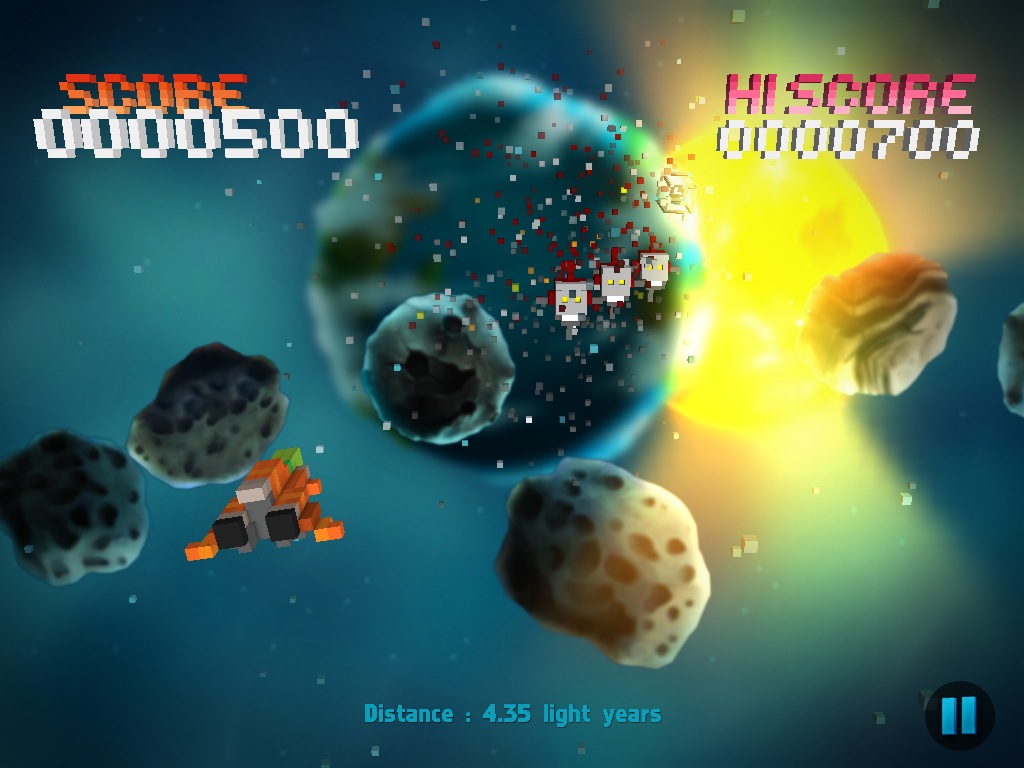 Of course, as mentioned in the introduction, the main draw here is the ability to create your own ship. Every object in this game is created with voxels, which are basically 3D pixels. The ship editor in this game is excellent, allowing you enough space, layers, and colors to create pretty much any kind of ship you want. You want to be an interstellar Batman dispensing cosmic justice from the Green Lantern ring you ripped off Hal's dead body? Go for it. Maybe you want the Vic Viper to ride again? Or perhaps you simply want to wreak havok with a giant, flying toilet. It's all up to you. The editor makes it easy to create anything you want, and as an added bonus, if you're one of the five richest kings of Canada and therefore own a 3D printer, you can print out your ship. If you're not the designing sort, the game does provide a few default ships for you to choose from, and by playing the game, you'll eventually unlock a whole bunch more. 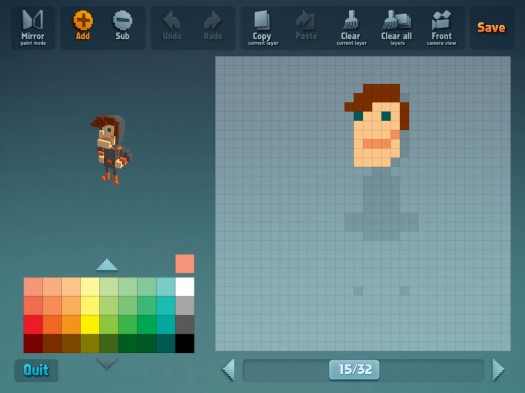 Having everything made from voxels gives the game a pretty unique look. It reminded me a lot of the game 3D Dot Game Heroes on the Playstation 3, kind of high-tech retro look. The backgrounds are basically multi-layer still images with a blur effect applied that slowly zoom in as you progress through the stage. The blurriness of the background actually helps the sharp voxels of the enemies and their shots stand out better, so while it isn't very pretty, from a gameplay point of view, it works. The music and sound effects also cash in on the retro buck, with strong melodic chiptunes and 8-bit sound effects.

As you play through the stages, you'll find a variety of power-ups you can pick up and use temporarily. In terms of offense, you'll find a heavy duty laser and missile power-ups. On the defensive side, you can pick up a shield to protect you from damage and hearts to replenish your ship's health meter. Aside from these, you'll also find two types of magnets, used to suck in the game's currency, a bullet-time power-up that slows down everything except your shots, and a booster that instantly sends you a large part of the way through the stage. The power-ups show up pretty regularly, and provide a very useful leg up, particularly against the bosses.

You'll come across quite a large assortment of enemies, most of which leave behind orange blocks called qubes. Qubes are the currency of this game, allowing you to power-up each of your ships individually with items like a qube magnet or doubler, a more powerful default laser, and stronger power-up effects. Qubes are also used, in an ever-increasing amount, to continue should your ship take too many hits. Perhaps most importantly, qubes are used to build your own ships in the editor. It's quite trivial to earn more than enough qubes to kit out your ship completely just by playing, but the game will also give you a daily login bonus as well. If that's still somehow not enough, you can buy more qubes via IAP. 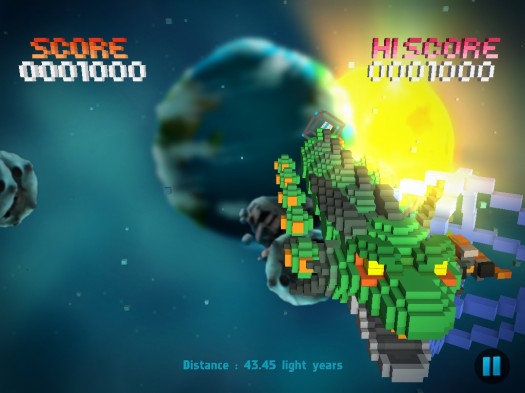 The qubes end up being the game's undoing in some ways, however. Some of the power-ups you can buy, such as the upgrades to the default laser, make you incredibly strong. Far worse, however, is the continue system. Even as the cost of continuing ticks up, once you have the doubler and the magnets, you'll almost certainly earn more qubes than it costs to continue. Continuing does not reset your score, either, so even though the game has Game Center support for leaderboards, it feels like what they're really measuring is your capacity to continue playing without getting bored.

Space Qube is just too easy, especially in the beginning, but each time you play, you're going to have to make your way through those early stages yet again, which will earn you a bunch of qubes, which will give you a huge buffer of continues, which can be used without any real penalty. It's really too bad, because the game plays well enough. Both touch and tilt controls work very well, the power-ups are fun, the enemies are varied, and the bosses are really cool. The game's balance is just tilted far too strongly in favor of the player, which results in a game that becomes a little mind-numbing in the long run.

It's pretty clear Space Qube was designed as a F2P game. The currency doubler, the daily bonuses, the magnets, and much more point to this game's past intentions. While I'm personally happy they went for a premium, everything up-front package in the end, the game has clear balance issues as a result of this change. I think the game could be tweaked into something more interesting to play in the long run, and I certainly hope the developers give it a shot. There's a good core here, but the devil is in the details, and right now, the details bring Space Qube down hard.

It's sad to toss another game with a great editor function on the pile, but this is yet another one of those where it's quite a lot more fun to mess around in the editor and take a quick spin than it is to play the actual game. I think kids in particular could have a really great time with this game, so long as they have the patience to create the designs that are in their imaginations. The lower difficulty probably won't matter one lick to them, either. For any reasonably skilled player, however, I feel the shoot 'em up action itself is too easy, and the scoring system is completely broken by allowing you to keep your score off a continue. If you're a fan of this genre, you could certainly do worse on the App Store, but you could do quite a lot better, too, so I'd really only recommend checking Space Qube out if you want to play around with the excellent ship editor.