One of the best parts of attending E3 2018 in person is actually getting to play the games after seeing a new trailer during one of the big keynotes from the likes of Sony, Microsoft and Nintendo. It’s honestly the only reason some of us endure the heat of the scorching Los Angeles sun and hours upon hours of lines.

It was disappointing, then, when Sony only offered demos of one single game at the end of its very strange hour-and-a-half keynote on Monday, June 11.

There was an entire venue to fill for goodness sake and yet most of it remained utterly unoccupied. Well, almost.

In the middle of a crowded courtyard, stood Spider-Man - the new game from Insomniac Games that is shaping up to be the ultimate comic panel-to-TV panel interpretation of the Wall Crawler the world has yet to see. It has the traversal mechanics of Spider-Man 2 on GameCube and the combat of games like Batman: Arkham City and Middle-Earth: Shadow of Mordor.

It has those, in addition to exclusively Spider-Man aspects - like the ability to change suits to alter your powers, use your webs to grab items and sling them in combat and the ability to run up the sides of buildings.

Said simply, if there’s ever been a Spider-Man game to get your underoos in a bunch about, it’s this. 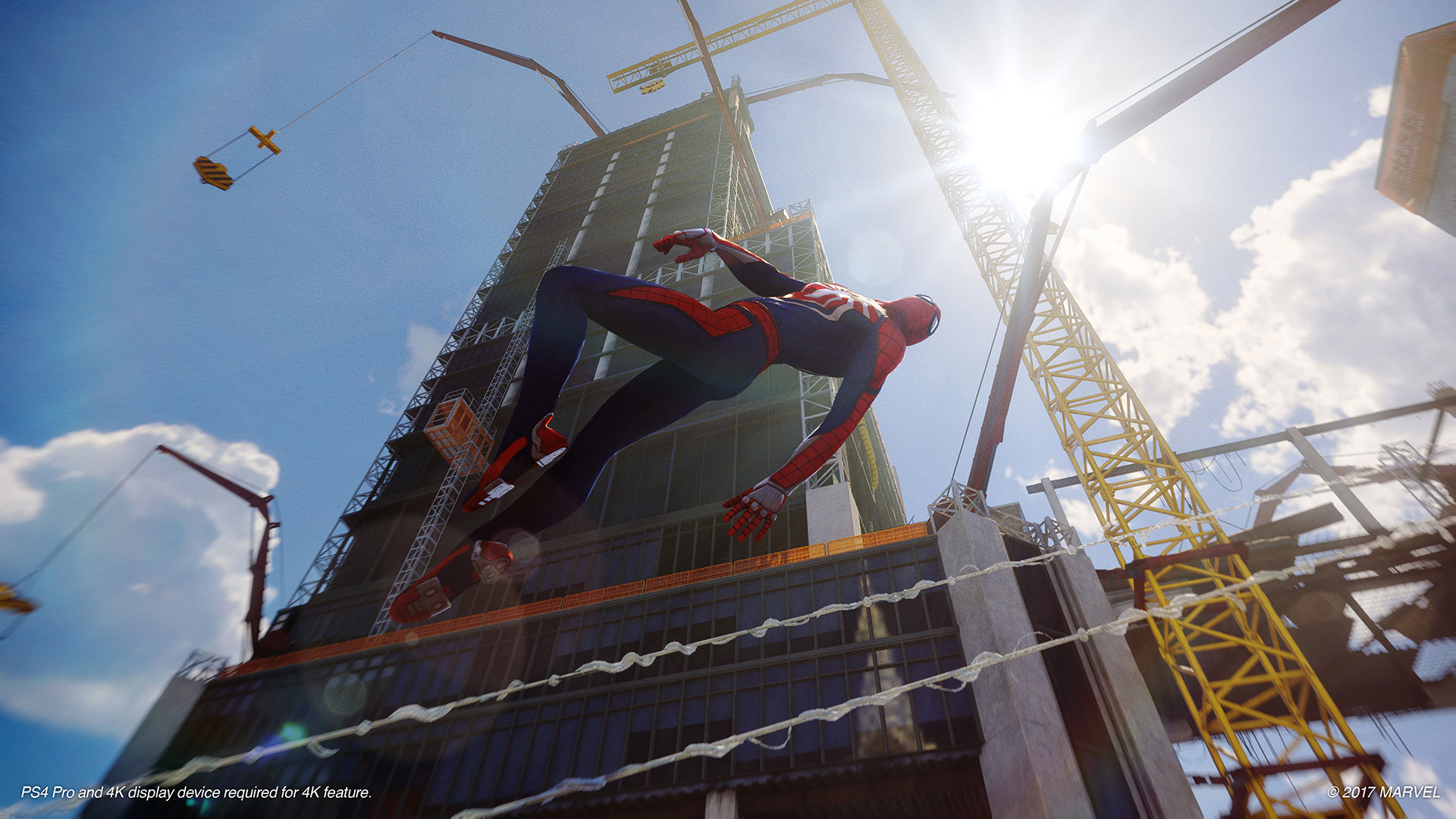 While the quippy wall-crawler is the unequivocal star of the show, you can think of New York City as the game’s second most important character. I say that because not only is New York a city with a distinct identity - from its towering skyscrapers and relentless traffic jams - but it’s the glue that holds the Spider-Man world together.

That said, Spider-Man is a lot like the open-world games you’ve played in the past: You’ll hustle from Point A to Point B on the map to beat this villain or that. But in between those set missions are ambient quests that pop up sporadically via the police radio. You might hear about a robbery in progress or a police shootout and you can decide whether to step in and lend a gloved hand ... or simply let law enforcement handle it on their own.

The map shown to us during the demo of Spider-Man at E3 was massive - easily just as big as the one on PS2 or GameCube and packed to the brim with activities. Finding your next adventure was as easy as triggering your Spider Sense, and based on the number of quests we saw, there are more than enough events to keep even a vigilant vigilante occupied for a while. 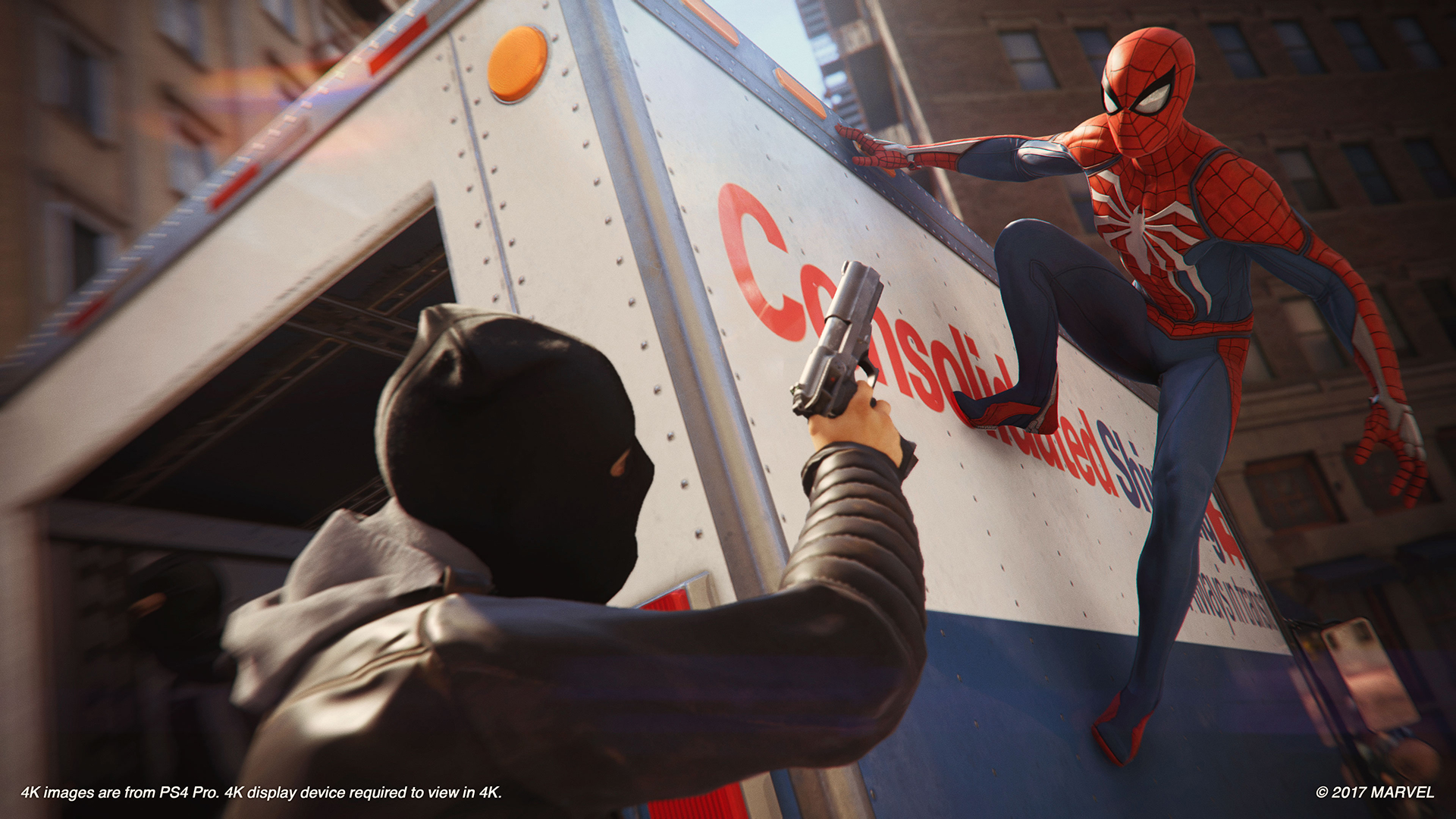 Sticking it to the cab company

But what use is a big open-world city if it’s not fun to explore? Thankfully, Insomniac Games has faithfully replicated the agility of Spider-Man on the silver screen and the result is one that is, dare I say, even more enjoyable than Spider-Man 2.

Controlling Spidey works a lot like controlling Batman in any of the Arkham games. You’ll be able to use R2 to shoot a web offscreen to the closest tall building, and that will act as a tether to propel you forward. Jump at the height of the forward swing and you’ll gain momentum. If you’re more concerned in gaining speed, you can either use X to shoot a web at the nearest object to jet forward or press R2 and L2 together to perch on an object.

Where Batman and Spider-Man differ is where the two actually collide with a building. In Batman, you’d bounce off the building and either fall to your inevitable demise or pull out your grappling hook to get back in the air. Spider-Man is a bit different. Because Spidey has adhesive feet and hands, he can either run up or along the sides of buildings - meaning that it’s rare for you to ever lose your momentum.

When these systems come together, the results are cinematic and gameplay gold. Within minutes I was re-creating the scene from Tobey Maguire’s run of the character where he swung above busy New York streets just feet away from the taxis and buses. For some, these are just systems in a game to help you get around but for others, these mechanics are what Spider-Man is all about. 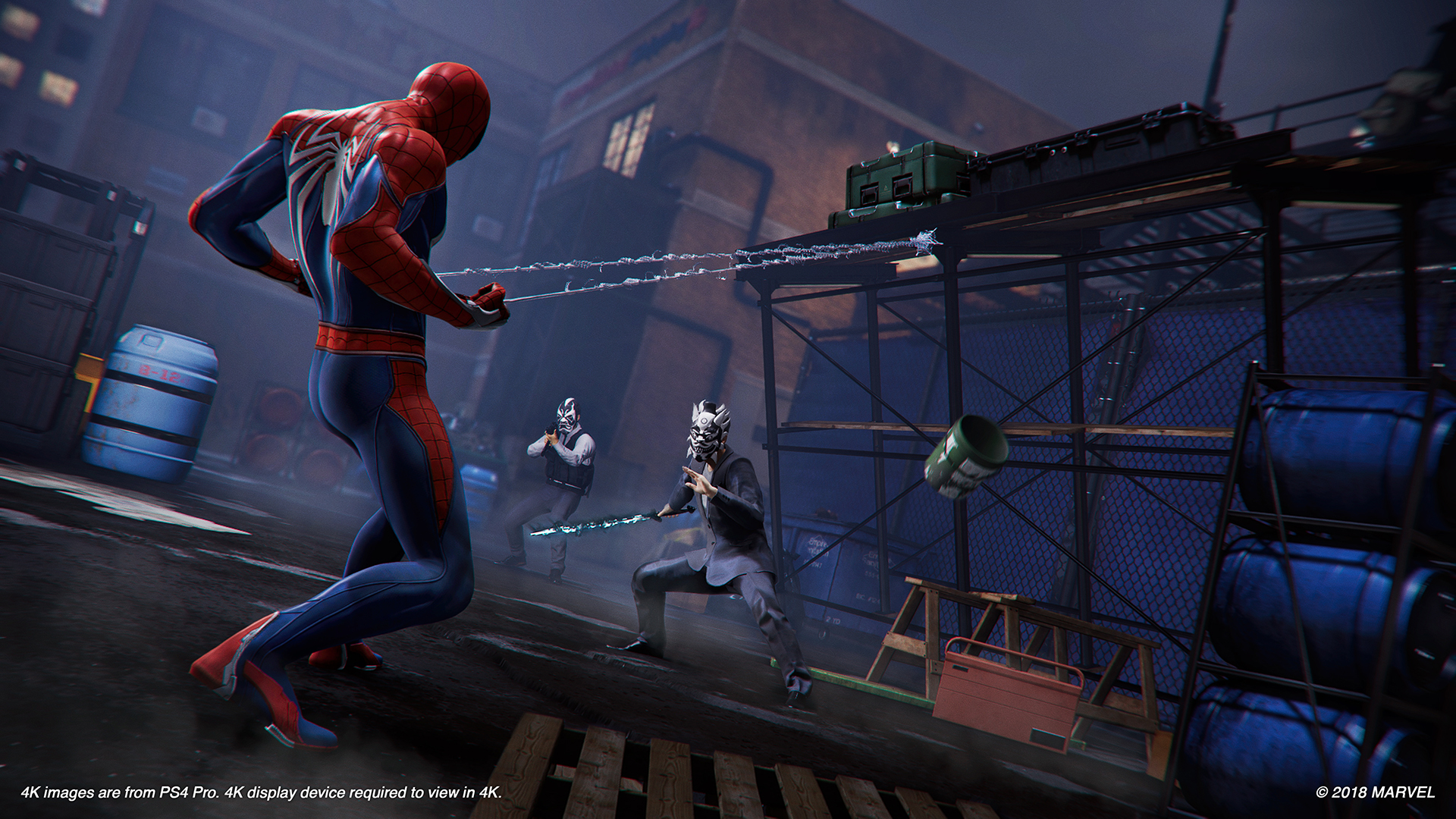 Your Spider Sense is tingling

The last area of importance - at least as far as our demo was concerned - was combat. While Arkham’s Dark Knight might land punches with authority, the wall-crawler hits faster with less power behind them. While that might sound like Insomniac’s spider doesn’t have any teeth, nothing could be further from the truth.

What Spidey makes up for in raw physical strength, he makes up for with agility and intuitiveness. To that end, using the environment to your advantage is absolutely crucial if you want to beat down groups of foes faster than you can say “Uncle Ben is dead!”

If you’re ever in a spot where there’s nothing around to interact with, though, Peter Parker has a whole arsenal of gadgets he can use to string up foes or incapacitate them for a short period of time. In the demo, two were unlocked - web mines and the web grenades - and we needed both to take down a particularly rowdy gang of mercenaries at one of Wilson Fisk’s many strongholds.

It all led up to the finale - a showdown our first boss, Shocker.

The fight happens in a empty study replete with a grand chandelier. Unfortunately, as close quarters fighting isn’t Spidey’s strong suit, there’s a bit of a spike in difficulty as you need to dodge like never before using your web-slinging to stick close to the ceiling and get around Shocker until he tires himself out. Once Shocker’s tired, you can rush him to lay a beatdown before he recovers. The fight finishes in a dramatic way that I won’t ruin for you here and when it does the demo comes to a close.

Walking away from the demo and hanging up our underoos it’s easy to feel like the fate of the web-slinger is in good hands … er, gloves.

Speaking of digits, can’t wait to get your mitts on a copy of the game? Spider-Man comes out on September 7 2018.