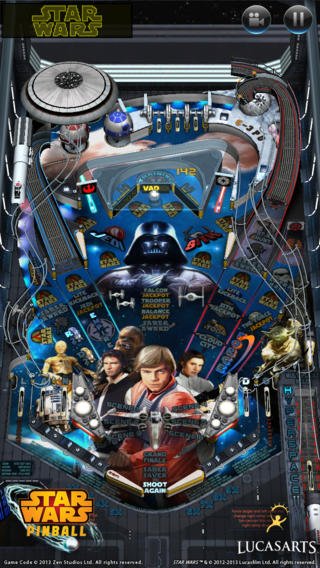 The first of the four tables is dedicated to Han Solo and his faithful companion, Chewbacca. It’s full to the brim with some of Han’s “most memorable lines and gadgets,” according to ZEN Studios, and as such this is a table that fans of the character don’t want to miss.

The second table, Star Wars Pinball: Droids, is dedicated to C–3PO and R2-D2, and a third table allows gamers to relive their favorite moments from “Star Wars Episode IV: A New Hope” – the first title in the original trilogy. Finally, a fourth table called “Masters of the Universe” is described by ZEN Studios as “a special tribute to the highest powers in the universe both good and evil.”

Each one of the new tables can be unlocked for an in-app purchase, and prices on existing tables have also been discounted in early celebration of the upcoming “Star Wars” day, May 4 (“May the Fourth”). As the developer explains in the app’s release notes:

In celebration of Star Wars Day, get 50% off select tables and download the Star Wars: Episode V The Empire Strikes Back table for FREE for a limited time. May the Fourth be with you!

As mentioned, Star Wars Pinball can be downloaded now free of charge on the App Store, and the four new tables outlined above are indeed available to access.

Check out the updated app, or see: This iPhone 6 Mockup Shows A Bigger, 4.7-Inch Handset Based On Real Designs, Could Logitech’s Upcoming Case [+] Be The Best iPhone Case Out There?, and Amanita Design’s Botanicula For Mac Blossoms Into A Brand New iOS App.

Star Wars Pinball Gets Updated To Add 4 Brand New Tables is a story by AppAdvice.com
AppAdvice - iPhone, iPad, iPod, App Reviews + News
Get the latest tips & apps for your Smartphone