Sticker suggestions in Google Messages are almost ready to go

Stickers are the messaging trend right now, with Facebook, Telegram, Google, and other companies adding them to any platform they can think of, not even stopping short of mashing up emoji. To make them even more ubiquitous and easier to use, Google is testing some changes in Messages and Gboard, adding contextual sticker recommendations to the former and sticker pack suggestions to the latter. 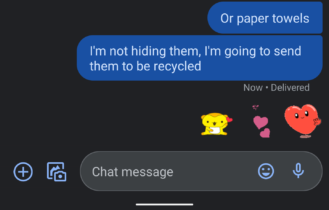 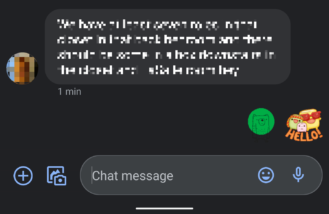 A tipster using the leaked dogfood built of Messages version 6.2.031 (an internal, pre-release version only meant for Googlers) reports getting individual sticker suggestions on top of the compose box, like the "Attach recent photos" prompt. These suggestions might not be part of the dogfood build itself, as app sleuth Jane Manchun Wong already managed to activate the corresponding toggle in Messages' settings in an earlier version, as pictured below. Some of us at Android Police also already have access to the toggle without tinkering with the app, but we've yet to see sticker suggestions — since we barely use SMS or RCS, we might just not have come across them, though.

It's also possible that the dogfood version is needed to initially activate the functionality, and the toggle is just a placeholder in earlier releases. Either way, it probably won't take too long to roll out widely, with all of these measures in place.

Meanwhile, Gboard has been suggesting individual stickers and GIFs based on emoji since last year, but the latest test has the keyboard highlighting whole sticker packs. If you're in on the server-side test, you'll find them in the stickers section of Gboard right in front of the packs you've added to your keyboard. A little star icon sets them apart from others. When you tap the suggestion, you'll see a card with the selection's name and two buttons: "Pass" and "Add." Passing will push the recommended stickers out of view, and adding will give them a place among your existing collection. The suggestions seem to be limited to one sticker pack at a time, and it's still unclear when packs qualify for the pole position, but the feature might very well be intended to showcase new creations.

You can grab both the latest release of Gboard and the dogfood build of Messages from APK Mirror, though as mentioned, server-side switches seem to be involved — your mileage may vary.