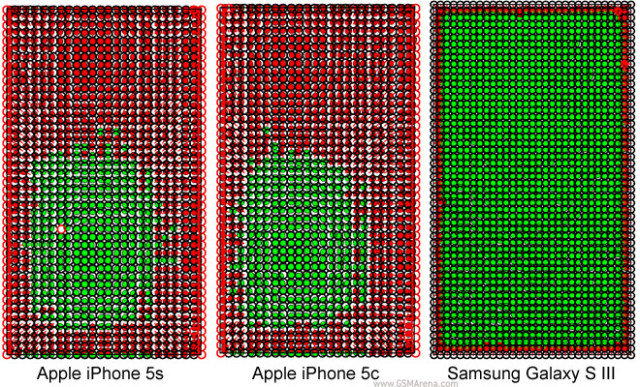 So iPhone owners can claim that their touchscreens are more responsive than those of Android users, but are they as accurate? That’s the question the folks at OptoFidelity wanted to answer, so they built a machine to do the heavy lifting and set about plotting their data. The results were quite surprising.

Using a precision-calibrated robot arm and finger to continuously touch smartphone displays at specific coordinates, the intended result was than compared to the actual data points registered by the operating system. The verdict? The display used in the iPhone 5S and iPhone 5C (and iPhone 5, by extension) is far less accurate than that of the Samsung Galaxy S3.

While the Galaxy S3 was accurate uniformly across its display (the very outside edges being the one exception), the iPhone’s display registered touch input in a far less precise manner. The most accurate portion of the screen happened to correspond with where the phone’s virtual keyboard rests, but even then accuracy was spotty.

In the end, overall accuracy comes as slightly more important how quickly a phone can register touch input, especially when it’s mostly a matter of milliseconds. Based on how difficult the inaccuracy of the iPhone’s display makes typing on the device, it’s wonder we have seen so many autocorrect memes pop up.