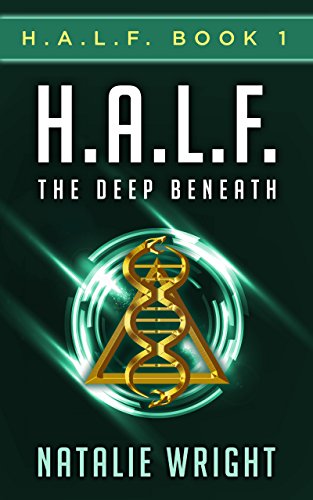 – Learn More
Text-to-Speech and Lending: Enabled
Don’t have a Kindle? Get yours here.
Or check out the Audible.com version of H.A.L.F.: The Deep Beneath
in its Audible Audio Edition, Unabridged!
Here’s the set-up:
WINNER Best Book Description Award, 2015 Indie ReCon
RUNNER UP 2015 Beach Book Awards Festival, Young Adult Category

H.A.L.F. 9 has taken his first breath of desert air and his first steps in the human world. Created to be a weapon, he proved too powerful for his makers, hidden from humans and sedated. But H.A.L.F. 9 has escaped the underground lab he called home, and the sedation has worn off. He has never been more alive. More powerful. Or more deadly.

Erika Holt longs to ride her motorcycle east until pavement gives way to shore. She bides her time until graduation when she’ll escape the trailer she shares with her alcoholic mother and memories of her dead father. But a typical night in the desert with friends thrusts Erika into a situation more dangerous than she ever imagined.

Circumstances push the two together, and each must make a fateful choice. Will Erika help H.A.L.F. 9 despite her “don’t get involved” rule? And will H.A.L.F. 9 let Erika live even though he was trained to kill?

The two may need to forget their rules and training if either is to survive the dangers of the deep beneath them.

“Once I began, I couldn’t put it down … I anxiously await book 2!” ~Michelle Williams, Amazon Reviewer

“This novel grabs you at the beginning and it doesn’t let go until the end. The plot is well done and seems eerily possible. I can’t wait for book 2!” ~Stephanie S, Amazon Reviewer