Sunset Overdrive is out today, marking the end of a journey for Insomniac Games. The Ratchet & Clank creators ventured into uncharted waters with this Xbox One exclusive, taking a daring leap into manic third-person action that mixes in the craziness of an extreme sports title. It has been received largely well, including by the Shacknews staff, giving the studio plenty to celebrate. Hours before the game's official release, Shacknews caught up to Insomniac creative director Marcus Smith to talk about Sunset Overdrive.

"The whole thing was, Drew Murray (the game director) and I, were talking about what kind of game we would make if somebody was foolish enough to give us a bunch of money," Smith told Shacknews. "We were thinking of something that was straight 'zombie apocalypse,' open-world sort of thing, and at one point, there was a lot of that happening in the world. So we started thinking about moments in those movies like Will Smith hitting golf balls off the aircraft carrier, Charlton Heston driving around, or Jim, the character from 28 Days Later, in the empty streets of London, thinking, 'That actually looks awesome! I'd love to do that!' So instead of the end times, it was more like a new beginning. Now somebody who doesn't have all the social norms and laws to prevent them from doing whatever they want. That was kind of the first thing that sent us in that direction. From there, it was kind of like, 'What would Iggy Pop do if he was the last guy on Earth?' It'd probably be fantastic. You'd probably die really quick, but in a spectacular way." 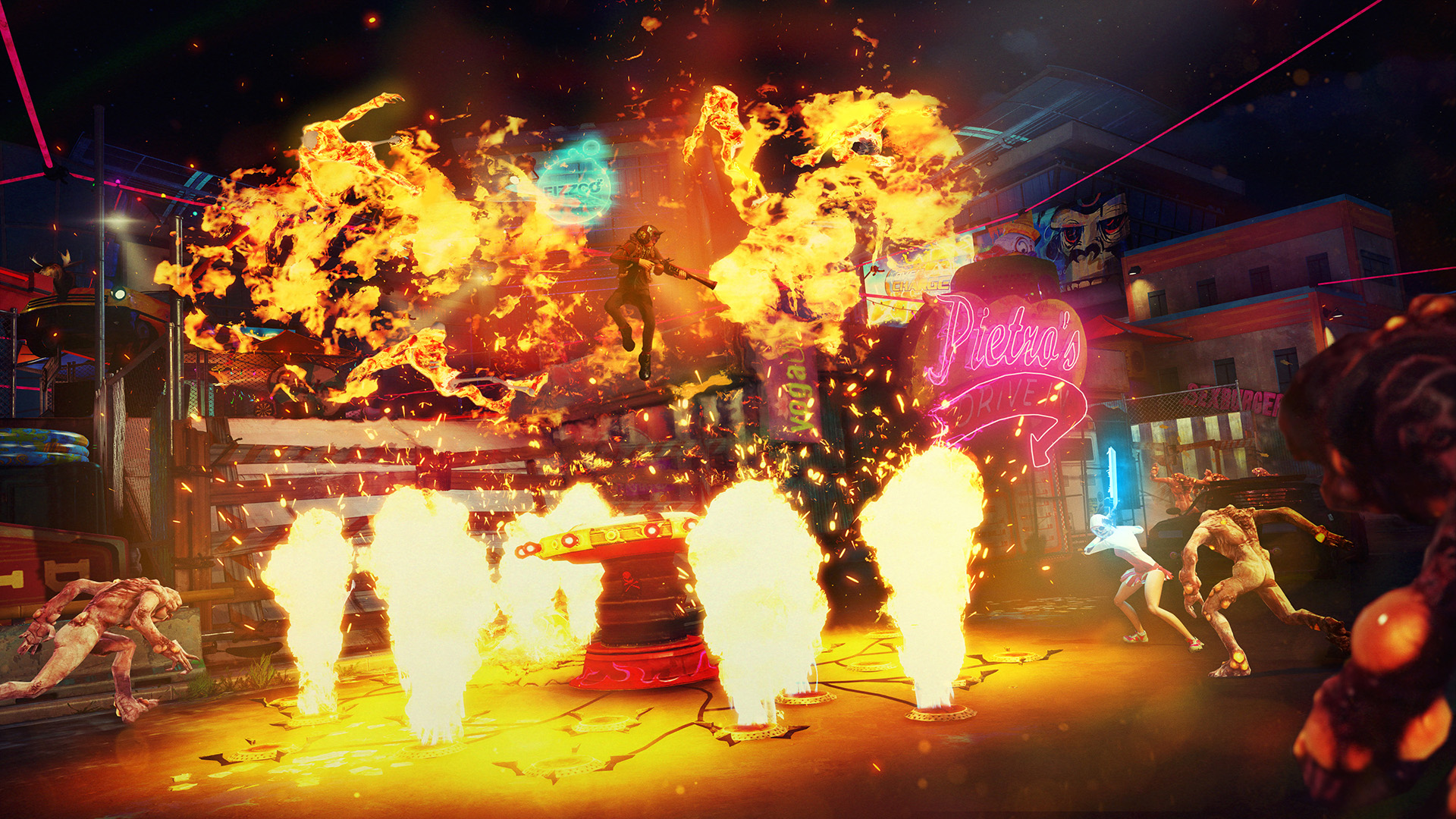 Sunset Overdrive also represents a bit of a new direction for Insomniac, in the sense that players are not taking the role of a specific character. Rather, they are creating their own character, a fact that's played up heavily in the game's ad campaign. I asked Smith what the reasoning was for this direction, as opposed to having a central character in the vein of the studio's Ratchet & Clank games.

"There's sort of the creative decision and… I don't want to say technical, but almost 'gameplay' decision," Smith answered. "We knew we wanted to have a multiplayer experience that was seamless with the single-player experience, so we didn't want to have the same character multiple times. We didn't want everybody to be Master Chief, or Nathan Drake, or Marcus Fenix, or whatever. That was sort of the gameplay reason, but then the other reason is we want people to play as they want to be. The thing about 'be who you want to be' in the end times, one of the things we said is, 'Would it be like Burning Man, where everybody is suddenly loosed to do whatever they want?' And if that's the case, we should really play that up and make sure we can support all these body types and male or female characters."

For Insomniac, Sunset Overdrive represented the developer's first chance to work with the relatively new Xbox One hardware. It was a challenge that they relished and one that they did not jump into blindly.

"The big thing was, in Fuse, the last game Insominac had done, it was a cross-platform game, so we already had experience developing for Xbox 360 and that made it a lot easier," Smith explained. "Because of our relationship with Xbox, we were aware of what was coming down the line and they prepared us pretty well."

Smith also acknowledged Insomniac's previous experience working with new hardware. After all, this is the team behind Resistance, a PlayStation 3 launch title. They had plenty of lessons from that project to bring along with them to this new endeavor.

"I think the main thing is being pragmatic," Smith said. "I think the tendency with new hardware is to say, 'Oh, we can do anything! That's a pretty naive way to look at it. The fact of the matter is, you're still bound by the realities of the hardware and it just means you need to be creative about how you solve problems. I know earlier on in Resistance, we were thinking we would just have tens of thousands of AI on-screen doing physics maneuvers and the reality is, that's not the world we live in where you can support something like that."

As Smith continued to speak about practicality in regards to hardware, it brought up an interesting point. Over the weekend, Chatty poster Madwacker wondered about Sunset Overdrive's 900p output, wondering why Insomniac would follow suit with many other developers and downgrade their game's resolution? I pitched this question to Smith, who pointed out the studio's desire for increased on-screen effects, particularly in multiplayer.

"We're a company that loves crazy weapons and we have a lot of crazy weapons," Smith clarified. "Part and parcel in that is having a lot of interesting weapons, like the Teddie Bear Launcher, with its teddy bear head effects and everything. And plus, we have Chaos Squad with eight players able to shoot all their weapons. So what happened when we started going to 1080p was we'd start losing some of those effects, so the fidelity of what my weapon was doing in the world would get lost, because we'd have to clip out those effects just to stay in frame. For 900 vs. 1080, we'd look at it and discuss the trade-offs, and we ultimately decided that we wanted more effects on-screen to play up these weapons and let the artists go crazy. I think it still looks amazing and it fits the game better."

There's plenty of insane weaponry in Sunset Overdrive, which has proven to be a hallmark of Insomniac's library. After briefly discussing some of the process in creating the game's weapons (which Smith notes partly consists of big drawings of a teddy bear, a plus sign, and a bundle of dynamite), there was one more question I wanted to pitch to the game's creative director.

"I guess the main thing was, [game writer] John [Paquette], [game director] Drew Murray, and I were saying, every post-apocalyptic storyline always starts with something pretty serious," Smith answered. "A viral outbreak, a military experiment gone wrong, alien intervention, or all these sorts of things. But if the world was going to end, we thought it was going to end because of some stupid human error. And how would you have enough power to do that without this major corporation with all the money and power in the world to push that forward and magnify one person or group of people's mistakes. Especially in games, there's a lot of energy drinks and a lot of caffeine intake, it seemed like the perfect sort of thing. It's funny enough, because it's so dumb and it's never gonna happen, but also, there's not very many companies that make all the food that we eat and drink, so in the back of everybody's mind, there should be that little bit of fear. Maybe this could happen. But we wanted to have human error be the main focus of the apocalypse."