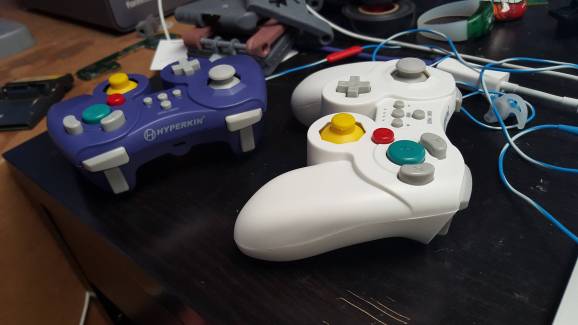 The pros have spoken, and they like what Hyperkin is laying down.

Last week, GamesBeat reported that game-product manufacturer Hyperkin has designed a new take on the Wii U Pro Controller called the ProCube that looks and behaves a lot like the GameCube’s classic pad. The company explained that it was taking the “handmade” prototypes to last weekend’s Evo fighting game tournament Las Vegas to get feedback from Super Smash Bros. for Wii U players, and it turns out that those top-skilled gamers really like the new pad.

“I was there and got to try it out and do a poll for them,” Reddit user Timesthebear wrote in a post. “They are actually really amazing controllers. The d-pad is a lot better than the GameCube controller, and the digital triggers are something I feel are missing from controllers today.”

And apparently, that wasn’t the only person who liked what they tried.

The ProCube is a wireless controller for the Wii U, but it has the button layout like a GameCube pad. You get the big green A button and little red B button along with the kidney-shaped X and Y. But Hyperkin has made a few changes to it that many fans of the original gamepad might welcome. These include changing the way the shoulder buttons operate and adding some extra buttons.

“[Evo attendees] commented on how they love the fact that it will work on all pro-controller supported games,” said Gallizzi.

Unlike Nintendo’s GameCube-controller solution, which enables you to connect the older controller to the Wii U with an adapter, Hyperkin’s ProCube works with any Wii U game that features Pro Controller support. That means you can play releases like The Legend of Zelda: Wind Waker HD, Super Mario World 3D, and Pikmin 3 in addition to Super Smash Bros. for Wii U, which is the only game the Wii U adapter supports.

And even though Nintendo has established the GameCube controller as the best device for playing Smash, some players (maybe not the pros) might even end up preferring what Hyperkin has done thanks to the improvements it has made.

“The one thing that stood out to all survey takers was the bumpers and triggers,” said Gallizzi. “Since they are digital, not analog, they feel as if they get a more immediate response then the original GameCube controller.”

Hyperkin still hasn’t announced when (or even if) it will put the ProCube into production, but that seems more likely after all the positivity following Evo.