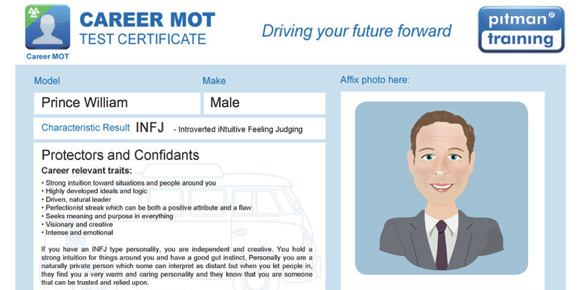 Career MOT is a new app from Pitman Training designed to get you out of the job you hate, and into one that’s tailored to your personality.

What’s that, you actually quite like your job? Well perhaps this isn’t for you, but the statistics suggest you’re in the minority.

According to a recent Gallup survey, seven out of 10 American workers have “checked out” at work or are “actively disengaged”. While in the UK, only 8% of workers feel we’re in our dream job; Over 42% waste up to 4 hours a week dreaming of what we could be doing instead, but 72% of people rate being happy at work as one of the most important factors to their job. Ouch.

If those numbers sound all too familiar to you, then you’ll want to give Career MOT a try. All you have to do is download the app for free, create an avatar, and answer 12 simple questions to form the basis of your MOT.

Once that’s done you’ll receive a breakdown of your personality traits – which isn’t quite as brutal as it sounds, and might actually throw up some positive qualities you hadn’t considered before. It’ll also suggest possible career paths and even highlight development ideas and training courses to get you on track.

A spokesperson from Pitman Training Group, the company which invested in developing the MOT Career app said: “We’re on a mission to help save the future of Britain’s workforce. With America often being a country that delivers the warning signs of the shape of things to come for UK industry these recent figures are very worrying. We are determined to try and stop Britain going the same way!”

Got your interest? Download Career MOT now via Google Play – it’s free, so even if its useless you won’t lose anything more than five minutes of your time.