Microsoft’s Surface lineup is really starting to come into its own, in my opinion. No longer making giant changes, they’re focusing more on refining the products, paying more attention to the little details. And, I for one, am excited about that fact.

The new Surface Pro is no exception to this new ideology, so much so, that you’d be pretty hard-pressed to tell the difference between it and the Surface Pro 4 that it’s succeeding. On the outside, they look identical. Basically.

But, don’t be fooled, the latest Surface Pro (no longer numbered by the way, no 5, just Surface Pro) is not the same as the 4. There’s a lot of little things, that in my opinion, make a big difference.

I recently did a video where I interrogated a Microsoft representative and made him list out all the subtle differences, which you can check out here if you want, but here, let’s talk about the Surface Pro as a whole.

First up, the design. Which again, hasn’t changed much at a glance. It still has the same basic form-factor. With out large display that connects via magnets to a thin Type Cover (not included) and with a kickstand around the back. It’s with the kickstand that these subtle changes start. This time it folds a lot further down, which makes drawing on the screen with the Pen (also not included) way more natural. 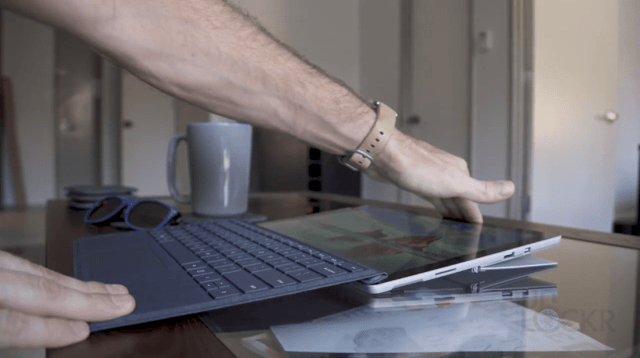 Then we have the edges which are a bit more curved and small things like the cooling vents on the inside are painted to match the rest of the shell making them just a bit less noticeable.

Speaking of the cooling vents Microsoft added a lot of copper to the inside of this guy and basically redesigned the inside components extensively. All of that means that the device runs cooler. So much so that the i5 models of it don’t have fans at all, and the i7 models (the one I have here) do, but I’ve never once heard them turn on. 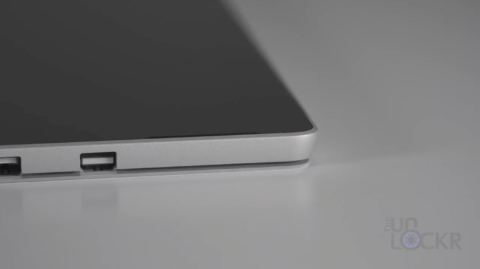 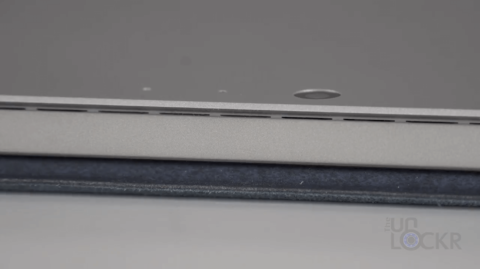 On the front of the device, we have the same 3:2 aspect ratio 12.3″ PixelSense touch screen with a resolution of 2736 x 1824 and a few more subtle changes to the coloring. Namely the front facing cameras are colored black to blend in with the bezel. 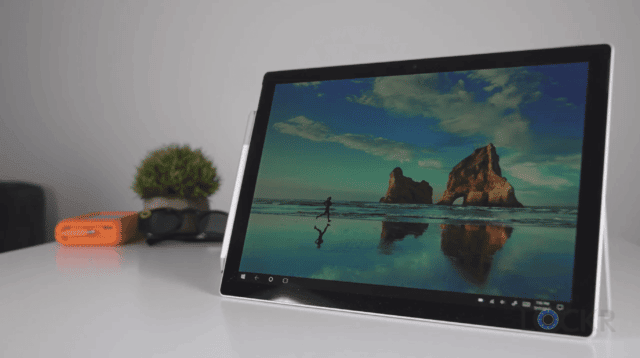 Those cameras, by the way, allow the device to use Windows Hello’s facial recognition to let you log in to your computer with your face, which I find works pretty well for the most part (at least once you do the improve recognition option a couple of times) and is a nice party trick.

The device has two stereo speakers, one on either side of the screen, and they sound good. Nothing mind-blowing and great, but good. Watching movies, listening to music is all decent just not terribly loud. 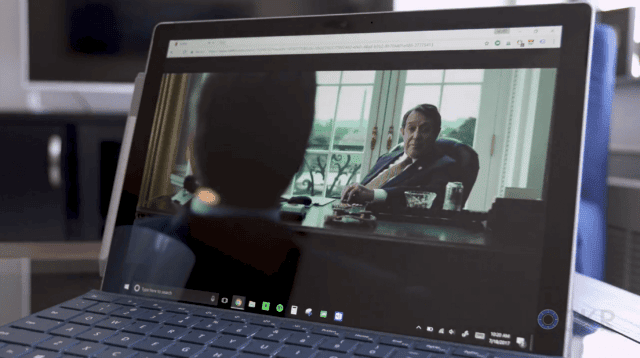 Microsoft is now marketing this guy as a laptop. Gone are the days of the “tablet that can replace your laptop” mantra and it’s now being touted as the most versatile laptop. Which, if we’re being honest is how anyone would really use it anyway. Windows, even in tablet mode, still feels very much like you want to take out a keyboard and mouse.

It’s this concept of it being a super portable touchscreen laptop that I appreciate it for (and actually think it’s smarter for Microsoft to view it that way as well), the only issue I have with this new marketing pivot is the fact that it this laptop, doesn’t include a keyboard and trackpad. Making it, well, not a laptop until you buy that separately.

The Type Pad is available in a standard model for $129 or the Alcantara fabric covered Signature Model for $159. I have the Signature Type cover in the Alcantara Blue I like so much but it also comes in Burgundy and Platinum and I have to admit they do add a nice touch to the very minimalistic laptop that I appreciate. 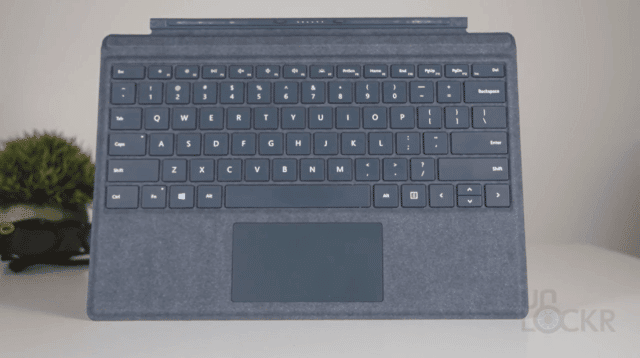 The typing on these covers is great. The keys have a great click to them, albeit are louder than most keyboards I’ve used, especially because I always TYPE WITH PURPOSE.

The trackpad is a nice glass one and is, thankfully, a precision trackpad, which I went over why that’s so important in my Huawei Matebook X review, but suffice it to say it means a way more responsive trackpad with gesture abilities that are built into Windows which, trust me, you want.

The keyboard is also backlit and can fold back against the device which causes it to automatically disable itself so you don’t have to worry about it typing random letters while you draw. 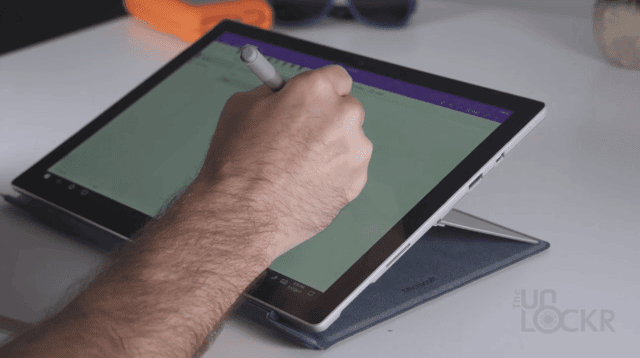 Speaking of drawing, one of the other big draws of the devices is that you can use the new Surface Pen with it. The new pen, launched along side the Surface Pro has 4x as many pressure points as the old pen and the ability to tilt the pen to the side to get shading like you would a real pencil, for example.

I’m not much of an artist, so I grabbed one to use the pen and give me their feedback. Ultimately, they loved it. Saying it was super responsive…. 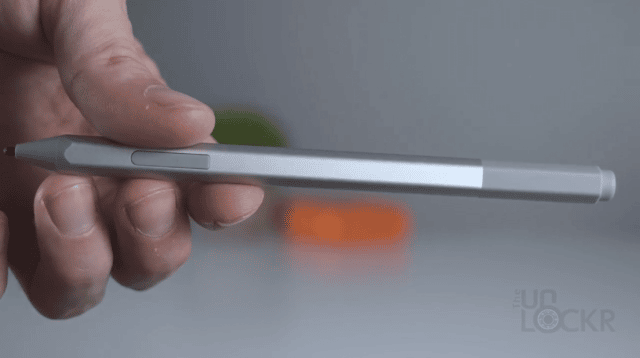 Now, also like the keyboard, the pen isn’t included with the device, but unlike the trackpad, I’m less concerned about that. Someone like me rarely uses it, but I do like it, so to me it more warrants being an optional accessory (albeit one that for $99 you might want to try out, cause it’s fun).

The ports on the device might seem a little dated compared to all the new devices coming out: no USB-C, a proprietary charging port, etc. But for Microsoft, for better or for worse, they are beholden to their legacy user base and need to keep things a bit more standardized so as not to alienate users with existing peripherals. 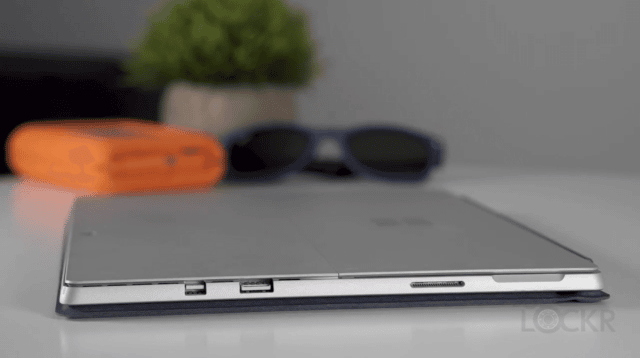 So on the device we have the same ports as the last two Surface Pro devices: 1x USB 3.0 port, a miniDisplay port, and a MicroSD card slot. 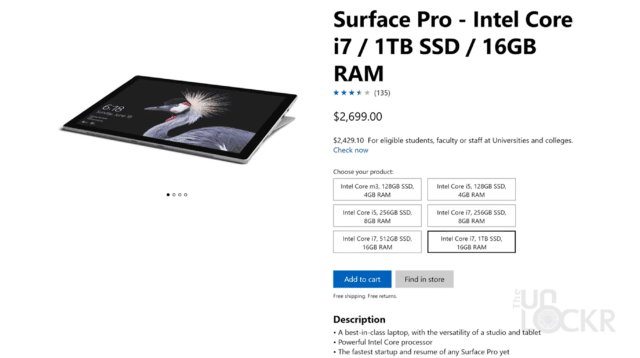 None of these configurations are what I would call a gaming or editing laptop. It doesn’t quite handle the 4K (or 4.6K) footage coming out of my cameras in Premiere very well (even the top tiered model I have here), it can edit it but it’s a little jenky and render times are much longer than my comparably priced gaming laptop. But, it handles basic photo editing just fine as well as slightly less intense 1080P footage in Premiere.

And it handles tons of Chrome tabs, and other more normal usage perfectly.

Since we all love benchmarks, here’s a quick look at how my i7/16GB model did on Geekbench for you to compare against other laptops in this price range. 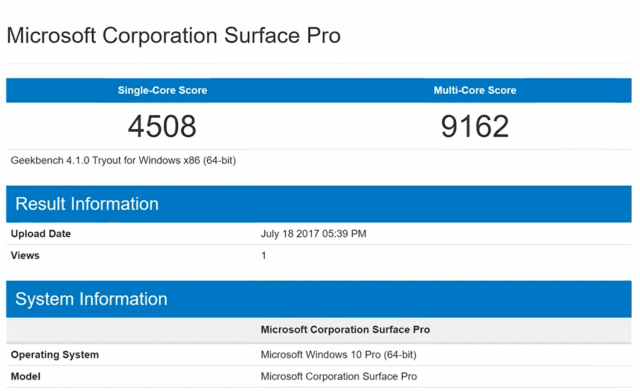 This is a big one. Battery life.

In my opinion, if you make a super light, portable laptop that doesn’t have a crazy GPU inside, it better last all day.

Thanks to those internal changes Microsoft made to the laptop, a bigger batter and the more power efficient CPU made this model do just that. Not quite as long as the Huawei Matebook X I just reviewed, but plenty of power to be out all day working without having to worry about needing a plug. 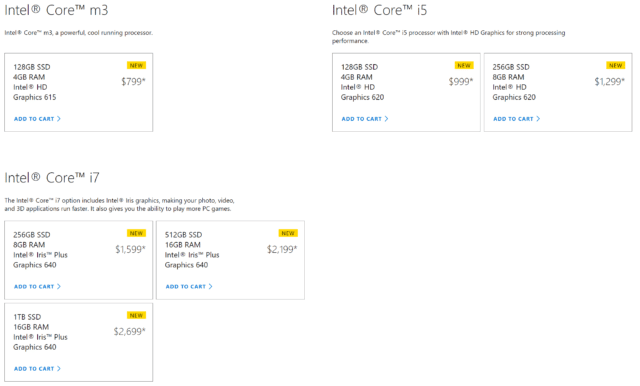 Personally, that core m3 option isn’t one I’d recommend as it’s a mobile processor and will be a huge difference in power over even the very next tier up and the top 1TB option seems like a waste since for the $500 difference to just get an extra 512GB of internal storage is a huge jump in price just for the convenience of it being internally integrated (you could get a pretty fast external RAID 0 rugged Lacie harddrive for $370 if you just needed more storage and didn’t care about it being inside the laptop).

So you’re best bet is somewhere in between these options making it an average of about $1500. Just don’t forget the extra $130-160 or so for a Type Cover and extra $99 if you want the pen. 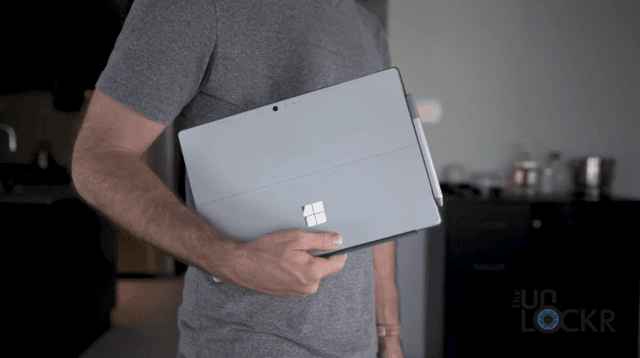 Overall, it’s not a cheap laptop, but it’s not the most powerful one either. It sits in the relatively new genre of 2-in-1s where the question of getting one comes down to whether you’ll actually use it in the different configurations that form factor allows: as a tablet, laying down and using it with the pen, and as a normal laptop.

If the answer is yes to those things, then the there isn’t a large pool of 2-in-1s to really choose from and frankly, Microsoft with its focus on refinement, new confidence in how this laptop is used by consumers, and clear commitment to this form factor has sort of set the gold standard in my opinion. If you’re looking at 2-in-1s, the latest Surface Pro is a refined and more functional take on what the genre should be.