T-Mobile users with Samsung’s Galaxy S7 and Galaxy S7 Edge are getting an update to the June 2017 Android Security patch level. The update will bring Galaxy S7 owners up to software version G930TUVS4BQE1, while the Galaxy S7 Edge will sport software version number G935TUVU4BQF6 after the upgrade. The update files come in at 357.18 MB for Galaxy S7 Edge users, while Galaxy S7 owners will download a slightly lesser 355.44 MB. Alongside the June security patch, the update features “various system improvements,” which is normally code for small tweaks to how a device interacts with a mobile network, though it could be a bit more significant than that in this case, since the Galaxy S7 was one of the first T-Mobile testing phones to pass the gigabit LTE mark, and the carrier recently started testing out 600MHz spectrum in a number of areas.

The June security update for Samsung devices includes, as always, a number of security fixes working in concert with Google’s. The update hit the unlocked versions of the Galaxy S7 and Galaxy S7 Edge not long ago, bringing similar fixes. The patch consists of a ton of critical and high-level security fixes for Qualcomm’s closed-source drivers, as well as a critical fix for Qualcomm’s Bluetooth driver. The Media Framework built into Android didn’t see any critical fixes this time, but had a range of high-priority security fixes in this patch. Naturally, this makes the patch pretty important for Galaxy S7 and Galaxy S7 Edge users on T-Mobile, since their device of choice is powered by Qualcomm’s Snapdragon 820.

Samsung’s Galaxy S7 and Galaxy S7 Edge on T-Mobile are powerful devices with complex software, which means that anything going wrong during an update could cause any number of strange and unpleasant side effects, up to and including total inoperability. There are protections in place to prevent a total hardware failure, or hard brick, but all the same, it’s prudent to ensure that your device is either on a charger, or has at least 75% battery left over when you run the update. It should go without saying that manually powering the device off during the update is a terrible idea. The update should be rolling out to all users with these two devices, so if you don’t see it, try checking for updates manually in the “About Device” section of your settings menu, or giving your device a reboot. 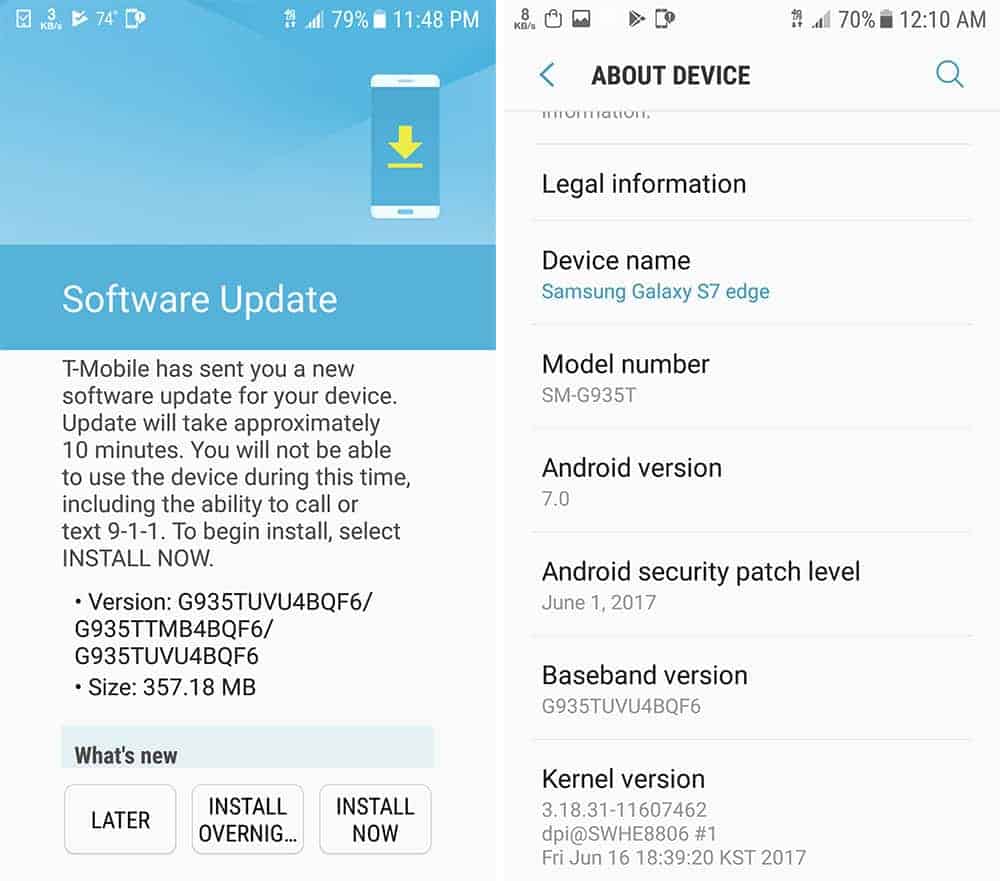