Take the plunge and feel the terror that waits in today’s Kindle Daily Deals spotlighted title: Scary Stories: A Collection of Horror – Volume 2 by Billy Wells 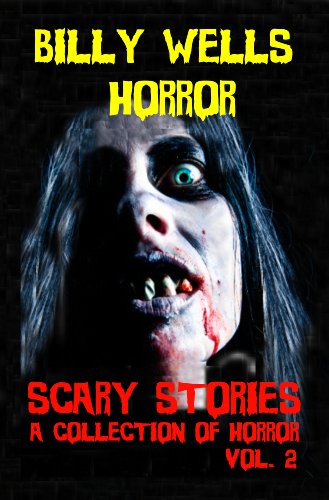 – Learn More
Text-to-Speech and Lending: Enabled
Don’t have a Kindle? Get yours here.
Here’s the set-up:
Scary Stories: A Collection of Horror-Vol 2 is a compilation of short stories, mostly in the horror/thriller genre with surprise endings.
Table of Contents:
Forbidden Fruit: A father buys purple fruit at a roadside stand that turns his youngest son into a ravenous ghoul.
Drool: The city is swarming with zombies as Jerry and Maggie leave to find refuge at his grandma’s farm in the country.
Something in the Ice: A teenager finds a monster frozen in the lake on the same day big cats have escaped from the local zoo and are gobbling up the town folk.
The Refrigerator: A man finds a message for help in a used refrigerator that was once owned by vampires in the house where his father died ten years before.
Fine Print: A computer fanatic finds a game where the players act as judge, jury, and executioner to mete out justice to evildoers.
Til Death Do Us Part: A serial killer gets his kicks by torturing and murdering beautiful women once they agree to marry him.
Something in the Dark: A woman plagued by recurring nightmares that have plagued her since she was a little girl seeks help from the most expensive shrink in NYC to effectively save her life.
The Package: A doctor receives a ransom note in a gift wrapped with ribbons and a bow from a G. Reaper.
Something in the Cave: Mysterious things begin to happen when two friends explore a cave over a thousand feet deep and find a myriad of tunnels someone created long ago.
Gor: An alien seeks revenge when a hunter enters the forest where he made his home and kills three of his animal friends.
5-star Amazon reviews:
“I definitely enjoy Billy Wells stories. Every story is so intriguing. I find it hard to stop reading the stories“
“… I can’t say enough good things about the author; extremely well-written and some serious twists!“