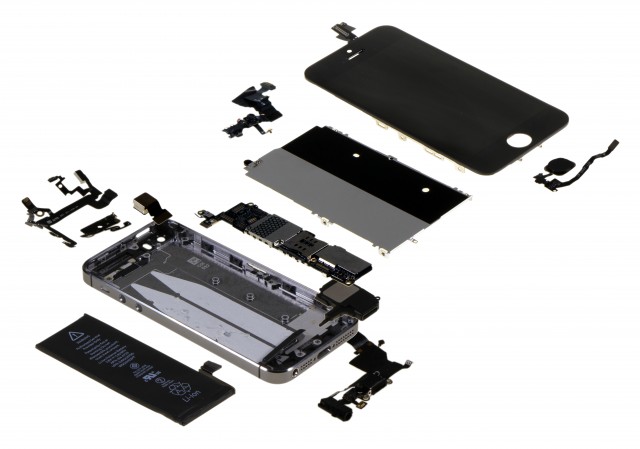 New iPhones always gladden the hearts of the analysts at the research firm IHS, because it means it’s time to tear the phones apart.

This year’s iPhone teardown project was twice as much fun because there are two phone models, the iPhone 5S sporting its muscular A7 processor and an internal fingerprint sensor, and the iPhone 5C, which is at first glance essentially an iPhone 5 but with a candy-colored external plastic shell.

But as is often the case with Apple-designed products, looks on the outside can be deceiving. The results of two teardown studies show that aside from the most obvious differences, the two phones are internally very much alike. Indeed Apple likes it that way. But more on that in a moment.

According the findings of an IHS report coming tomorrow (but shared with AllThingsD today), Apple spends at least $191 on components to build a 16-gigabyte iPhone 5S. The cost rises to $210 for a 64 GB unit. The cost of assembly adds another $8 per unit, bringing the range to between $199 and $218. (Read Walt Mossberg’s review of the iPhone 5S here.)

That cost estimate is pretty close to that of the original iPhone 5, which IHS pegged at about $205 last year. Without a contract, the iPhone sells at prices ranging from $649 to $849, depending on storage capacity.

As with prior iPhones, parts associated with the display command more of that sum than anything else in the phone, amounting to a combined $41. IHS says the display likely comes from several vendors, including Sharp, in which Apple made a strategic investment, Japan Display Inc. and LG Display.

On the iPhone 5C, the lower-priced model known for its colorful outer shell, IHS estimates the cost of components plus manufacturing ranges from $173 to $183 including $7 for assembly. The 5C sells for between $549 and $649 without a contract. (Read Lauren Goode’s review of the iPhone 5C here.)

The differences between them are surprisingly few, said IHS analyst Andrew Rassweiler, who oversaw the teardown work. “I would say that they’re almost the same phone, except that the 5S has the fingerprint sensor, the A7 processor and some newer memory chips that consume less power. Beyond that, they’re basically the same,” he said.

Rassweiler said that Apple also appeared to show a lot of special attention to radio frequency chips in both phones. “Apple seems to be spending a lot of time and money combining RF chips,” he said. “Where other phone companies would be using whatever chips its various vendors sell off-the-shelf, Apple seems to be pushing its RF suppliers to do things they don’t do for anyone else.”

Those vendors, according to IHS’ analysis, are Qualcomm, Skyworks, Avago, RF Micro Devices and Triquint Semiconductor, all of which make chips that handle different aspects of the iPhone’s connections to various wireless networks. These efforts toward getting the radio frequency chips to work together have the effect, Rassweiler said, of allowing the phones to support more frequency bands in a single phone than before. “The iPhone 5 supported no more than five LTE bands. The 5S and 5C can support as many as 13, and that’s unique,” he said. “Unlike other phones designers, Apple has spent a lot of time collaborating with the RF chip companies to find novel solutions that its competitors don’t have.”

Its good for Apple because the fewer technical variations of the iPhone there are, the more profitable the phones are likely to be. Eventually, Rassweiler said, Apple may be able to produce a single version of the phone that supports all the world’s frequency bands, no matter what type of wireless network is present.

The teardown shows that the Apple used the same unique combination of RF chips in both the 5S and the 5C, at a combined cost of $32.

Indeed the similarities between the two phones are many. They have the same display, the same cameras, the same flash memory chips and so on.

The higher-end processor led Apple to choose higher-end memory chips to support it in the 5S. Where the 5S sports a flavor of memory known as LPDDR3 (The LP stands for “low power,” referring to its consumption) the 5C sports a slightly older flavor of memory known as LPDDR2. (I could go on at length about what the other letters stand for, but won’t. If you want to read more, here are the basics.) “The newer memory is there to support the higher-end processor,” Rassweiler said.

Suppliers of the memory chips include SK Hynix — the South Korean chip company that just experienced a fire at a plant in China — Elpida and Samsung.

As usual I asked Apple for a comment on IHS’ findings, and as usual, got none.

One thing I always like about these teardown reports is the “exploded view” image that always comes with them. The IHS shot of the 5S is above, and as you’ve probably figured out given the appearance of the light blue shell, the 5C is below. 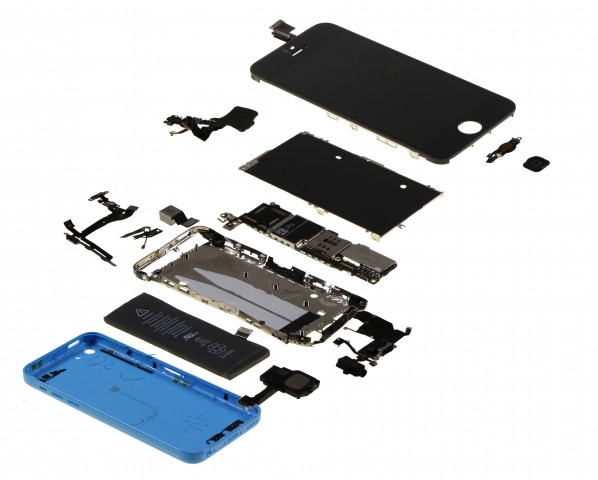