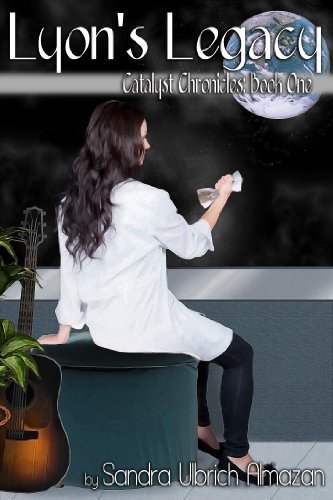 4.6 stars – 11 Reviews
Kindle Price: 99 cents
Text-to-Speech and Lending: Enabled
Don’t have a Kindle? Get yours here.
Or check out the Audible.com version of Lyon’s Legacy: Catalyst Chronicles, Book One
in its Audible Audio Edition, Unabridged!
Here’s the set-up:

Sometimes being a geneticist isn’t enough to understand your family….

Joanna Lyon is the great-granddaughter of the legendary TwenCen musician Sean Lyon. She may have inherited her ancestor’s musical talent, but her parents’ bitter divorce and her Uncle Jack’s attempts to remake her into another Sean have left her hostile toward her family and music. Her passion is for science, but since she has no access to the family funds, she struggles to earn enough credits for graduate school. Then her uncle sets up a business deal with her employer to make Joanna go on a mission for him: travel via the spaceship Sagan to an alternate TwenCen universe where Sean is still alive in Chicago, 1962. Joanna must collect a DNA sample from Sean so her uncle can create a clone of him. She refuses at first, but finally agrees to go. Secretly, however, Joanna believes her uncle will exploit the clone, and she plans to sabotage the project to stop him. But when she falls in love with one of the scientists in the Sagan’s genetics lab, clashes with other time travelers who fear she’ll change how history develops on the alternative TwenCen Earth, and receives devastating personal news, Joanna will find herself pushed to her limit even before she comes face-to-face with her hated ancestor. Their encounter will leave her changed forever. Will she still be able to thwart her uncle’s plan, and what will she have to sacrifice to do so?

This book has earned a B.R.A.G. Medallion from the Book Readers Appreciation Group (please see their review below).