Several weekend price promotions for Apple’s iPhone 5c are raising eyebrows given the newness of the mid-range phone and the fact that Apple products so rarely see discounts. 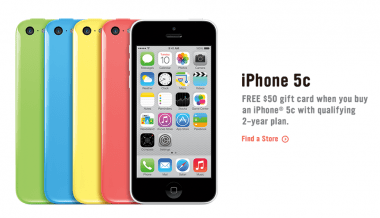 The promotions started with an offer from Best Buy giving customers a $50 gift card with the purchase of one of Apple’s colorful new models. Then Walmart said it would
“roll back” prices on the 5c for a limited time, followed by a $50 gift card offer from RadioShack. The moves are particularly noteworthy given the relative consistency of pricing on Apple products, which tend to sell for their full price until at least the month or two before a new product is expected.

But ascertaining the reasons behind cell phone price moves can be trickier than it appears. When a new tech product hits the market, a quick price cut is often a sign of weak demand. However, when it comes to cell phones, such pricing moves aren’t always an indication of slow sales.

Promotions on phones, even relatively new ones, are not uncommon as retailers such as Best Buy and Amazon trade some of their profit margins in exchange for a higher share of sales for a hot new product. Retailers also can get incentives for signing up new customers–money which can also be used to fund various promotions.

Apple declined to comment specifically on iPhone 5c sales. The company reported better-than-expected first weekend sales of 9 million units for the iPhone 5c and 5s. It also said to expect overall company revenue at the high end of its previous guidance, though it didn’t break down initial iPhone sales by model.

Meanwhile, a report last week from Cannacord Genuity found that the iPhone 5c is among the top three models, along with the Galaxy S4 and iPhone 5s at each of the four major carriers.

One thing to pay attention to is whether any of the promotions are extended. Best Buy’s, for example, is slated to end Monday. It would be even more noteworthy if the carriers were to themselves offer any promotions, and certainly if Apple itself made a pricing move.

For all the talk about Apple creating “low cost” iPhone, the standard iPhone 5c price of $99 for the 16GB version with a new contract is exactly where one would have expected Apple to price the year-old iPhone 5 had it kept that model around instead of creating the 5c. One question is whether Apple designed the product to be priced lower, if necessary, to gain market share or boost its attractiveness in emerging markets.