For thousands of years mankind has spoke of a legendary, mythical city lost beneath the waves. Now, that legend is no longer a myth.Dean Crawford’s high-octane thriller The Atlantis Codex 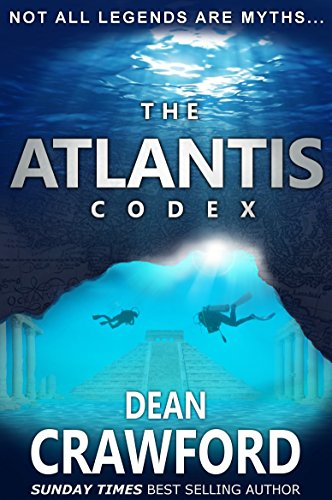 For thousands of years mankind has spoke of a legendary, mythical city lost beneath the waves. Now, that legend is no longer a myth.

Ethan Warner and Nicola Lopez are pulled out of hiding in pursuit of their greatest prize yet: the origin of almost every artefact they’ve uncovered in their investigations with the Defense Intelligence Agency. But now there is a new administration in Washington DC and the Russians are colluding with the White House to seek out the city for themselves. Obsessed with recovering the billions stolen from the corrupt cabal Majestic Twelve, men of power will stop at nothing to obtain untold wealth – even if that means all out war between east and west.

Caught in the turmoil, Ethan and Nicola are deployed to find the lost city before the Russians, but they’re out on their own as America seeks revenge on their team. Hunted across the globe, the final showdown has begun. From India to the Aegean Sea, the fjords of Norway to the humid jungles of Indonesia, Ethan and Nicola must follow clues left behind 3,000 years ago by a Greek mariner, and everybody is out to stop them at any cost…

“The fossilized remains of a 7,000-year-old creature dug from the sands of the Negev Desert in Israel become the bones of contention in Dean Crawford’s fast-paced debut thriller… The book neatly threads together a wild variety of plotlines.” – Wall Street Journal

“The action is frenetic, in the vein of Matthew Reilly’s Scarecrow series. Crawford is an able storyteller who smoothly orchestrates the plot’s twists and turns… ” – Kirkus Reviews

“Partly mythical read, part thriller this pacy tale is a page turner guaranteed to keep you up late.” – The Sun

“Get the cameras rolling—Indiana Jones meets Alien. What a combination of mystery, suspense, and unspeakable horror. I loved it!” – R.L. Stine

“This is an amazingly good, intelligently told novel by an exciting new British author.” – Eurocrime

“Earth-shattering intrigue, hyperdrive action and a desperate race to save humanity, cranked up to the max with scarily realistic science and apocalyptic religion thrown in for good measure . . . a major new talent has hit the mystery thriller scene!” – Scott Mariani

The post For thousands of years mankind has spoke of a legendary, mythical city lost beneath the waves. Now, that legend is no longer a myth.
Dean Crawford’s high-octane thriller The Atlantis Codex appeared first on Kindle Fire on Kindle Nation Daily.