Believe it or not, there are quite a few cocktail-related applications available in the Google Play Store. Just in case you’re planning to have a party at home, or are just looking for something interesting and fruity to drink during the summer, these applications may come in handy, as most of them are recipes for various cocktails. We did do our best to pull the best cocktail-related applications from the Play Store, though, so you should be able to find some non-recipe apps down below as well. 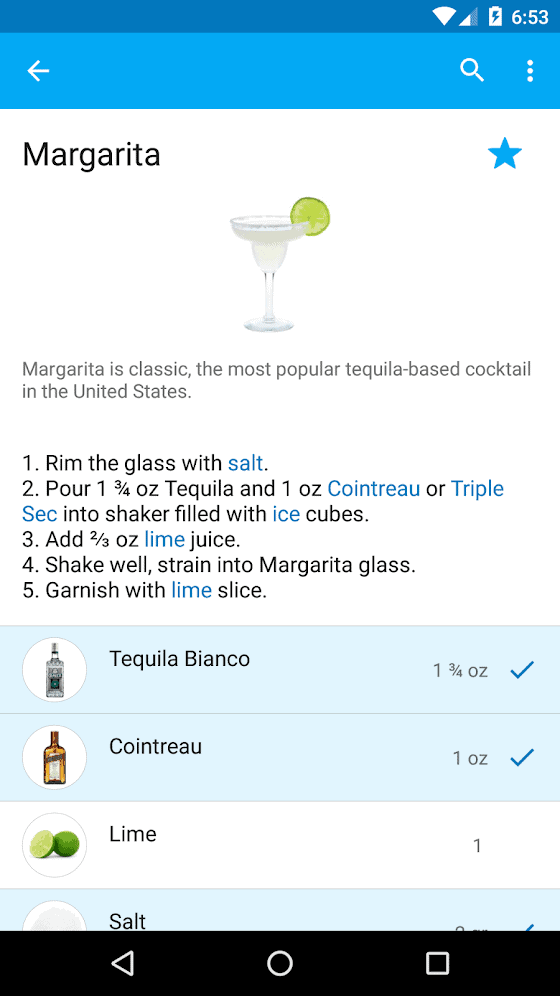 My Cocktail Bar is one of the most popular cocktail recipe applications in the Google Play Store. This app comes in free and paid versions, and the difference is in ads, the paid version doesn’t have them, of course. In any case, if you’re looking to mix up some cocktails, this app offers a ton of recipes, while it also allows you to add your own ingredients in the mix. On top of that, the design of this app is also quite modern, in line with Google’s Material Design, which is not something many cocktail recipe apps can say for themselves. 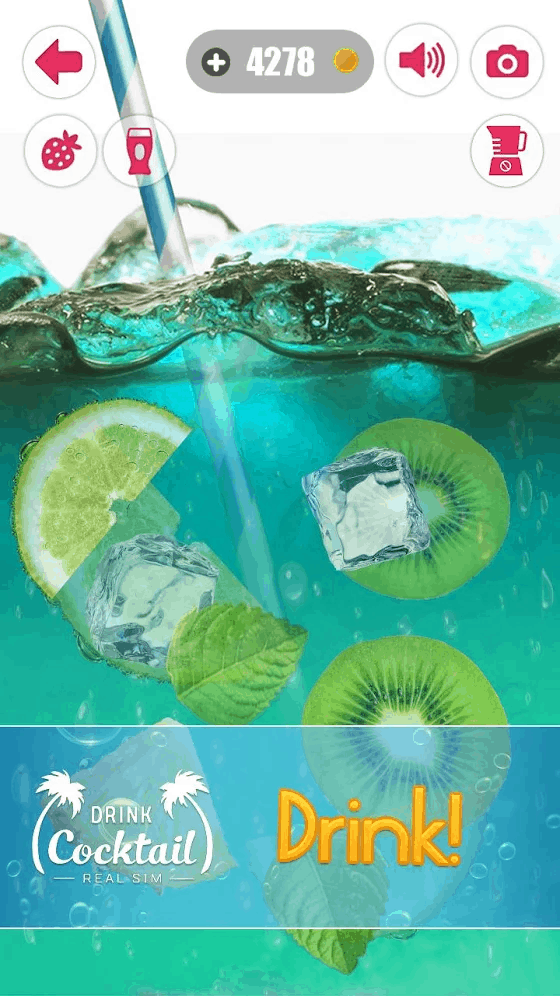 Drink Cocktail Real Sim is not a recipe app, but a cocktail drinking simulator. Yeah, you read that right, this app will basically turn your smartphone into a glass, and it will look like your smartphone display is filled with a cocktail of your choice. You can actually create cocktails in this applications, and then ‘drink’ them like you would from a regular glass. The app does not have a practical purpose, but it’s fun to show your friends, at the very least. This application is free to use, though ads are a part of the experience. 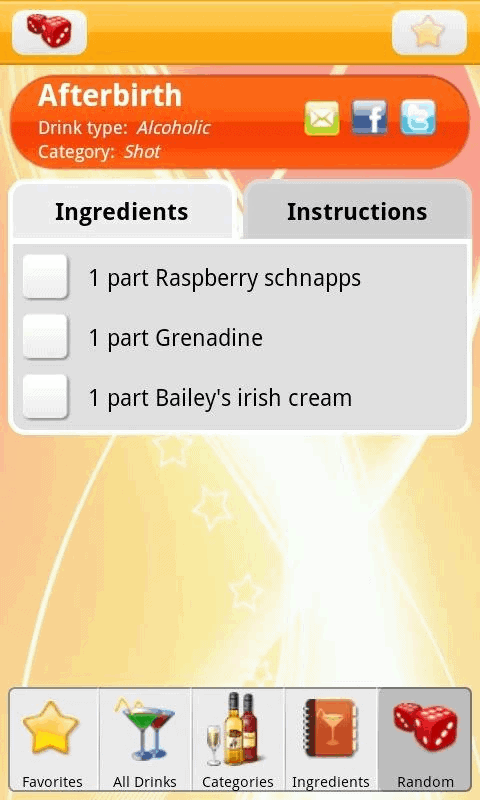 The name of this app is kind of explains what the app is about. This application is all about the recipes, there are a ton of cocktail recipes in there, but cocktails are not all that this app is about. The design of the app is not exactly most modern, not at all, but the app is quite functional, as you will find a ton of recipes in there. This is one of the best-rated drink recipe apps in the Google Play Store, as it is currently holding a 4.5-star rating. The app is free to use, but ads do come bundled in. 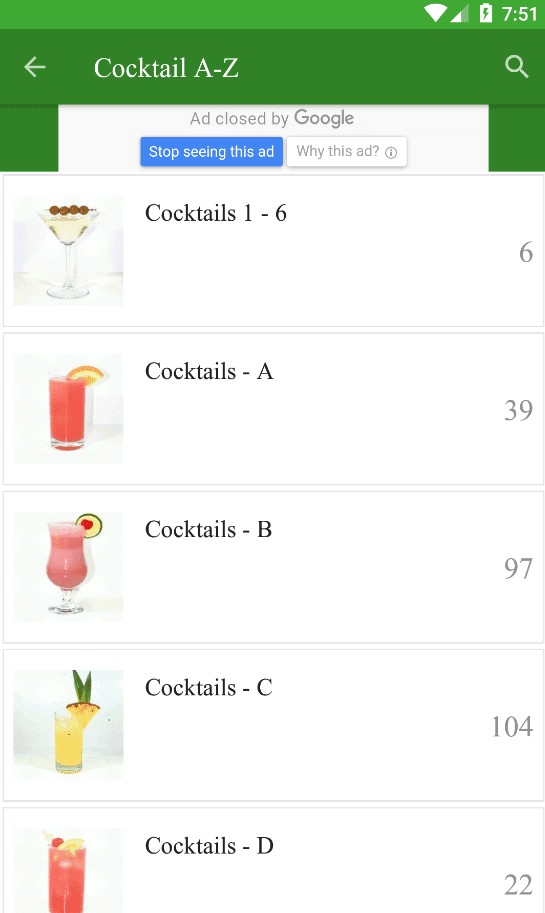 My Cocktail Bar Guide is an that that is currently holding a 4.7-star rating in the Play Store, and is quite possibly the highest-rated Cocktail app out there. This app is more or less an encyclopedia of cocktails, and at the same time a recipe book for cocktails. In this app, you will find a ton of cocktail recipes, and the best of all, the app works offline. You can find recipes, save them within the app, and then simply launch an app when you need some of those recipes. This app does come with ads, but it’s free to use. 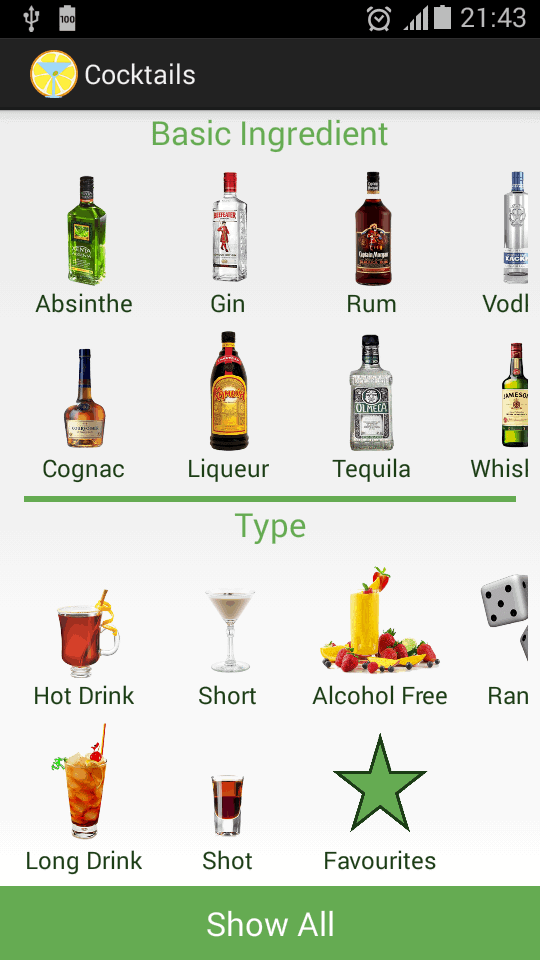 This app is simply named ‘Cocktails’, and much like most other apps on this list, this is a recipe app. The design of this app is better than on most other apps from the list, and this app can also be used offline without a problem. There are over 300 cocktail recipes included in the ‘Cocktails’ app, and you can set your favorite recipes on the side without a problem. Each of those recipes comes with a photo, and the app is completely free to use, though ads are included, in case you were wondering. 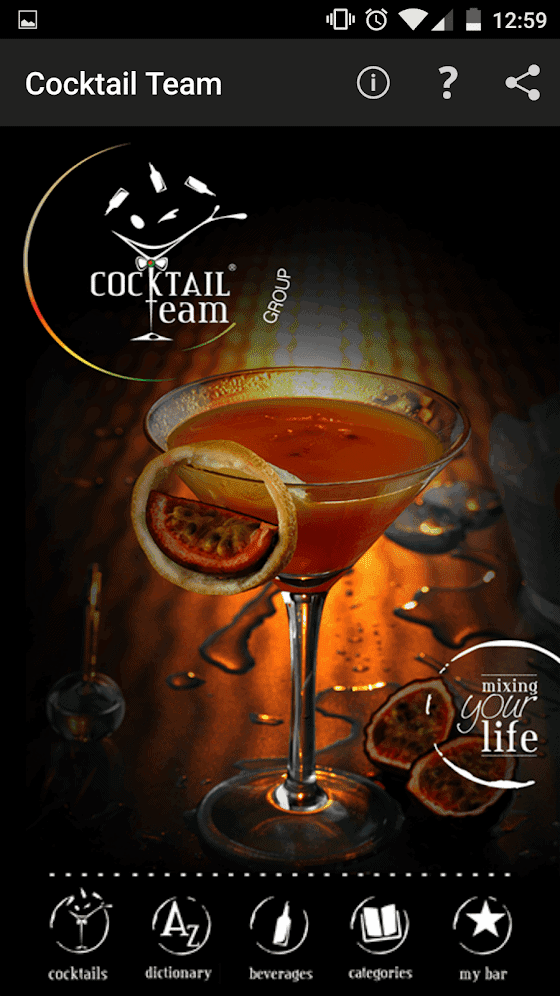 Cocktail Team app is filled with various recipes, and those recipes are not limited to cocktails, despite the fact this app has the word ‘cocktail’ in its title. There are over 250 cocktail recipes included here, plus a ton more various beverages. This app also comes with a dictionary which has more than 4,000 definitions, and the app also allows you to add your favorite recipes to ‘MyBar’, which is essentially this app’s list of favorite recipes. This application is free to use, and it doesn’t seem like ads are included. 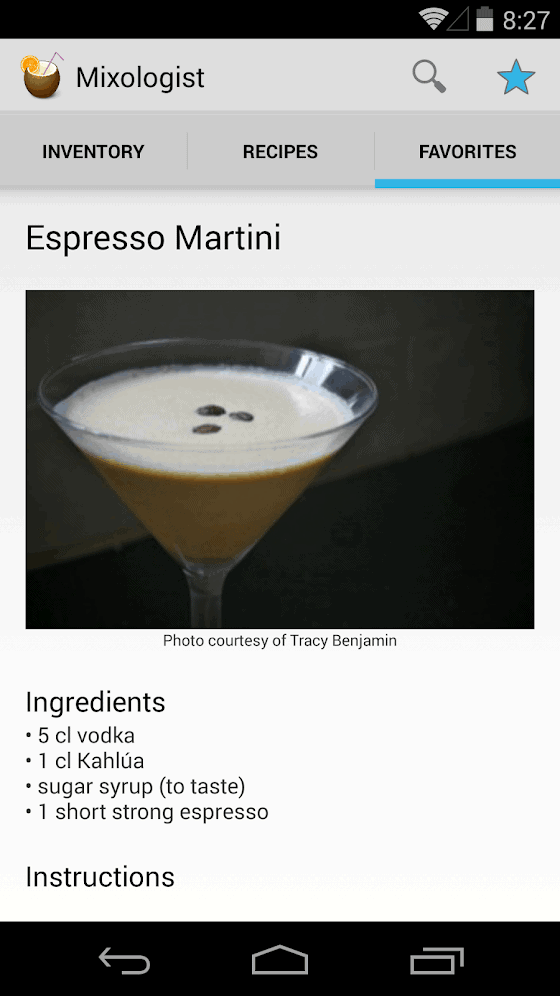 Mixologist – Cocktail Recipes app is one of the better-designed applications on this list, even though its design was made for an earlier version of Android, and it does not exactly follow Google’s Material Design guidelines. This app comes with a list of 77 official IBA cocktail recipes, and you can add them to your favorites, if you want. HIgh quality cocktail images are also included in this app, and the app does not come with ads, while it works offline. This app currently holds a 4.2-star rating in the Play Store. 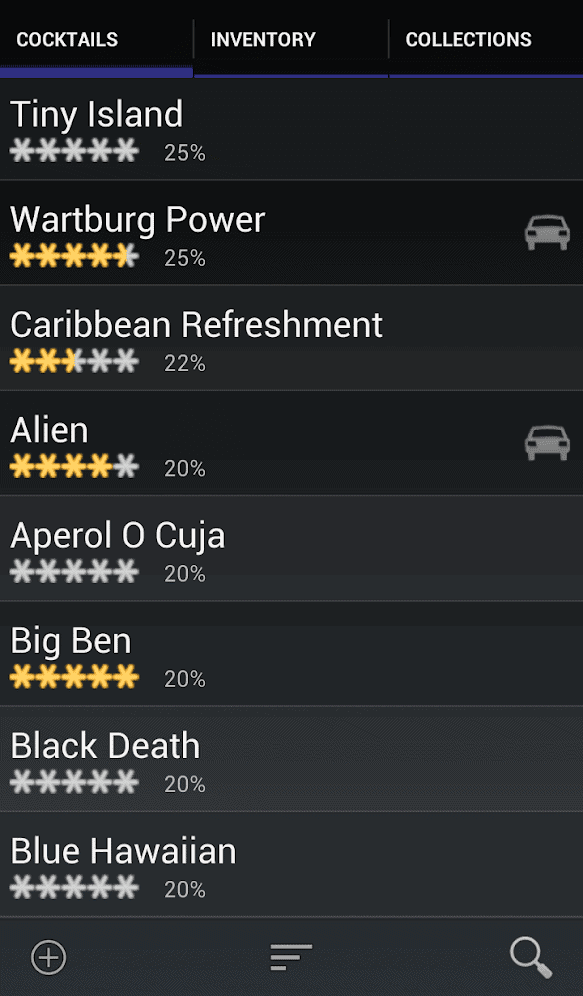 Bar Manager – Cocktail App is yet another app that contains a ton of cocktail recipes. This app’s design is quite dated, which is something you’ll notice as soon as you launch the application, but if you don’t mind that, the app runs fine. This app supports both English and German languages, and you can choose between US and metric systems. There are about 500 recipes included in the application, while ratings are a part of the package as well. This application is free to use, but it comes with ads. 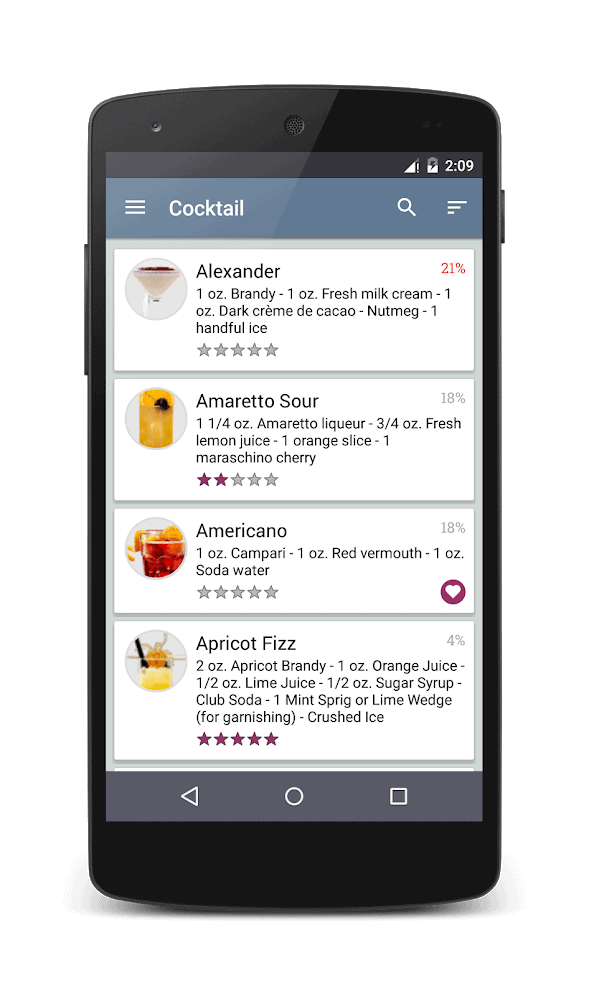 Cocktail Twist is an app with cocktail recipes, like most other apps on this list, but this app comes with some interesting features. You can filter cocktails based on their ingredients, which is not something other apps can say for themselves. This application also comes with a more modern design than most other apps, and you can also shake your phone if you’d like for this app to show you a random cocktail recipe. You can also choose between several themes for this app in its settings, and the app is free to use, but it comes with both ads and in-app purchases. 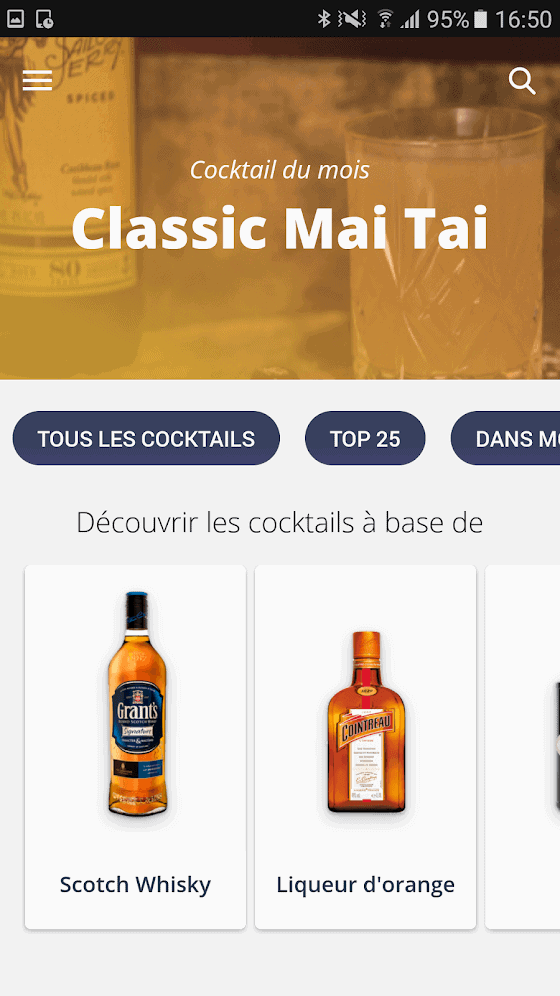 Cocktail Workshop is a cocktail recipe app which comes with over 300 recipes. This app comes with a more modern design than most other apps on this list, and it also includes latest cocktail news. Cocktail Workshop app also has a feature which helps you determine your blood alcohol level, though if you have to check it out, that probably means you shouldn’t drive, you should never drink and drive. In any case, this application is free to use, and it currently holds a 4.1-star rating in the Play Store.