Many people like to listen to music on their smartphones, and in order to do that, you need to have a music player installed on your device. Pretty much every device out there comes with some sort of a music player pre-installed, but finding the right music player for you can be quite a task. Well, out of a ton of music players that are available in the Play Store, we’ve hand-picked 10 that we prefer, 10 of our favorite ones. Having said that, do keep in mind that apps that are listed down below are regular music players, not music streaming services, though some of them do have streaming capabilities. These apps are listed in non-specific order, in case you were wondering. 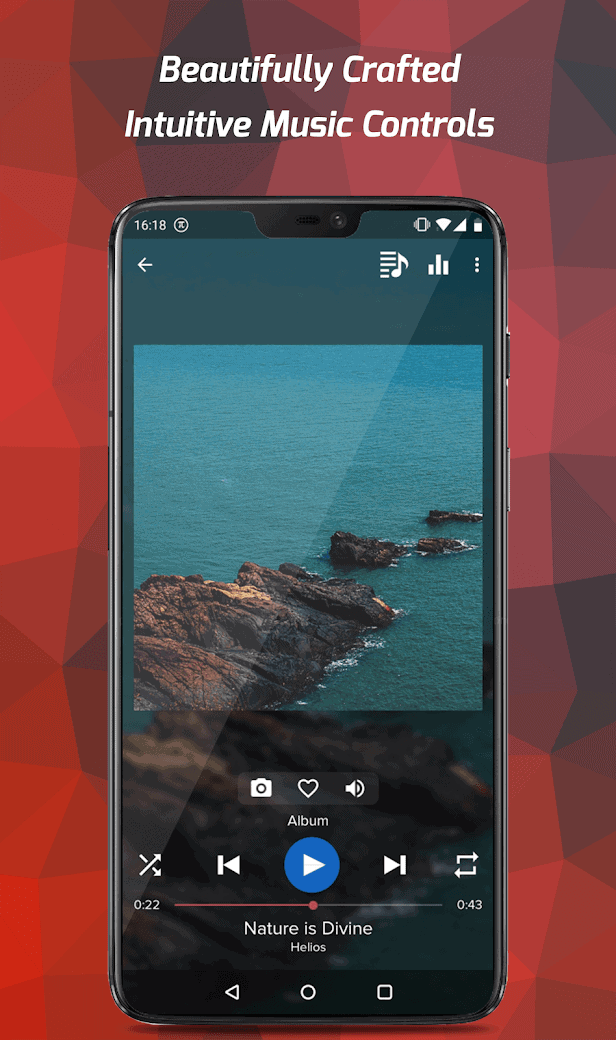 Pi Music Player is one of the best-rated music players in the Play Store, and for a good reason. This app currently holds a 4.8-star rating in the Play Store, and it brings forth a ton of options. The app comes with a flat design, and you can even choose between several themes, including both dark and black themes, if that’s what you prefer. The built-in equalizer is quite powerful and it allows you to tune the player to your own personal preference, while the app also supports audiobooks and podcasts. A sleep timer is included here, and a ton of additional features. 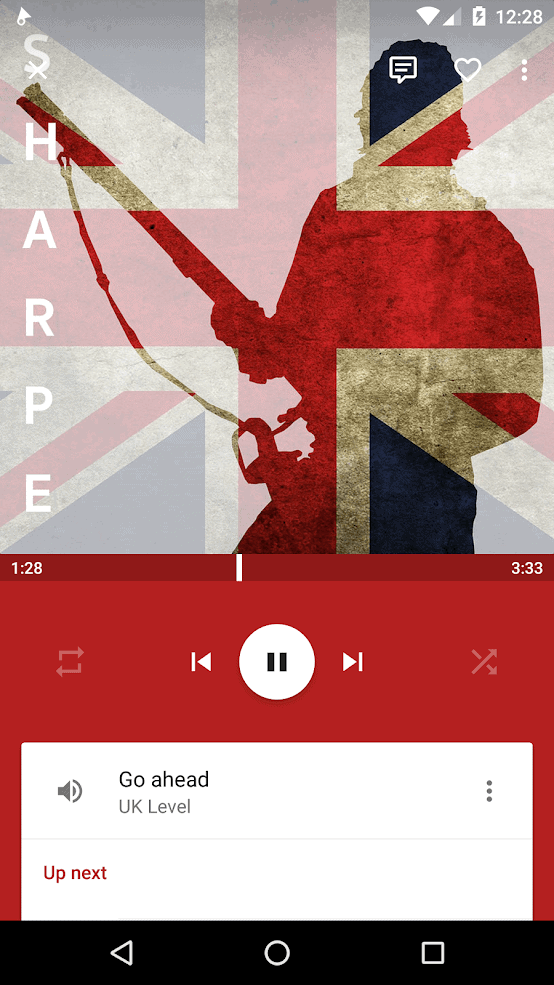 Phonograph is a rather simple music player which is made using Google’s Material Design language in mind. This app offers a simple UI, but it’s quite powerful at the same time. The app includes a homescreen widget, while you can create and edit your own playlists. Last.fm integration is included in this app, while the app is quite customizable as well, it comes with a built-in theme engine, and you can basically choose the color that you prefer for the player, while you can add custom colors as well. 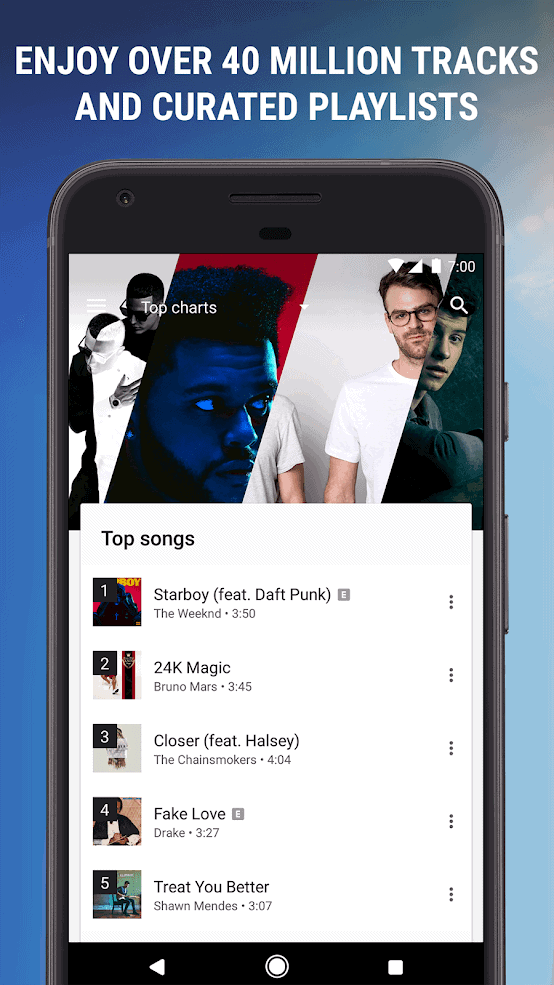 Google Play Music is, first and foremost, a music streaming app, but you can use this application to play music that is stored on your device as well, so you can basically use it as a regular music player. As a regular music player, Google Play Music is extremely simple, which is what some people prefer, after all. You can use this app to upload your music to Google’s servers, and have access to them no matter where you are, while you can cache that music offline when needed as well. 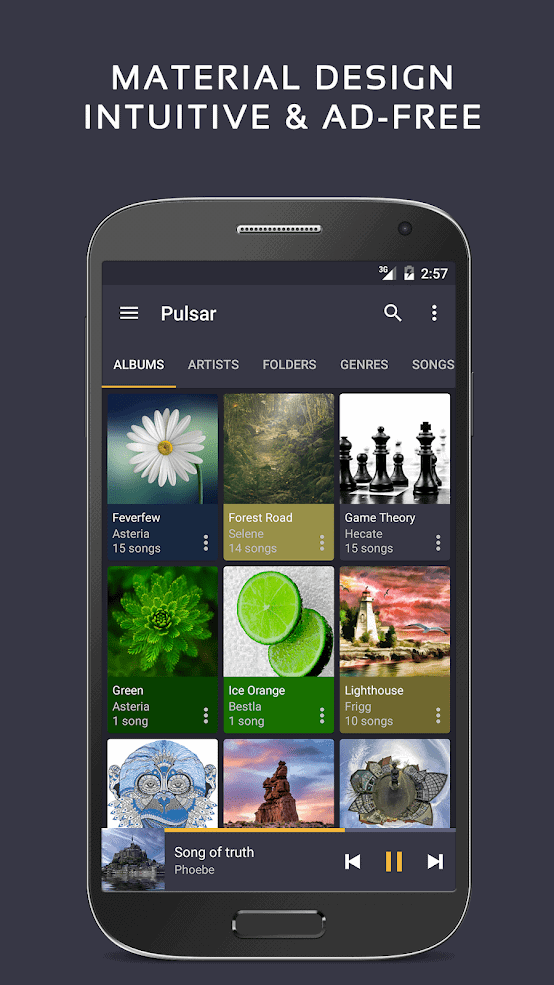 Pulsar Music Player has a rather high rating in the Play Store, it’s currently holding a 4.6-star rating, and it’s quite a capable music player. Ads are not included in this app, while the company applied Google’s Material Design guidelines when it was designing the app. This app is packed with features, as it comes with a music visualizer, equalizer, gapless playback, Chromecast support, ReplayGain, audio balance, sleep timer, Android Auto support, Last.fm integration, and a ton more features. 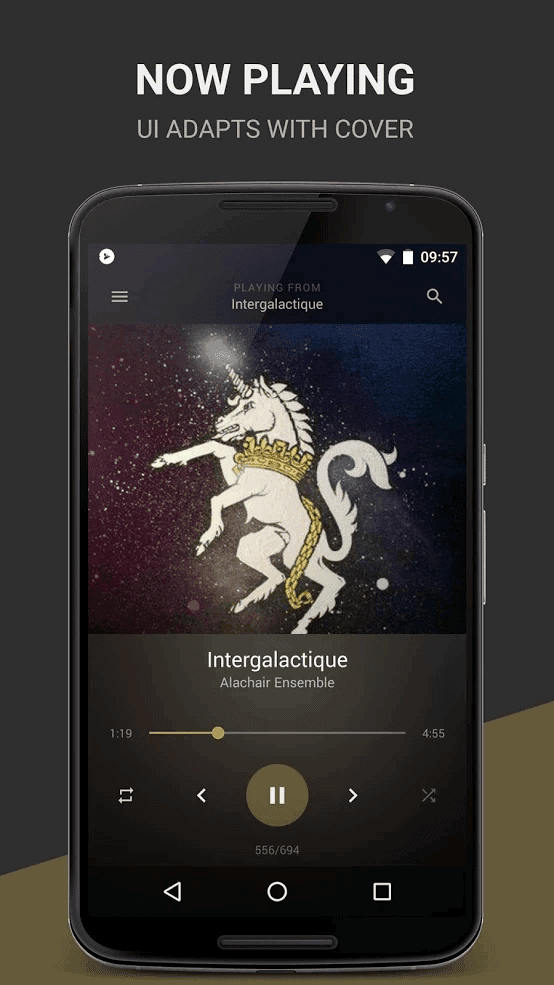 BlackPlayer may be ideal for those of you who like Google’s Material Design and black-colored apps at the same time. BlackPlayer, as its name says, comes with a completely black background, and it’s perfect for smartphones which sport AMOLED displays. This app is highly customizable, and it comes with three widgets that you can choose from. A sleep timer is included in the app, while the app allows you to change themes, fonts, and colors. 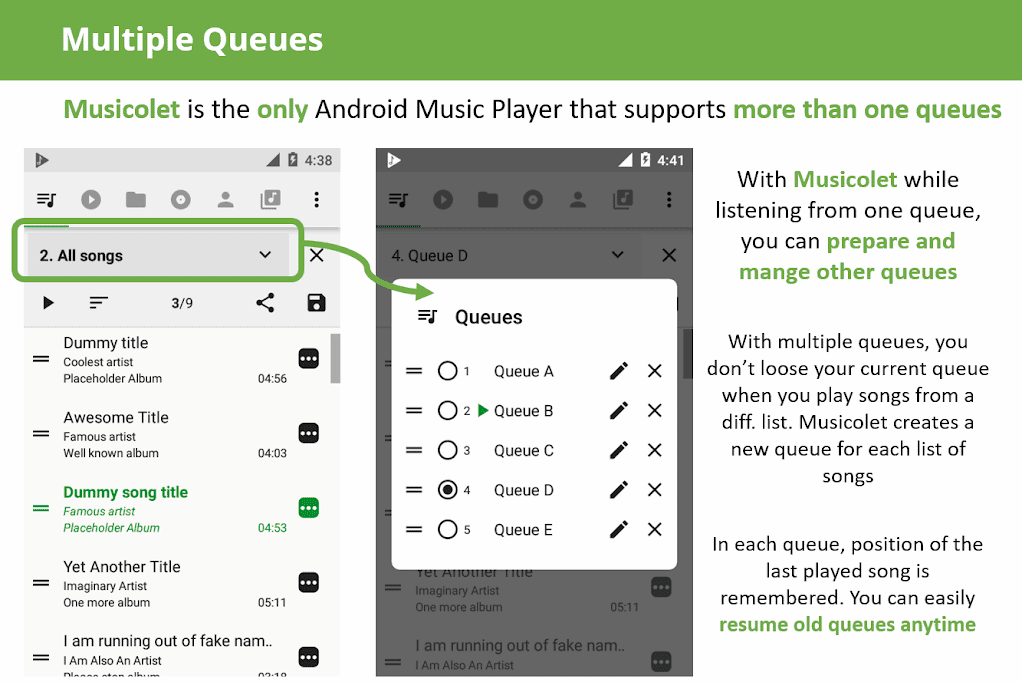 Musicolet is yet another music player which has a rather high rating in the Google Play Store. This application sports a really simple design, and it’s completely free to use. You can create up to 20 queues with this app, as it supports multiple queues, while you can filter your audio content in various ways. You can create playlists using this application, while Musicolet’s very own equalizer is also a part of the package. 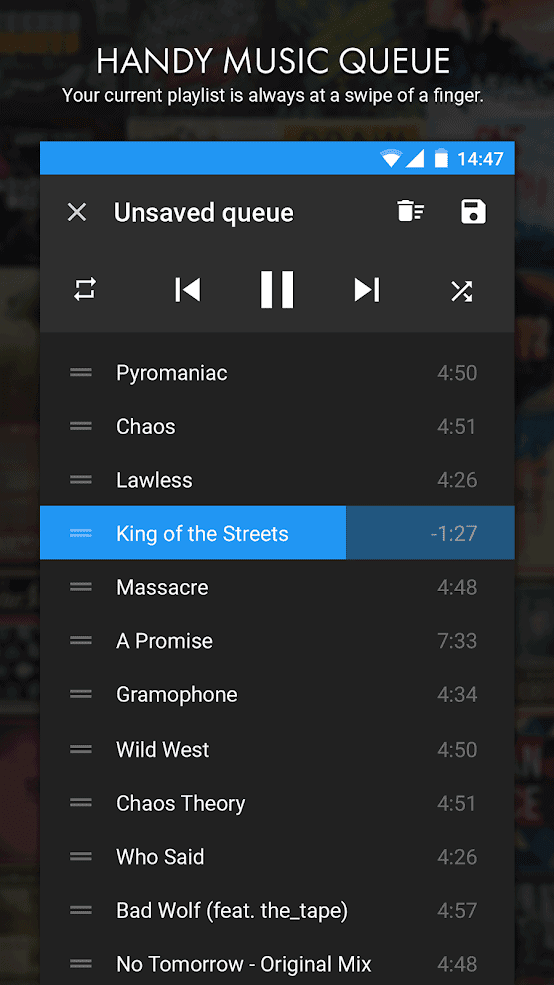 n7player comes with a built-in search functionality, and the app’s design is quite simple overall. This app is also highly customizable, while it has an advanced 10-band equalizer with a ton of presets that you can choose from, in case you prefer those over manually setting the equalizer. This app can play a ton of audio files including mp3, ogg, m4a, wav, flac, etc. There is even a third-party add-on which you can get in order to get lyrics for your songs via this app. 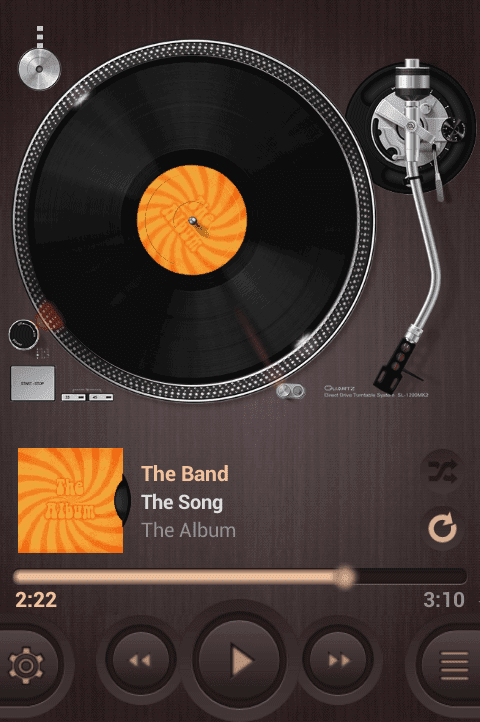 Vinylage is a rather unique music player, mainly due to its UI. This is a retro music player which comes with an animation of vinyl turntables. If you like vinyl and retro-looking music-playing machines, you’ll probably love this application. Three models of turntables are included here, while you can choose between five skins. This app also packs in a homescreen widget, while a sleep timer is included as well. Vinylage definitely stands out in terms of the design, as it’s the most unique music player (on this list) in that regard. 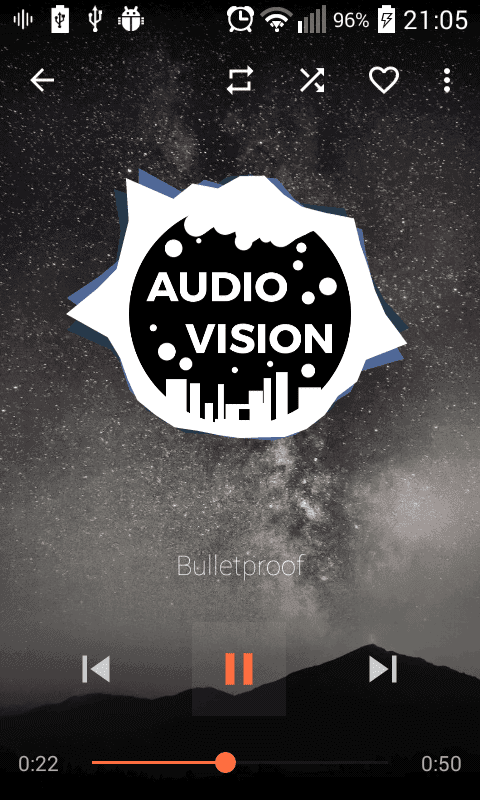 AudioVision is quite a capable music player which comes with all the regular features you’d expect, and it’s quite light. This app has a small file size, while you can select your favorite songs which will be added on a separate list automatically. This app allows you to create, delete, rename and modify playlists, while you’ll also get multi-size widgets and lock screen controls with this application. 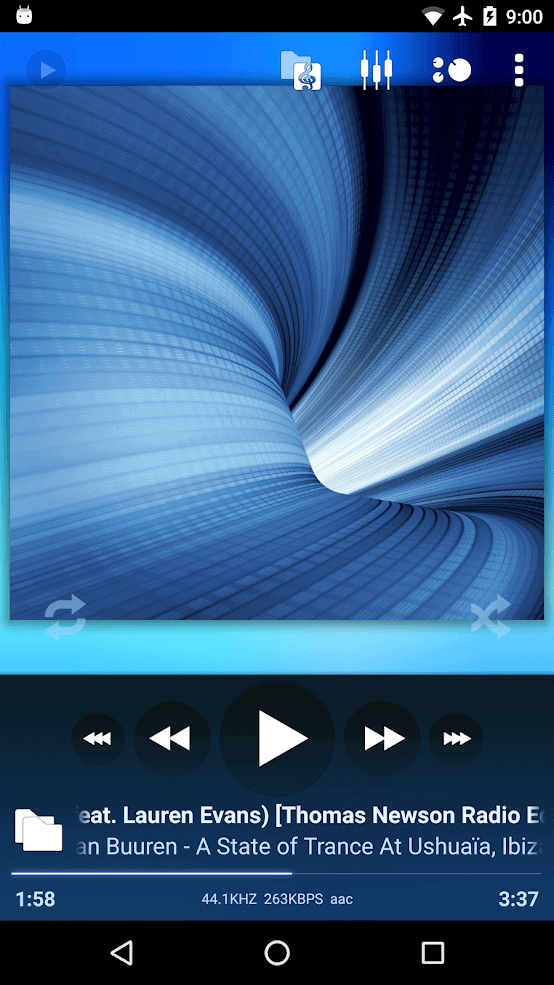 Poweramp is one of the most popular music-playing apps out there, though do keep in mind this is a paid app. A trial version of the app is included in the Play Store, in case you’d like to try it before you buy it, and this app comes with a ton of features. Four widget types are included here, while the app can download missing album art or you. Crossfade, gapless, replay gain, dynamic queue… are only some of the features that are included here, and this app can play all sorts of audio files for you. Poweramp has been around for a long time, and it is one of the most popular third-party music players out there.