There are a ton of pool / snooker games available in the Play Store, which is not surprising considering that quite a few people enjoy playing pool from time to time. That being said, most of the games that are available are quite similar, we’re looking at either 3D or 2D pool games which offer somewhat similar gameplay. Still, some games are better executed than others, either in the gameplay or graphics departments, so we’ve hand-picked 10 that we think may appeal to you, as they are our favorite pool / snooker titles from the Play Store. These apps are not listed in a specific order, so keep that in mind. 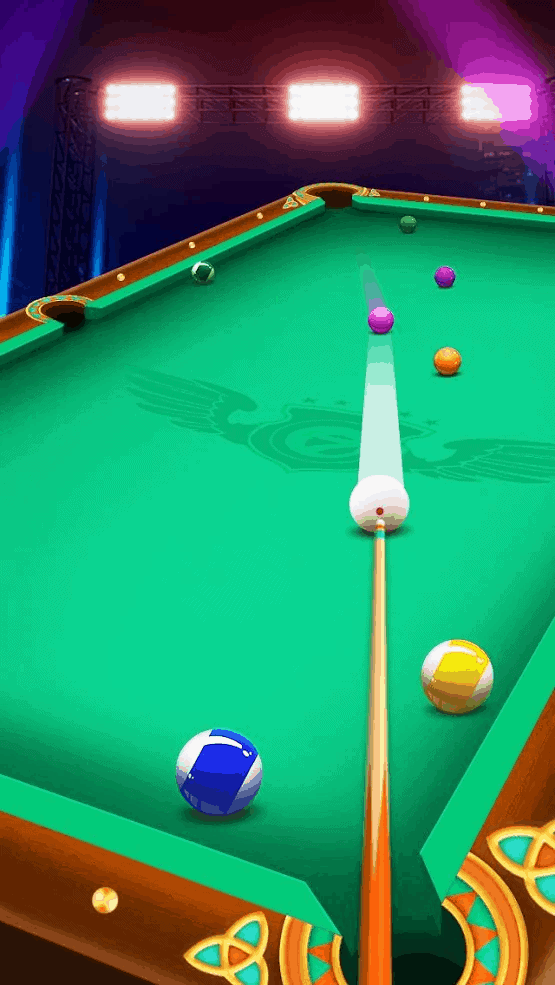 Pool Star is one of the best-rated pool games on Android. This game is free, though it comes with ads, and it is currently holding a 4.6-star rating in the Play Store. As you can see, this is a 3D game, and the developer claims that this is the best one-hand pool game out there. You can opt for a 2D view in this game as well, while you will get access to customized pool tables, cue stick, and backgrounds. Controls are extremely simple here, while you can make an in-app purchase to get coins / remove ads. 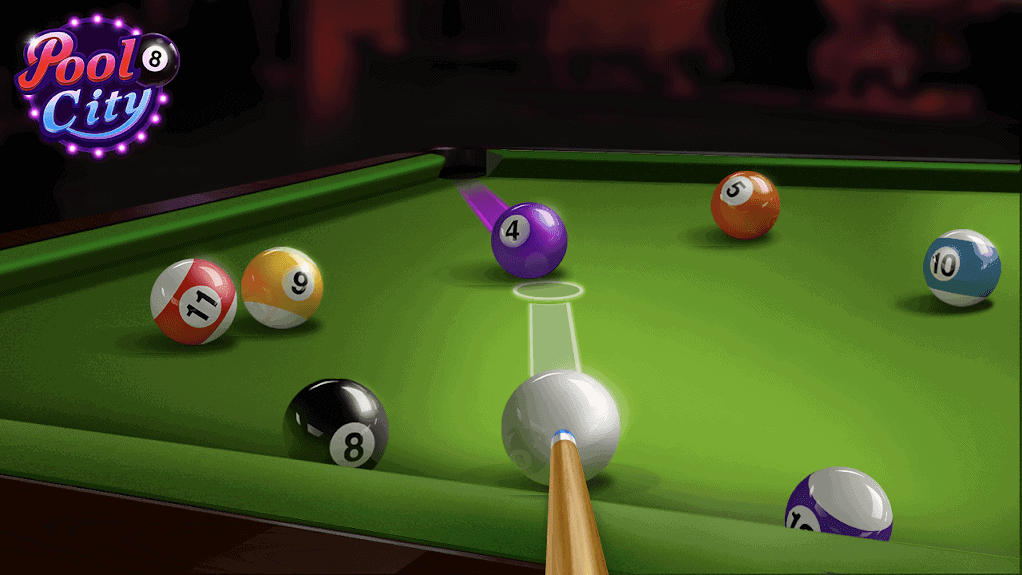 Billiards city is yet another highly-rated pool game, and this game has one of the best graphics out there, one of the best when it comes to pool games, that is. This is a single player game, and it is one of the best pool simulations in the play store. As you play the game, you will gain access to new city bars, while you can also win various trophies in this game, and become the Billiards City Champion if you’re good enough. This app also comes with ads. 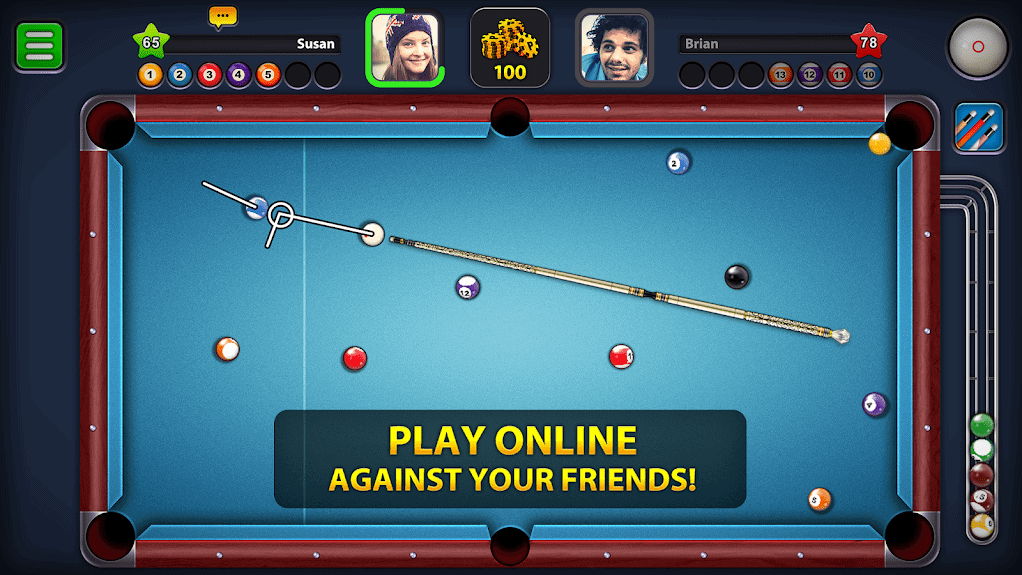 8 Ball Pool is a 2D pool game from Miniclip, quite similar to the one that was available on Yahoo Games (web) before, as that game was quite popular back in the day. In any case, this game lets you compete one-on-one against people from all over the world, or you can try out your skills in an 8-player tournament. You can customize your cue and table if you want, and you can win coins by winning matches, and climb the rankings. Those coins can be spent in the Pool Shop on new items. 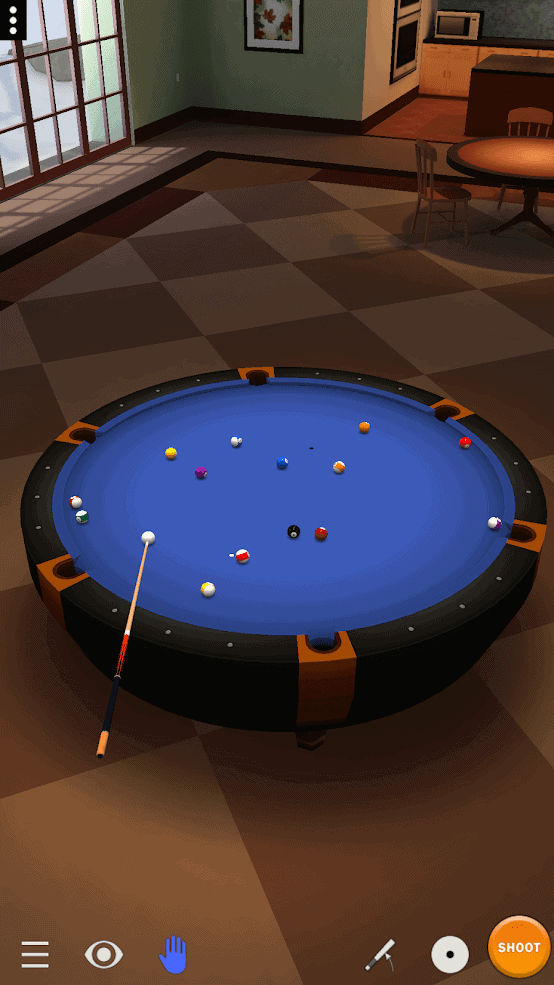 Pool Break Pro 3D Billiards is a paid pool game, but quite a compelling one. This game will set you back around $3, but you will get a lot of worth out of this game for that amount of money, plus you can try out the Lite version of the app before you buy it. You can play against a computer in four difficulty settings, or play online, while chat is included here as well. Regular, circular and hexagonal pool tables are available, while the app allows curve and masse shots as well. You can choose between 15 different cue stick textures, while controls are on point as well. 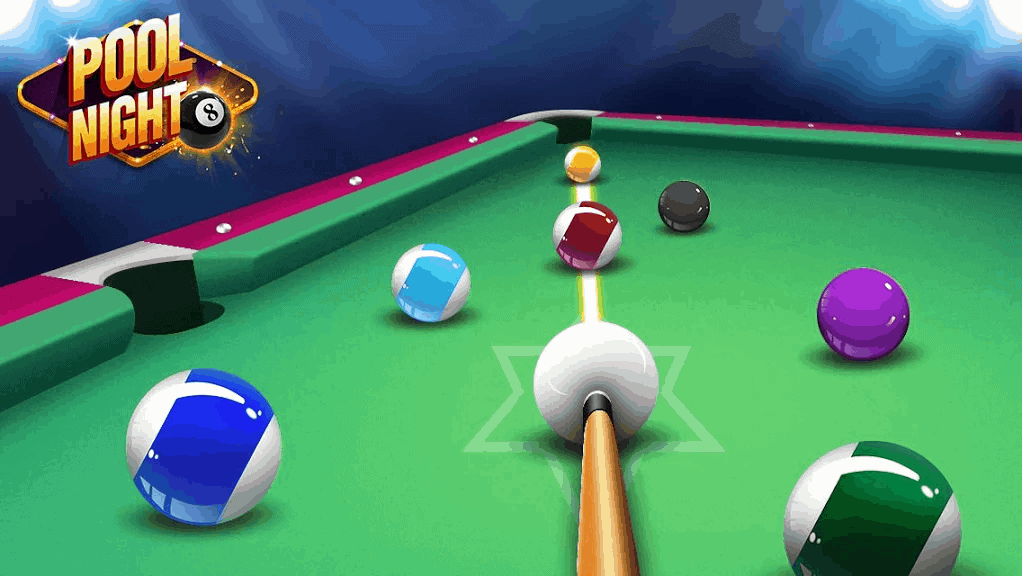 Pool Night is yet another free 3D pool game, which offers great graphics and proper gameplay. This game is actually quite similar to Pool Star, and much like Pool Star, it comes with a really high Play Store rating, a 4.7-star rating. Controls in this game are really simple to learn, though mastering the gameplay is never easy, of course. This game is completely free to play, but ads and in-app purchases are included. 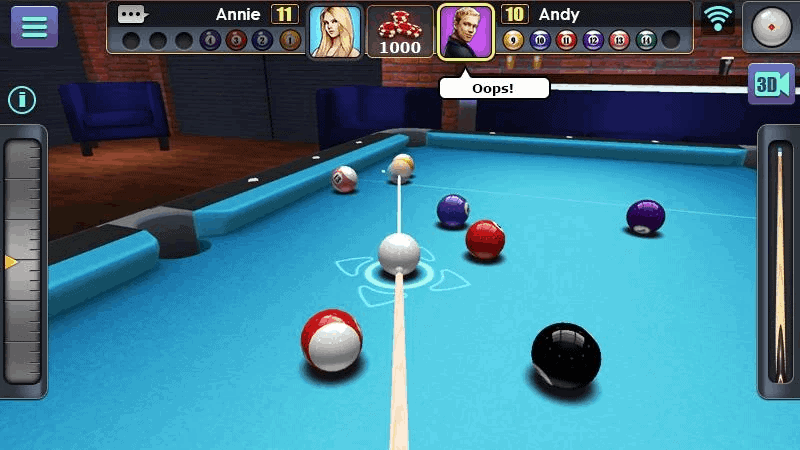 3D Pool Ball is also a 3D pool game, though a 2D view is also available, just in case you’d like to keep things a bit simpler. In any case, this game offers you a chance to play one-on-one, or in an 8-player tournament. You can play this game offline against a computer, or you can play it online against people all over the world. The game is free to play, though ads are a part of the experience, as is the case with most apps on this list. 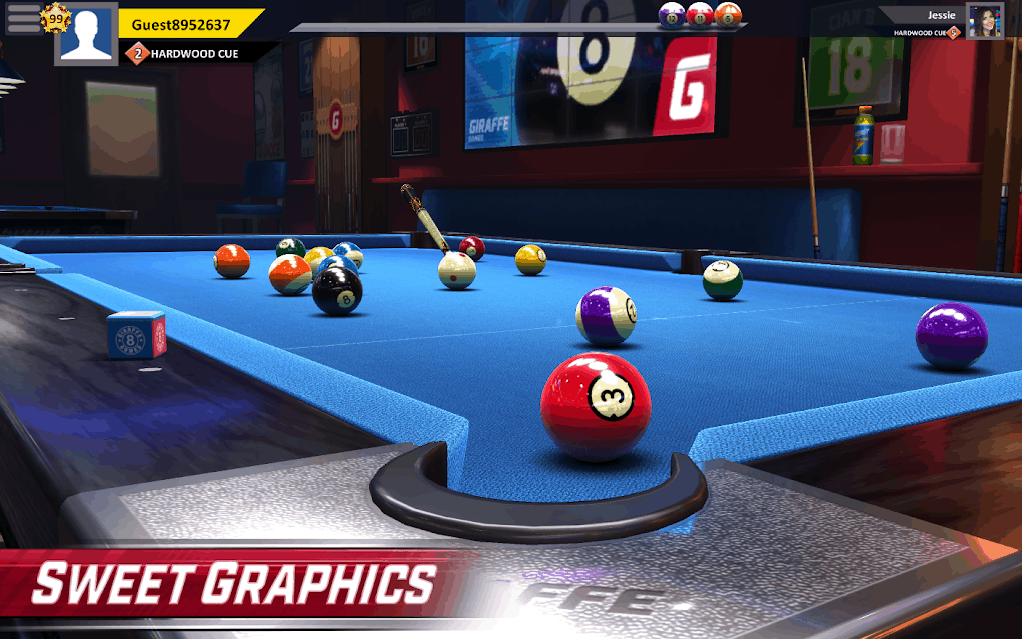 Pool Stars is a pool game which brings gorgeous 3D graphics to the table, though a 2D view is also available. This game offers you to play a single career game, where you’ll be able to participate in competitions, and even enter a training mode. Online gameplay is also an option, though, as you will be able to claim weekly leaderboards, and test your skills against people from all over the planet. 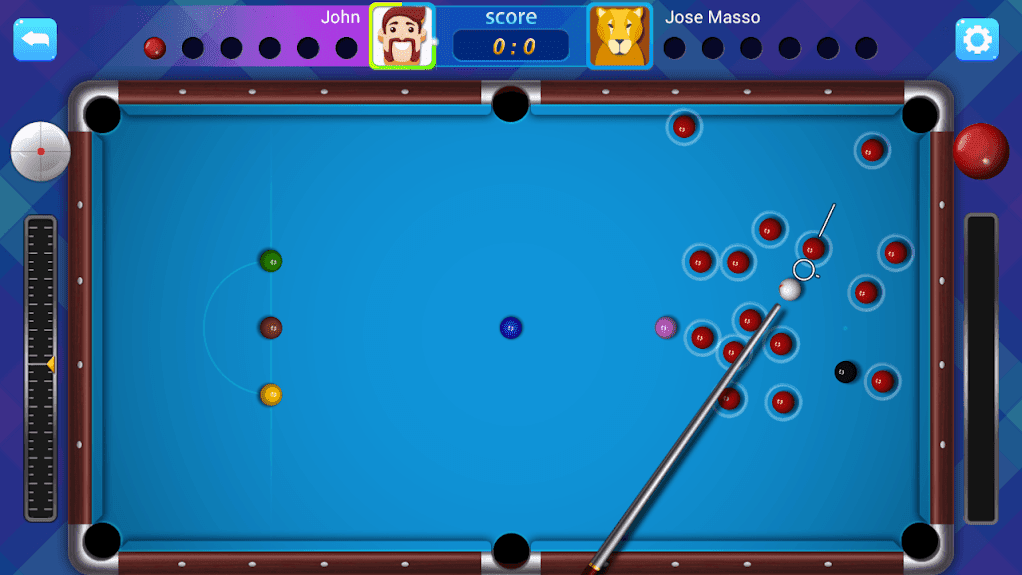 If you prefer snooker to pool, this is a game for you. Snooker Pool is a 2D game, but a really addictive one which offers plenty of gameplay. You can play this game online or offline, it’s up to you, and regular snooker rules apply. You can join the world online league, and fight to be the best. If you opt to play offline, though, you’ll find AI to be challenging enough to brush up your skills. Graphics are okay in this game, nothing spectacular, while ads are a part of the experience. 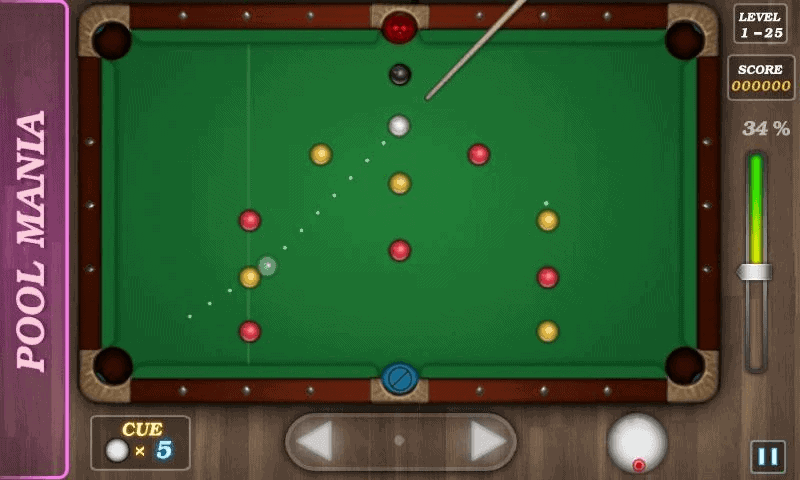 Pool Mania is a 2D pool game, but unlike other games on the list, this game not only offers pool simulation, but an arcade mode as well, with various trick shots and what not. Controls are extremely simple, and the arcade mode offers up to 120 levels. Challenge mode is also included here, and it will challenge you to score as many points as you can in a limited amount of time. Various tables are available in this game, while the developer promised future updates will bring new features. 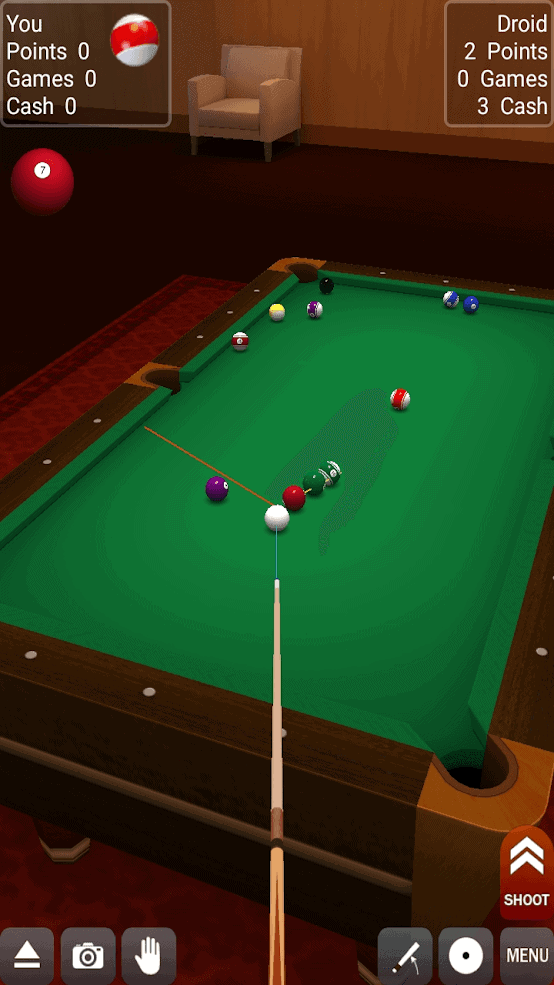 Ball Pool Billiards is one of the newer games on this list, but also one of the most realistic ones. This game is holding a 4.7-star rating in the Play Store, and this is a 3D game with rather realistic physics. This game is considerably more simple than most other games on the list, in a way that it offers fewer features, which does not have to be a bad thing. If you’d just like to enter a game and play pool against a computer, this is the game for you.