Most of us use our smartphones as our primary camera, and we’ve already shown you the best apps for taking photos as well as editing them. There’s still another piece to that puzzle: apps for viewing your artistic creations. Sure, you could use the built-in gallery app on your phone, but there are plenty of excellent alternatives in the Play Store that give you more flexibility over organizing and viewing your pictures. In this guide, we’re going to go over the top ones. Hit the break to get started. 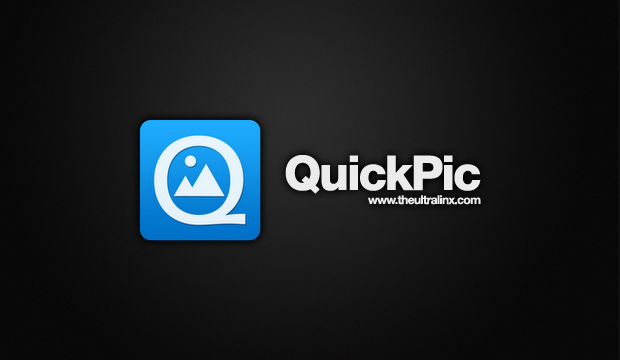 QuickPic is an excellent photo viewing application in the Play Store that’s been around for several years. It has a nearly perfect 4.7 star rating from 166,000 users, which is impressive however you slice it. It’s a very simple gallery replacement that focuses on speed and stability, but throws in a handful of extra features to stay competitive with other apps available.

The developer focuses on crystal clear photo viewing, as well as wide device compatibility. It uses a custom decoder for viewing pictures, which boasts better quality viewing of your photos compared to other apps, and thanks to how lightweight and efficient the app is, it can easily browse even the largest photo collections without slowing down. It also supports just about all major photo file types (excluding TIFF files) and most standard video files, as well as GIFs. Navigating those pictures is buttery smooth and has most functions than a stock browser would have, such as double-tapping to zoom and pinch to zoom, and it even comes with some basic photo editing tools, like cropping, rotating, and setting wallpapers.

The interface of QuickPic is just as great as its feature set. There are several options for viewing your photos, including the standard gallery view, a grid view, a list view, and a file explorer for finding specific files. It can also be set up to include only certain folders and exclude others, as well as hiding and password protecting other photos. Throw in a fully optimized tablet interface and you’ve got a very well-rounded, easy-to-use gallery app.

QuickPic is free and works on any Android device running Android 2.0 and up, so everyone should be able to at least give the app a spin to see if it works for them.

Fish Bowl is probably the most feature-rich gallery app you’ll find on this list. It has all of your standard photo viewing features, such as different ways to view pictures and albums and the ability to move and organize your galleries, but it goes above and beyond in the organization category. Fish Bowl allows you to set several albums as “favorites” that pin to the top of the application, giving you easy access to them regardless of where they are in your gallery list or on your phone. If you have lots of work pictures that you regularly need to pull up to show others, you could pin that album to the top of your galleries to cut down on the time it takes to look for what you need. The app also allows you to set different pictures as the cover photo of all of your albums, which is a nice touch for customization.

Fish Bowl also makes sharing photos very easy with it’s optional Photo Guard app.  It offers a built-in one step resize and share option, which basically crops and compresses your pictures and sends them to another application in one click. It’s designed to make sending a picture via MMS or email much quicker, and keeps you from running into MMS message limits or waiting around while a 13 megapixel photo uploads to an email. You can also add notes to individual photos or even entire albums, similar to some of the gallery features Samsung has implemented into their TouchWiz gallery recently. The notes won’t share to other apps or through MMS or anything, but for organizational purposes, it’s a pretty handy feature. There are also options for hiding photos and albums as well as a deletion guard to prevent you from accidentally trashing any pictures.

The features of Fish Bowl are great, and it’s tough to find a gallery app that does more. The interface, however, leaves something to be desired. Parts of it feel very cobbled together, and the whole thing feels pretty dated compared to newer apps that adhere to Holo guidelines. Still, if you’re strictly looking for features and don’t mind a slightly clunky interface, Fish Bowl is an excellent choice. The app itself is free, but Photo Guard, the app that adds in a few extra features, costs just $1.99.

Flayvr is an oddly named app with an odd take on photo galleries. The app takes all of your photos and videos and organizes them into “flayvrs” based on when and where they were taken. Each flayvr is then basically a flashy slideshow. Any files that aren’t grouped into a flayvr are displayed as smaller thumbnails between the larger albums based on the date they were taken.

Say you took tons of photos on the 4th of July, then just sporadically took a few photos up until Labor Day, when you took a ton of photos again. Flayvr would organize the photos from both of those holidays into an album, and the other photos would be grouped into thumbnails between the two. If you don’t generally take many photos at holidays or events, it may not do you much good, but if you are the type of person that likes to photograph major events, it can help you keep your bigger albums collected outside of all of the other miscellaneous photos on your phone.

You can rename flayvrs, add or remove photos from them, or share them through text messages or any of the major social networks (Google+, Facebook, Twitter). There’s not much you can do in the way of editing or managing files, but if you need something to flash up your albums just to show off or share with your friends, flayvr is excellent. The interface is very clean and intuitive, and the app is free. It’s definitely worth checking out to see if it complements your default gallery app. 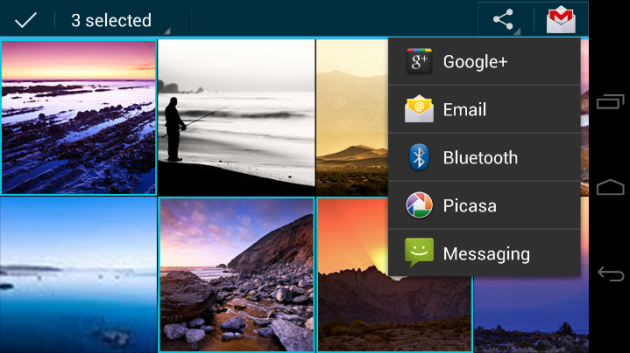 Gallery ICS is the stock Android gallery application that’s included on vanilla Android devices running Ice Cream Sandwich. It’s available in the Play Store as a free download, and if you want to get that stock Android look, this is likely your best option.

Gallery ICS doesn’t have too many features, but it does have an excellent interface and stability. It runs extremely well, is compatible with any newer Android devices, and it comes with all of the traditional photo editing and managing options that are native to Android. You get a few different filters to apply to your photos, the ability to delete and rename photos, and quick access to Android’s built-in share context menu. Plus, it’s perfectly Holo. Who doesn’t enjoy Holo apps?

This gallery app isn’t for everyone, as it is lacking in a few features. If you’re saddled with a phone that’s preloaded with a ton of bloatware and you just don’t like the default gallery app preloaded on Sense/TouchWiz/etc., Gallery ICS is an excellent free alternative to taste how Google designed everything to be.

This one’s weird, but it’s true; Google+ makes an excellent photo manager and gallery app. If you’re one of the many people moving most of their files to cloud storage, it makes sense. Google+ has a built-in photo/video backup feature, and in a recent update, Google added in a shortcut icon to G+ Photos, which congregates all of your G+/Drive/local photos in one app. There are a few small drawbacks (being unable to see any local folders aside from your camera folder, for instance) but the other features make this social network a compelling gallery alternative.

You’ll still get all of Google’s basic built-in photo editing features, including a handful of filters and frames for your pictures. Google+ also automatically enhances your photos for you, which in most cases actually makes your pictures look a little better with 0ut effort on your part. You also get nearly instant access to sharing any of these photos onto Google+, and you’re free to download any of your photos onto your device for local storage. You can also turn on Google’s auto-backup feature to guarantee you’ll never lose access to any pictures you take on your phone so long as you have an internet connection.

Using Google+ like this isn’t a perfect solution for everyone. If you share most of your pictures to other social networks like Instagram or Twitter, it’s a bit of a hassle to manually download those pictures then upload them through another app. There’s also limited support for folders outside of your camera folder, unless you turn the auto-backup feature on and manage everything else on your phone through Google+ servers. It can even handle all of your recorded videos on the cloud, which is a very handy feature. Personally, I think the pros outweigh the cons here, and this is my personal favorite solution. Most newer phones come preloaded with Google+ anyway, so you wouldn’t be going too far out of your way to give this one a shot.

These are just a few of the available apps available on the Play Store. Did we miss any of your favorites? Let us know in the comments.