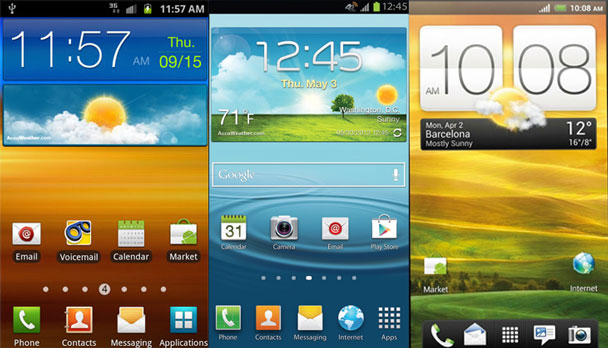 We’ve already gone over some of our favorite launcher apps for Android tablets, but there are just as many great home screen replacement apps for phones. If you’re not a fan of the stock interface that came with your phone, like Samsung’s TouchWiz or any version of HTC’s Sense, these launchers do an excellent job of giving you a more customizable experience, including altering icons and widgets and applying some great looking themes. We’re going to go over a few of the top launcher replacements available in the Play Store to get you started. 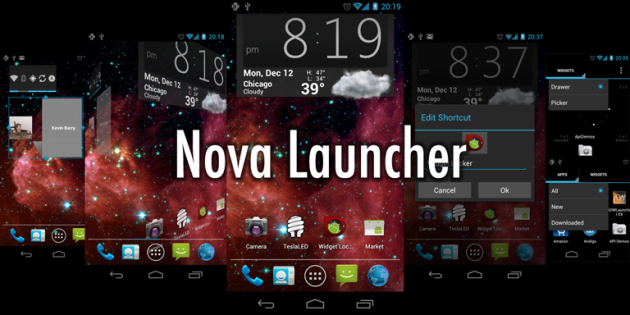 Nova Launcher is a popular third-party launcher app for Android that keeps the same general feeling of stock Android. On the surface, it can be an extremely simple launcher replacement that runs smoothly and gives you the option to resize any widget and adjust a few smaller details of the launcher, like the grid size (how many rows and columns there are for apps and widgets) and the transition effects in between screens. If you want something close to the stock Android launcher but just want an extra row for a few more apps, Nova Launcher works. If you want to get crazy with customization and have 9 home screens with a 7 x 6 grid, you can do that, too.

Where Nova really shines is the extremely in-depth customization options. Aside from the small things like grids, home screens, and transition effects we’ve already mentioned, you can do nearly anything else, like adjusting the transition and animation speed for scrolling through your screens or opening apps, or change the entire color theme of the launcher or the size of your icons. If you use many folders on your home screens, Nova supports different folder icons and custom folder backgrounds, plus smaller tweaks like changing the background of the folder of apps. All of these tweaks apply to the app drawer as well, including folders, which I think is one of the nicest additions over many other launchers. Sometimes, you want to group certain apps together, like all of your games, but many launchers don’t really offer a way to do that. Nova, on the other hand, allows you to make a custom folder or drawer tab in your app drawer, name it whatever you want, then group apps together in it. Using games as an example again, you can create a folder titled games that will show up first in your application list for easy access to anything in the folder, or you can create a drawer tab between your Apps and Widgets just for your games. It’s not only customizable, but it’s extremely handy for power users.

Themes are another exceptionally compelling feature for Nova. There are tons of icon packs available on the Play Store that change all of your other app icons, giving you a bit of extra visual flair when you’re showing your phone off to other people. You can also change an app’s icon in the app drawer or on a home screen from any icon pack on your device, so mixing and matching is a breeze. Another great feature I really enjoy is the ability to rename and hide apps in the app drawer. If you download a third-party Twitter app but wished it would keep the simple name “Twitter” in your app drawer, Nova allows you to change the name of the application as it appears in your drawer and on the home screen. Literally anything you would want to change about a launcher, Nova supports.

Nova Launcher itself is free, but it does offer a Nova Prime upgrade that allows you to put folders in your app drawer as well having unlimited drawer tabs, different gestures throughout the launcher, and unread counts on your apps for things like text messages and missed calls. For $4, it’s a great purchase for those of you that really like to tweak and customize your device. 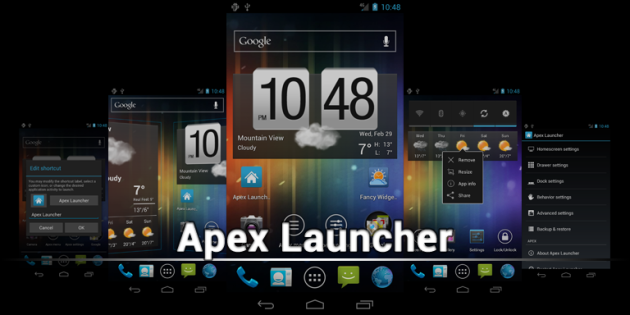 Apex Launcher shares many similarities with Nova Launcher, especially when it comes to customization. It keeps the same stock Android feel with the default app, but the customization features are what really makes this a better alternative to what comes preloaded on your phone. It supports up to 9 home screens with customizable grids, as well as all the other tweaks that make custom launchers so great. You can adjust the speed of animations in Apex, as well as transitions, animations, folders, and application icons.

The theme support in Apex is fantastic, and most themes that are made for Apex Launcher will also work on Nova, and vice versa. You can apply those themes to the launcher as a whole, or just pick and choose different icons out of icon packs for your favorite apps. Apex also offers a few other handy features like a backup/restore function and a way to lock your desktop to keep any accidental changes from happening, plus a ton of options for doing things like hiding your status bar or your icon dock.

Generally, picking Apex or Nova comes down to personal preference. Both launchers are great options with excellent performance, but depending on your device and the way you have it set up, one may give better performance than the other. Since Apex also comes with a free version and a $4 upgrade for a handful of other features, your best option is to try out both free versions and pick whichever launcher gives your particular set up the best performance.

Go Launcher EX is from the developers of the similarly named Go SMS Pro, Go Keyboard, and a ton of other great third-party Android apps. Like those other apps, Go Launcher EX provides a great launcher app that puts its own spin on how home screens should act. It has all of the staple features of other launcher replacements, like tons of transition effects, animation speed tweaks, and gesture based navigation. However, Go Launcher brings other features to the table that really make it stand out.

The theme support of a launcher can be a big deal for many people, and Go Launcher takes that very seriously. There are over 10,000 available themes for Go Launcher, including some themes that also work with other launchers like Nova and Apex. However, Go Launcher themes go a bit further than just coloring some icons; many themes make major changes to the app drawer and other parts of the interface of your homescreens, including indicator dots, app drawers, and other pieces of the launcher. It also supports just picking and choosing certain parts of different icon packs and themes, so if you want to get a theme to massively change your launcher experience or just to subtly change a few details, Go Launcher EX has the bases covered.

One piece of the puzzle that custom launchers tend to lack is widget support. Any Android system widget or app widget downloaded from the Play Store will work on (just about) any launcher you might have, but any widgets from launchers like TouchWiz or Sense are locked to their respective launchers. Normally, that’s not a big deal, but sometimes, those first party widgets are really great and hard to replace with other apps. The Go Launcher team understands that, and they’ve created many widgets that exclusively work on Go Launcher EX to replace some of those higher quality widgets that come preloaded on your phone. They’re all aptly named Go widgets, such as Go Calender, Go Clock, Go Notes, etc. They’re all widgets that will only work on Go Launcher, but they provide great, clean functionality and complete theme support to make sure they match your existing launcher setup.

If you’re willing to put in a bit of extra work on your launcher or you really enjoy high quality widgets, Go Launcher EX is a great free option. It isn’t as simple to get set up as Apex or Nova, but there are more complete themes and widgets available for it. Overall, it’s definitely worth a look if you’re in the market.

Action Launcher is an extremely unique launcher that we’ve covered a few times. It’s drastically different from other launchers, and it gives you a way of navigating your applications that’s pretty different from Android as a whole. Action Launcher essentially relies on gestures for most of the navigation, completely doing away with the “app drawer” and replacing it with a slide out navigation drawer from the left hand side of the screen. You still get access to all of your apps and widgets from this navigation drawer, but it frees up your screen by removing the traditional Android dock.

These gestures extend to applications as well. You can assign folders to application shortcuts as gestures, so, for example, you can set up your browser shortcut to open any folder with more apps in it when you swipe up on the icon. You could set this up to open up shortcuts to specific bookmarks, your Twitter app, or anything else. These gestures also apply to assigning widgets to shortcuts, which is a very cool feature unique to Action Launcher. Swiping up on your music player could open the music player widget, making skipping and pausing tracks a breeze. These widget shortcuts are totally customizable, so a Twitter app can open a Facebook widget or any combination you can think of.

Action Launcher offers a few customization features on top of that, such as icon packs and changing individual icons, as well as some grid customization options and a handful of other tweaks. It won’t compete with some of the other customization-focused launchers on this list, but it’s extremely clean and minimal. Unfortunately, there’s no free option to test out Action Launcher, but at $3.99 it isn’t any more expensive than most other launchers. Definitely worth checking out for the price. 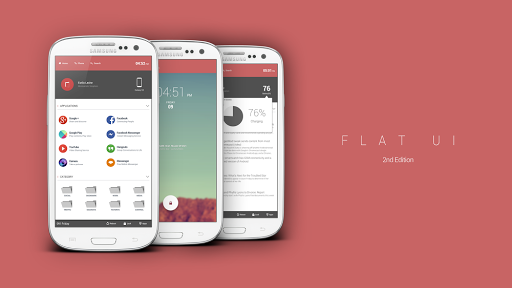 Buzz Launcher is probably the best launcher to use if you’re the type of person that likes to use extremely intricate designs pn your home screen or you enjoy changing the design every few days. The killer feature for Buzz Launcher is its ability to import custom home screen designs, which are automatically set up for you: widgets, wallpaper, icons, everything. There’s a sort of social media sharing site set up within Buzz Launcher called Homepack Buzz, which is absolutely full of “packs” you can download and apply to Buzz Launcher. According to Buzz Launcher, there are over 80,000 unique home screens available for use.

After a pack has been applied, if you’re missing a certain widget or application, Buzz Launcher offers up a placeholder widget or app that directs you to the Play Store to download the missing apps. It’s extremely clean and user friendly. They also offer a powerful Buzz Custom Widget app alongside Buzz Launcher to stretch that customization out ever further. That widget is found in many of the available Buzz Packs, along with other popular apps like Zooper and Ultimate Clock Widget.

If you’re interested in trying out tons of other themes and set ups, or you’re extremely dedicated at piecing together your own, it’s hard to go wrong with Buzz Launcher. It’s free and very robust. However, if you want something a little simpler to use, other launchers may be a better option; Buzz is powerful, but compared to other launchers the interface and options can be a bit more confusing to get set up, especially for beginners. You can check out our previous video review here.

These are five of our favorite replacement launcher apps, but there are still plenty more available in the Play Store. Did we miss any of your favorites? Sound off and let us know in the comments.