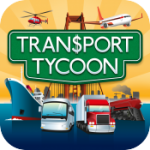 The idea behind the TouchArcade Game of the Week is that every Friday afternoon we post the one game that came out this week that we think is worth giving a special nod to. Now, before anyone goes over-thinking this, it doesn't necessarily mean our Game of the Week pick is the highest scoring game in a review, the game with the best graphics, or really any other quantifiable "best" thing. Instead, it's more just us picking out the single game out of the week's releases that we think is the most noteworthy, surprising, interesting, or really any other hard to describe quality that makes it worth having if you were just going to pick up one.

These picks might be controversial, and that's OK. If you disagree with what we've chosen, let's try to use the comments of these articles to have conversations about what game is your game of the week and why.

The classic 1994 strategy simulation Transport Tycoon [$6.99] made its triumphant debut on mobile this week, and it stuck out to us for a few different reasons. First of all, this is a fairly faithful port of the original game. It does appear to use the visuals of Chris Sawyer's Locomotion, which Transport Tycoon creator Chris Sawyer considers the "spiritual successor" to the original game, but the point is that this version is unapologetically very retro looking. Not in a bad way either, it has a timeless look that tells you this game gets down to the business of management simulation. I love it.

Another big thing that sets Transport Tycoon apart is that there just plain aren't any of these types of simulation games on the App Store with the sheer depth of strategy and gameplay that this mid-90s PC title has. If you go searching through iTunes for a simulation or management game, chances are you're going to get stuck with farming or building a Smurf village or something along those lines rather than a finely tuned title such as Transport Tycoon. I welcome the arrival of more titles with this kind of depth on the mobile platform.

Finally, it's refreshing to see that Transport Tycoon is a traditional premium product where you simply pay the initial asking price for the game and get everything that the game has to offer included. It would have been entirely too easy to deconstruct Transport Tycoon and affix timers or energy mechanics or IAP coin packs into the mix, but the developers decided that offering the same one-off experience as the original was the best way to please fans, and kudos to them for that. I'm definitely not opposed for paying for future in-game content, however, especially if it was some sort of upgrade that added in the new feature from the 1995 follow-up Transport Tycoon Deluxe.

If you crave a meaty, challenging, strategic simulation style game where you'll be rewarded and actually required to use your intelligence and skill to be successful, our Game of the Week pick Transport Tycoon should be right up your alley.