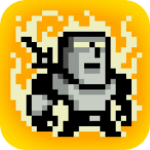 If there is one genre that is having a great go of things thanks to the mobile gaming surge, it's physics-based puzzle games. But if there is a second genre, it would have to be the RPG. With major western RPGs like Baldur's Gate [$9.99 (HD)], major Japanese RPGs like Chaos Rings 2 [$15.99], and a bevy of unique hybrids and smaller-scale work from lesser-known developers all under one beautiful gaming roof, RPG gamers have it good on iOS. The coolest thing about this boom is that we've seen some really interesting ideas that probably never would have even been attempted on other platforms, like Tower of Fortune [Free], a curious little roguelike/slot machine hybrid that caught a fair bit of attention a couple years back. It had some similarities to the great King Cashing [$2.99], but brought enough of its own unique style to find success, and so like that game, we are now lucky enough to be playing a sequel.

At first glance, Tower of Fortune 2 [$1.99] looks an awful lot like the first game. It possesses the same faux-Game & Watch graphical style, a fairly similar user interface, and follows a fairly similar structure, with your character attempting to reach the end of a tower by fighting his way through each floor. However, the more you dig into the game, the more it's apparent that this is a proper sequel in every sense one could hope for. It builds on every aspect of the first game to such a degree that it makes the poor thing feel positively obsolete, and all without compromising the core that made it so enjoyable in the first place. 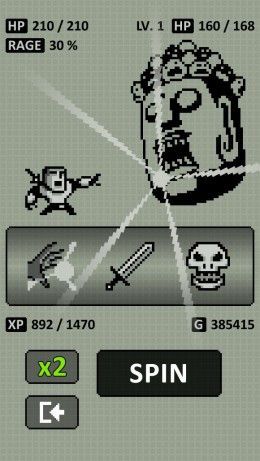 Those who were lucky or stubborn enough to finish the first game know that there were multiple endings, and not all of them were good. In the sequel, a bad ending is assumed, and he's tackling yet another tower in hopes of setting things right again. Of course, once again, we have multiple endings, so whether or not he finds his happy ending depends on what you do. This time there are nine different endings, dwarfing the original game's three, so you've got a lot of work ahead of you if you want to see everything. Like before, the tower is broken up into unique areas, and unlocking each new area requires you to pay a sum of cash. You'll additionally need to beat the boss of each floor in order to move on.

Of course, the main mechanic of the game revolves around slots. On each floor, you need to explore ten times before facing the boss. To explore, you simply play the slots. Depending on what comes up, you'll either find some meat or ore, camp for the night, take some unavoidable damage, or fight. The first two additionally have a random chance of an NPC encounter. There are quite a few different NPC encounters, and they'll have you doing everything from giving directions to arm-wrestling an orc. Depending on what you do, these can also lead into a fight. No matter what comes up, on the fifth and tenth turn, you'll face a mini-boss and a boss respectively.

Battles are also played using the slot machine, this time with the outcomes being a physical attack that damages the enemy, an enemy attack that damages you, a magic attack that stuns them, and a charge-up move that eventually culminates in you turning into a powered up rage-beast. Getting the same type of move on the next turn sets up a combo that intensifies the effects. If you win, you'll get some experience points and a chance to spin the slots for some gold. If it's a boss, you'll also earn a piece of equipment. In the case of all spins, whatever comes up in the first position determines the outcome, with subsequent matches in the second and third spot increasing the power of the result. 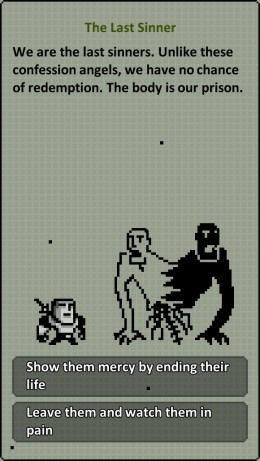 Like in the original game, you can spend 100 gold coins to double down any wager in the game. When exploring, this translates to more resources or health recovered, or more damage incurred from a trap. In battles, the effects of everything are doubled, which can turn the tide in a tough battle, or finish you off, depending on your spin. Naturally, when opening chests at the end of fights, you can also double down to predictably gain double the coins, a wager certainly worth making after dispatching a mini-boss or boss.

One new element Tower of Fortune 2 introduces is the ability to re-spin. If you don't like where your spin is going, you have a brief window in which you can hit a button to try again, at the cost of 50 gold. Each subsequent respin increases the cost, so you shouldn't just jam on the button every time you get an enemy attack in the first spot. This adds an extra element of strategy to each spin, as your gold can literally save your life if you're fast enough. It's an edge you'll need.

As I mentioned back at the beginning, this game basically captures the spirit of a roguelike, particularly in its most important aspect: perma-death. If you run out of HP and don't have any healing or resurrection items, you're finished. You lose all of your levels, all of your equipment, and are sent back to the beginning with just the gold in your pocket and a few other things. Any levels you paid the toll to open up will still be open, provided you kill the boss of the prior stage again, and any upgrades you made to the campsite will also remain. There is an item that prevents you (once) from losing your gear, but it's quite expensive and should only be bought when you're ready to make a very serious run at things. Like in any good roguelike, you're going to have to rely on careful planning, quick thinking, and a bit of luck if you want to win. 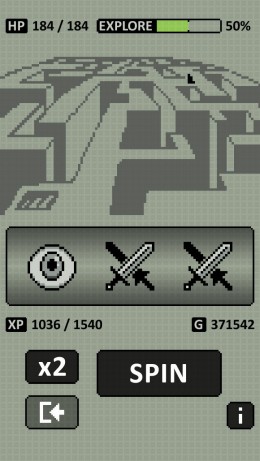 The slots themselves, if you pay careful attention and have fast reflexes, are actually not the main luck element to the game. The NPCs you meet, the enemies you fight, and importantly, the equipment you earn are all subject to the random number generator gods, and all will have a major effect on the outcome of your run. Slightly less luck-reliant are the level-ups, which will offer you a choice of various effects and upgrades, but should you not like what you see, can be rerolled to give you some different choices. You can't even really grind that much, because each time you beat a foe, they'll be stronger the next time you fight them, making even the first floor a tough challenge eventually. All in all, while it doesn't have the dungeon exploration that usually comes with a roguelike, that's really the only thing missing. This game certainly brought back feelings of playing Shiren the Wanderer for me, despite the differences.

Another area where this game has made huge strides over its predecessor is in the extra areas outside of the tower itself. The camp actually has a purpose now beyond showing the credits, allowing you to prepare food and weapons, increase the healing effect of camping in the tower, and eventually power-up a dog you can befriend. The biggest upgrade is the tavern, however. It's still a great place to go to restore your health and improve your stats, but the developer has added a ton of mini-games in here, from drunkenly dancing on the table to fighting off zombies in the cellar. I was kind of amazed at how many little extras were crammed in here, some coming with absolutely hilarious animations.

Tower of Fortune 2 certainly has personality to burn. The monochrome graphics might come off a bit cheap to newcomers, but they were clearly aiming to capture the look and movement of old LCD games, and they more than pull it off. There are so many more animations in this game compared to the first that the whole thing just oozes with charm. The music and ambient sound effects also do a nice job of establishing the mood, whether it's a crowded tavern or a battle with a huge boss. The NPCs have interesting designs and personalities (and sometimes a little familiar, like the time travelers), though the monsters themselves still look a little goofy.

I find myself writing a bit of a long review again, and I think you guys know what that means. This is a really great game. So many games drop the ball with their sequels, changing too little or too much, leaving fans of the original feeling a bit let down. Every so often, though, you get a sequel where they take the ball from the first game and just run like crazy with it, improving in every way. Tower of Fortune 2 is one of those sequels. It looks better than the first, it's deeper than the first, it has a massive amount of content in comparison, and hey, it even manages to be somewhat less of a grind.

If you liked Tower of Fortune, this is a no-brainer. The sequel is everything that game was and so much more. If you haven't played the first game, I'd almost say there's no point in doing so now that this is here. If you don't like roguelikes, stay away, but otherwise, this game is well worth playing.