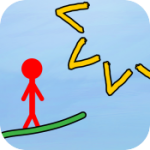 Kevin Calderone's original Trace [Free] was one of those early App Store games that made you go "aha!" as you realized the sorts of experiences the newfangled touch interface of iOS devices could offer. Trace was a simple game in a visual sense, utilizing a stick-figure main character and level environments that could be confused for grade school refrigerator art, but it had a ton of charm. It was a pretty simplistic game in a mechanical sense too, as the ultimate goal was to get your little stick dude from one side of a level to the endpoint at the other. Along the way there are hazards to negotiate, and you'd accomplish this by literally drawing your own platforms in order to make your way by them. It was a novel idea for iOS at the time, though similar mechanics had been used with the Nintendo DS touchscreen. Still, the original Trace was a simple, clever and challenging title in a burgeoning world of smartphone gaming.

Today, nearly 5 years to the day after the original game's launch, Trace 2 [$2.99] is now available in the App Store. As you can imagine, it follows in similar footsteps as its predecessor, tasking you with drawing platforms on your way to reaching the end goal of each level. This time around the game embraces its simplistic visual style, improving things significantly while still keeping the graphics lighthearted and child-like. Check out the launch trailer.

We took an early version of Trace 2 for a spin at GDC earlier this year, and appreciated how the game remained grounded in its original ideas while expanding on them in new and interesting ways, like levels based on audio cues as demonstrated in our hands-on video. I have fond memories of the original Trace back when I was an App Store infant along with everyone else, so I'm definitely feeling sentimental and excited about diving into Trace 2 and checking it out. Also, don't forget you can find more impressions from players in our forums.

Update: I didn't realize this at first, but the original Trace received an update today adding Retina graphics and remastered sound, if you want to take that trip down memory lane with a fresh coat of paint.