Well, hey, nothing quite grabs attention like putting pants in the title, right? The latest from 10tons, the publisher behind recent romps Sparkle 2 [$4.99] and Joining Hands 2 [$2.99], Trouserheart [$2.99] has the cute premise of a king searching for his stolen slacks. The game itself is an overhead hack 'n' slash with most of the trimmings you'd expect from that genre. It's a well-worn genre on the App Store, so it takes a bit more than a humorous title to make a splash with iOS gamers.

As the game starts, you get a funny little cutscene showing the crime that kicks off the adventure, showing some monsters crashing your throne room and swiping your trousers as you sleep. After that, you get control of King Trouserheart, and can now test every single move you will ever have access to. The good King can move around using a virtual stick, and attack with a virtual button. There aren't any combos or unlockable moves, and I think fans of the genre can already see some things starting to go wrong here.

The first big problem with Trouserheart is that the gameplay just isn't very deep at all. It's certainly possible to have a deep experience with just one stick and a button, but it doesn't happen here. You just move the king around, rather stiffly, point towards the enemies, and hit the attack button until they're dead. The absolute most the game will ever ask of you is to sometimes move around to the other side of the enemy to avoid an attack or hit a weak spot. As you defeat enemies, you can collect coins which allow you to level up the king in four different categories, but this just makes him hit harder, block more attacks, gives him more health, or increase the gold drop rate. 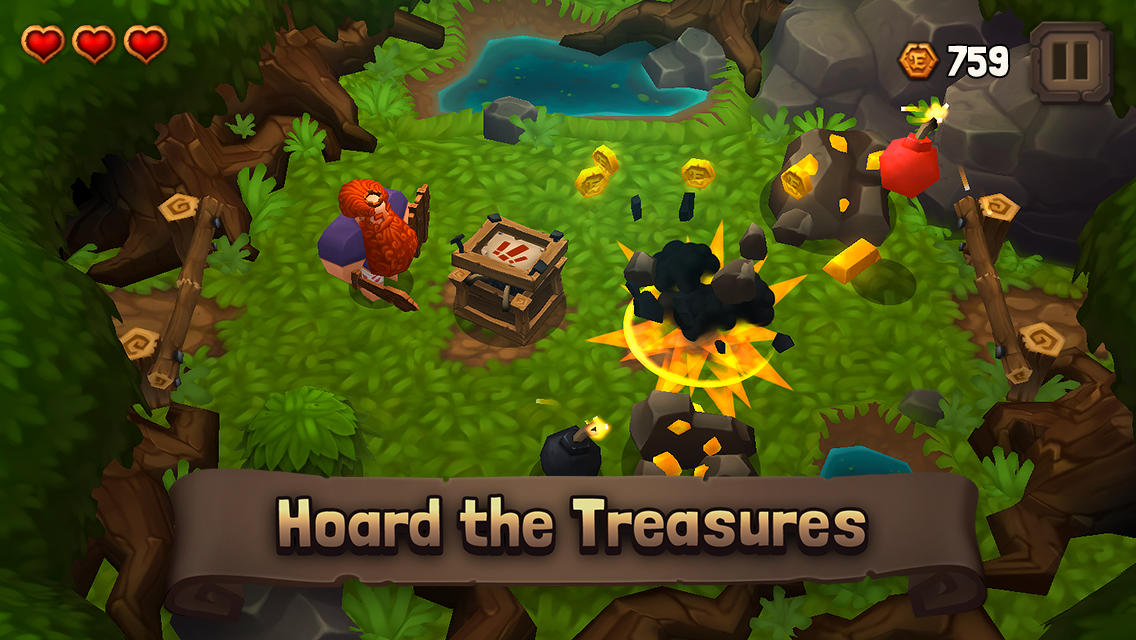 At certain points along the upgrade paths, you'll earn a visual change to your equipment, though your lower half will always be covered by heart-patterned boxers in the proud Arthurian tradition. Unfortunately, this is the only equipment change you'll come across in the game. Enemies and chests in the game do not drop loot, just cash. With random loot being a vital part of the greats of this genre, it's a disappointing omission. Taken with the simple mechanics, it's clear Trouserheart aims to be a very simplified and streamlined experience.

The levels themselves, all ten of them, are made up of chains of single rooms. The contents of each room are random, which lends the game a bit of rogue-like spice, though given that pick-ups are entirely limited to cash and heart refills, it takes some of the buzz off. As well, the rooms are quite small relative to the enemies and the king, and while that is occasionally used to create a tense positioning challenge, it really just means you can face in the general direction of the enemy herd and just smash the attack button until they're all dead. Stages go by pretty quickly, which is good for pick up and play sessions, but not so good for the long-term appeal of the game. Even taking the bonus treasure chest mini-stages into account, you'll be hard-pressed to take longer than an hour or two to complete Trouserheart.

The game does, at least, offer a couple of options to spice things up. There's a hard difficulty setting, which doesn't change enemy behavior but does make enemies stronger and more numerous. Interestingly, there is also a perma-death mode, where if you run out of hearts, you're done, no continuing. Like the randomized rooms, it's an odd little artifact from rogue-likes that proves somewhat pointless due to the lack of loot and items. In most games that use perma-death, it's exciting and tense because you risk losing things that you happened to receive by chance, and you have to balance conserving your resources with using them to survive. In Trouserheart, for all intents and purposes, every run-through is going to be the same, reducing perma-death to mere annoyance. Or it would, if you risked actually dying in the game, but unless you're really careless, it's a completely empty threat.

The visuals have a good bit of personality to them, though the animation is somewhat weak, with the king's walk looking every bit as stiff as it controls. The enemies have a lot of character to their design, kind of dangerous, yet cute. There are a few different visual themes for the levels, giving a little variety to the jaunt. The music is fine, though quite forgettable, and the rest of the sound design more or less follows that pattern. I do like the color choices quite a bit. It's a very bright game, and everything stands out well. Aside from the odd animation, I can't say I've got many complaints at all with the aesthetics, which makes the dull gameplay all the more unfortunate.

I didn't have a bad time with Trouserheart. The premise was silly fun, it wrapped up in an amusing way, and it's not offensive to play by any means. That said, it's very light on content and substance in general, with simple, shallow gameplay, limited character building options, and a small number of stages. It's got a nice sense of humor and polished visuals, but that's not enough by a long shot when there are things like Iesabel [$0.99] and Dungeon Hunter 4 [Free] about. I don't want to accuse the game of being a slacks-er, but it's just pants in comparison.