Alongside a major version 3.0 update that rolled out to its iOS app [Direct Link] earlier this week, Turner Classic Movies has also expanded support for its "Watch TCM" app to tvOS devices. Now the app can be downloaded to the fourth-generation Apple TV and fifth-generation Apple TV 4K, with thousands of classic films available on demand. 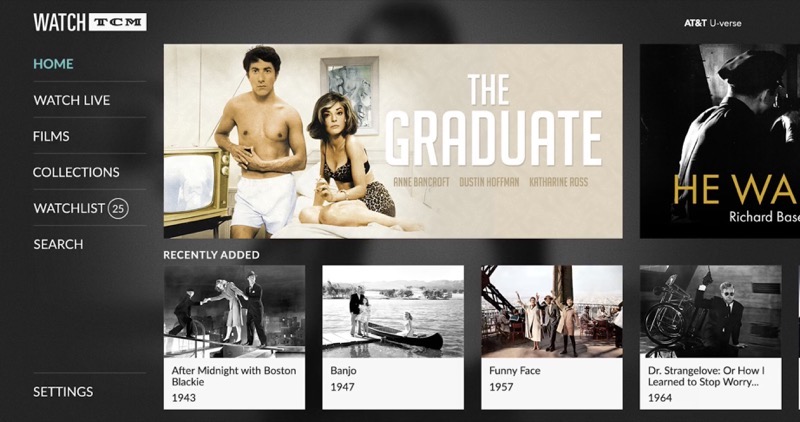 You'll need to have TCM already on your current cable or satellite TV package, and then once you sync the app to your log-in information you'll get access to its content. This includes two live streams for the east and west coast feed of Turner Classic Movies in addition to the on-demand movies.

Turner Classic Movies presents WATCH TCM, a “TV Everywhere” service that lets you enjoy unlimited access to the best of TCM, at no additional cost with your TV subscription. Not your ordinary “TV Everywhere” service, WATCH TCM is a content rich and in-depth movie companion that lets you experience the richly textured world of classic movies that only Turner Classic Movies can bring you.

The company says this back catalog includes "nearly every title playing on TCM," including introductions by special hosts like Ben Mankiewicz. Both live and on-demand movies are presented uncut, commercial free, and in their original aspect ratios.

The app also features articles, cast and crew information, photo galleries, short films, film collections ("Birthday Tributes", "31 Days of Oscar", "Silent Sunday Nights", etc.) and more. All of the films can be added to your Watchlist so you can keep an organized list of what you want to watch next, but the app doesn't appear to integrate with Apple's TV app as of yet.

Watch TCM differs from Turner Classic Movies' film streaming service "FilmStruck" since it connects to your pre-existing cable subscription. FilmStruck is a standalone subscription service that starts at $6.99/month and raises to $8.25/month ($99 billed annually) and includes most of TCM's classic films as well as the Criterion Collection. The app first debuted on the fourth-generation Apple TV in late 2016.